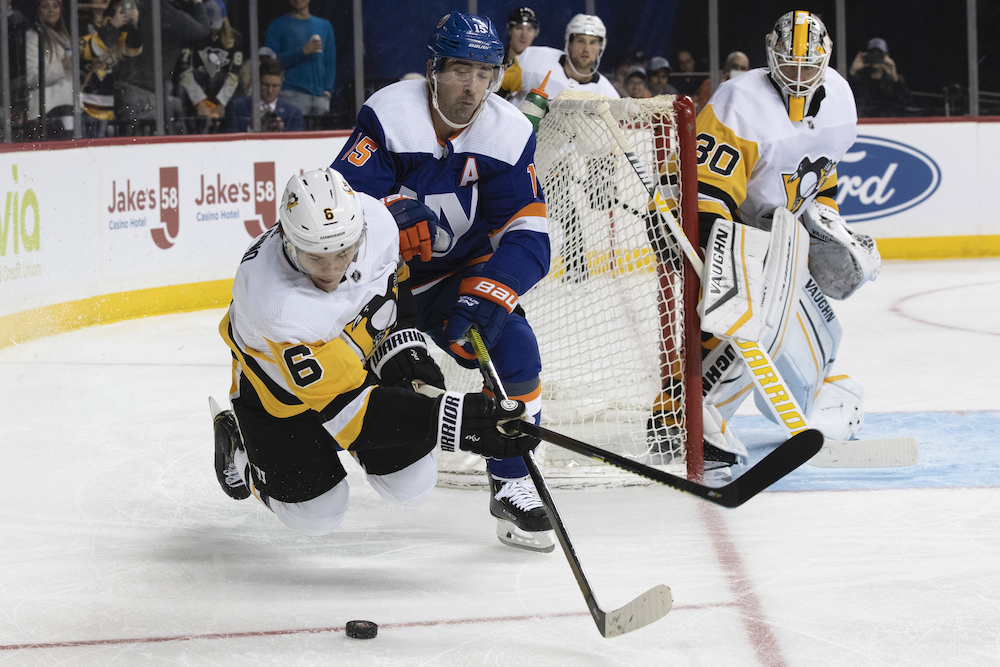 NEW YORK -- There was, the Penguins said, no panic in their dressing room after 40 minutes. No undue concern, even.

Consider that testimony to their composure and professionalism.

Or maybe just evidence that they hadn't been paying much attention during the first two periods. Because if they had been, they'd have realized what a precarious situation they were in. They were on the road. Down three goals to a team that had won 10 consecutive games and is allowing barely more than two per game. Burdened with a power play whose most recent goal was filmed in black-and-white.

Coming back was improbable. Illogical. Or, the way the Penguins saw it, darned close to inevitable.

The mood in the locker room then, Bryan Rust said, was "very businesslike."

Perhaps they sensed that all it would take was a little shuffling of the forward combinations, an otherworldly save and an overtime game-winner, and they'd be able to leave Barclays Center with a 4-3 victory over the Islanders Thursday night.

Rust put the exclamation point on their latest unlikely comeback at 3:25 of the extra period, when he stole the puck from New York's Brock Nelson behind the Islanders net, then swung around the left post before throwing a shot past goalie Semyon Varlamov and into the far side:

"We were able to cause a turnover," Rust said. "And I just took it to the net."

Gee, he makes it sound so easy.

That was Rust's second goal of the game -- not enough to earn him recognition as one of the game's three stars, by the way -- and while his first had been critical because it sliced New York's lead to 3-2, it was largely overshadowed by a save Matt Murray made a few seconds earlier:

He was on his stomach in the crease, but managed to throw up his left leg and knock down a point-blank shot by Anthony Beauvillier that, had it reached the net, almost certainly would have choked off any comeback the Penguins were planning.

"He wasn't in any rush to put it in the net," Murray said. "That usually means they're going to take a second and try to get it up."

So Murray got his leg up to meet the puck. And to keep the Penguins' hopes of salvaging a point or two viable.

"That save he made, that changes the outcome of the game," Mike Sullivan said. "That's the timely save we need to win games."

The Penguins still needed another goal to force overtime, and Evgeni Malkin provided that at 8:48, backhanding in a rebound from near the inner edge of the right circle:

That was the third of four goals by members of the reconfigured second line, as Sullivan put Jared McCann with Malkin and Rust before the third.

"It was obviously a good line for us," Sullivan said. "They were dynamic in the third period."

From their first shift together, actually, as McCann triggered the Penguins' rally by scoring at 1:38 of the third.

"Our goal was just to come out for the first shift of the third and try to slowly get one," Rust said. "To be able to get that quick one was huge."

Necessary, too, in part because the Penguins not only failed to score on their first of two power plays, but gave up a shorthanded goal to Cal Clutterbuck that put New York up, 2-0, at 6:28 of the second.

The Penguins are now in a 0-for-23 slump with the man-advantage and have gone 10 consecutive games without a power-play goal for the first time in franchise history. That's something that never happened to, say, the 1983-84 club -- that's the one that finished with all of 38 points -- let alone any of the other squads whose members got to see playoff games only through the miracle of cable TV.

And none of them could send the likes of Sidney Crosby, Jake Guentzel and Malkin, among others, over the boards when the opponent is assessed a penalty.

Which, if the Penguins' power-play miseries persist much longer, other clubs might start asking the referees to do for even the most marginal infractions.

"Obviously, we want to get it going," Sullivan said. "We have some talent. The challenge has been to try to get some consistency, because we've had so many guys coming in and out of the lineup, with injuries."

On this night, at least, it didn't cost them any points, if only because the Penguins refused to accept how grim their outlook was when the second intermission arrived.

"This wasn't the prettiest win for us," Sullivan said. "But I certainly give our players a lot of credit for their resilience."