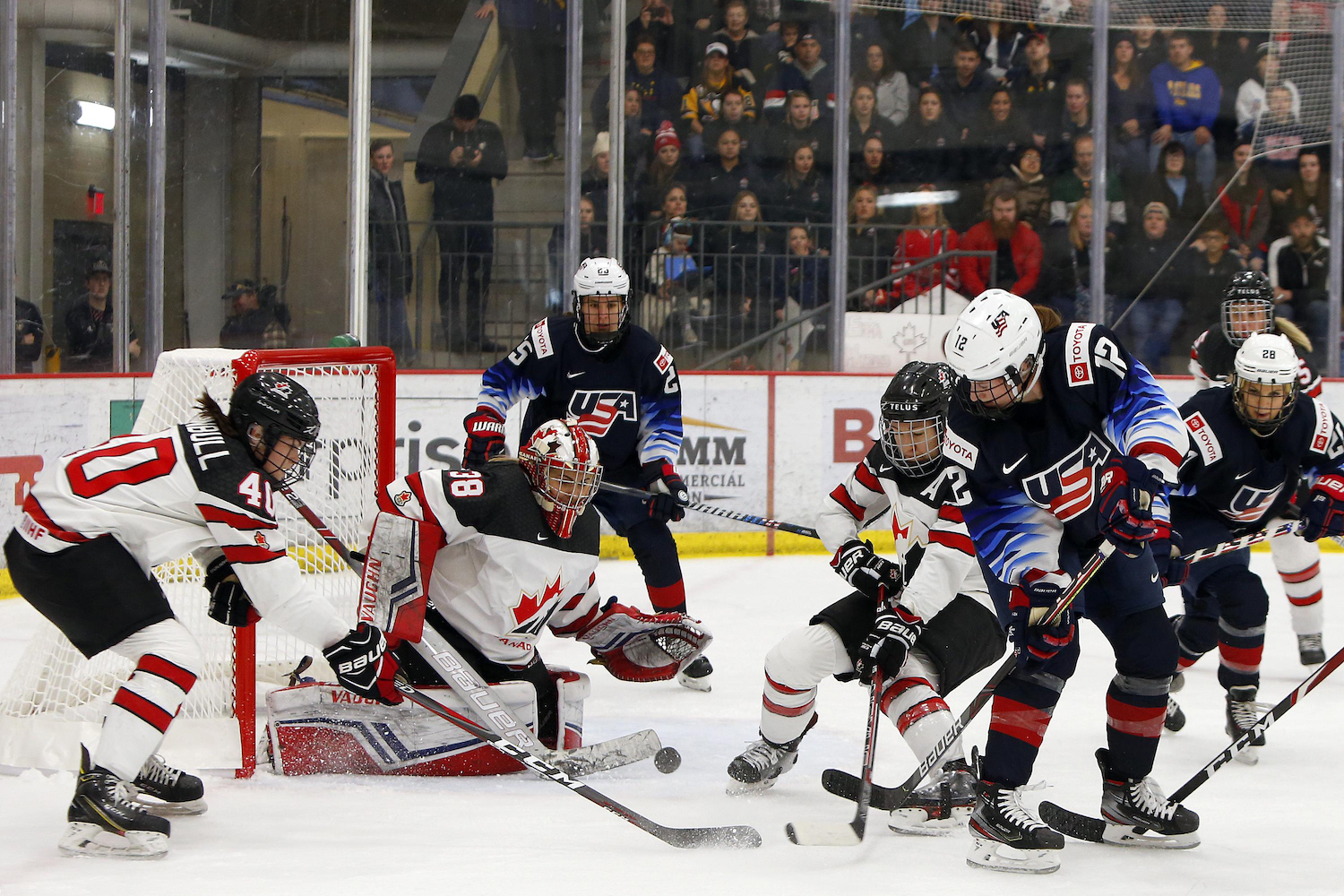 CRANBERRY, Pa. -- Team USA nearly rallied from an early three-goal deficit but ultimately fell to Canada, 5-3, in the second and final game of the joint women's camp at the Lemieux Complex in front of another sellout crowd on Sunday.

After Game 1 on Friday, a 4-1 win by Canada, the message from the Americans was that the team came out "flat" after they trailed 2-1 and were outshot 10-5 in the first period, and they were unable to dig themselves out of the early hole after they were able to build some momentum.

Sunday's Game 2 saw another flat, perhaps more flat start from the U.S. as they dug themselves into another early hole.

"It was a disappointing weekend," said U.S. head coach Bob Corkum. "We looked in disarray a lot of the time and the compete level was not there so we have some work to do."

Canadian forward Emily Clark, a 23-year-old recent graduate of the University of Wisconsin, opened the scoring for Canada 5:51 into the game with an unassisted goal that just trickled past U.S. goaltender Kaitlin Burt:

Then four minutes later, Canada extended its lead to 3-0 on a power play after Burt stopped an initial shot from Blayre Turnbull but was unable to stop the rebound chance from Natalie Spooner:

Team USA was outshot 12-5 in the first period. The two teams looked much more evenly-matched in the tight, scoreless second period, then the U.S. came out to start the third period looking the fastest and strongest they did all series.

After a number of quality chances to start the third, Kendall Coyne Schofield finally broke Maschmeyer's shutout at 3:26 of the the third period to get the U.S. on the board:

Just as the Americans seemed to be building more momentum, defender Megan Bozek was called for roughing and sent the U.S. to the penalty kill. Just over a minute into the Bozek minor, Clark scored for Canada on the power play to regain the three-goal lead. It was her second goal of the game:

Seconds after Clark's tally, a Renata Fast crosschecking minor put the U.S. on the power play and gave the team some life. Forward Dani Cameranesi got a deflection on the power play to cut Canada's lead to two:

After Cameranesi's goal, Canada again took a quick penalty as Lauriane Rougeau was called for interference, and again the Americans capitalized, this time with a Kelley Panek goal from the left circle:

As the U.S. was continuing to build momentum, they were gifted a golden opportunity when Canada's Kristen O'Neill was called for crosschecking with 5:42 remaining in the third period, as the U.S. trailed by one. Midway through the U.S. power play, Clark powered her way through two U.S. defenders to get a breakaway. Burt came far out of her crease to challenge Clark and failed, giving Clark an empty net and her third goal of the game:

"It feels a little surreal right now," Clark said of her hat trick. "It's not typically my role, I like to work hard and bump and stuff. I'm super excited to get rewarded like that, but more excited to come out with the win. I'm really proud of us for coming out with the win, but also how we came out with it. We showed a lot of character."

Clark had an incredible game, looking strong on both of Canada's special teams, had some good defensive plays to help break up the Americans' passing and also led all players in shots, with six.

"It was awesome, the best thing about it is scoring three goals like that, but doing it the right way," Canadian coach Troy Ryan said of Clark's game. "She battled hard. That's sort of what you expect from her with the way she plays and it's nice to see her get rewarded with it."

Even though these games were technically exhibition, the U.S. players were heated after their poor showing in both games. It's never just exhibition when these two come together.

"I think we played two good periods, four bad periods," Coyne Schofield said of the weekend. "Every time we have the opportunity to play together we need to bring that excitement, and I don't think we brought that excitement from the start. Obviously Canada capitalized on those moments where we didn't come out and didn't start on time. We need to take a hard look at ourselves in the mirror and go home. Unfortunately we're not always together to get better every day, but when we get the next opportunity we have to be better."

This series functions as a preview for the rest of this season's meetings between U.S. in Canada, which include the five-game Rivalry Series in the winter and the World Championship in the spring. The Americans will take the lessons learned from these games and look to have a better showing in those tournaments.

"We evaluate ourselves and move forward to the next training camp that we have," Coyne Schofield said. "It's challenging not being together all the time, but there's no excuses for our effort and our effort wasn't good enough."

• I said it last game as well, but anyone who thinks women's hockey isn't physical because of the lack of outright bodychecking hasn't actually seen the women's game, and definitely hasn't seen the physicality of a U.S.-Canada matchup.

• The officials were busy, with a total of 24 infractions -- 12 each -- being called in the game. Both teams had eight power play opportunities, and both teams went 2-for-8.

"There was a lot of special teams play," Clark said. "We were able to capitalize a couple times, but you can never be too good on special teams. In games against the U.S., when it's a little emotional like that, you'll see the power play and P.K. a lot. We can continue to work on that, that'll be huge for us."

• The U.S. did a much better job of limiting Marie-Philip Poulin, arguably the best women's player in the game, in this one. She was held scoreless and with only two shots.

• Megan Keller and Alex Carpenter each led the Americans with five shots.

• Nick Bjugstad was at the game with his wife and seven-month old daughter. The Bjugstads know Team USA forward Emily Matheson (formerly Pfalzer) from their time in Florida, where Matheson's husband Mike plays.

• Hayley Scamurra, Team USA forward, was lost in the first period after she crashed awkwardly into the boards and had to be helped off the ice. It was tough to see what exactly hit the boards from our angle and the angle of the video feed, but the loud bang sounded like it was something hard that hit, like her helmet. Team USA coaches didn't have an update on her after the game as she was still being evaluated, but she was walking around in street clothes after.

Team USA’s Bob Corkum went with all new lines and pairings, aside from the Keller - Cayla Barnes pairing:

And for Troy Ryan‘s Canadians, the same lineup as last game:

This was it for the joint camp in Cranberry. The two teams will meet next on Dec. 14 in Connecticut and Dec. 17 in New Brunswick for the Rivalry Series, then again on Feb. 3 and 5 in British Columbia and Feb. 8 in California. The World Championship will be from March 31 to April 10 in Nova Scotia.

Visit our women’s hockey page for everything.