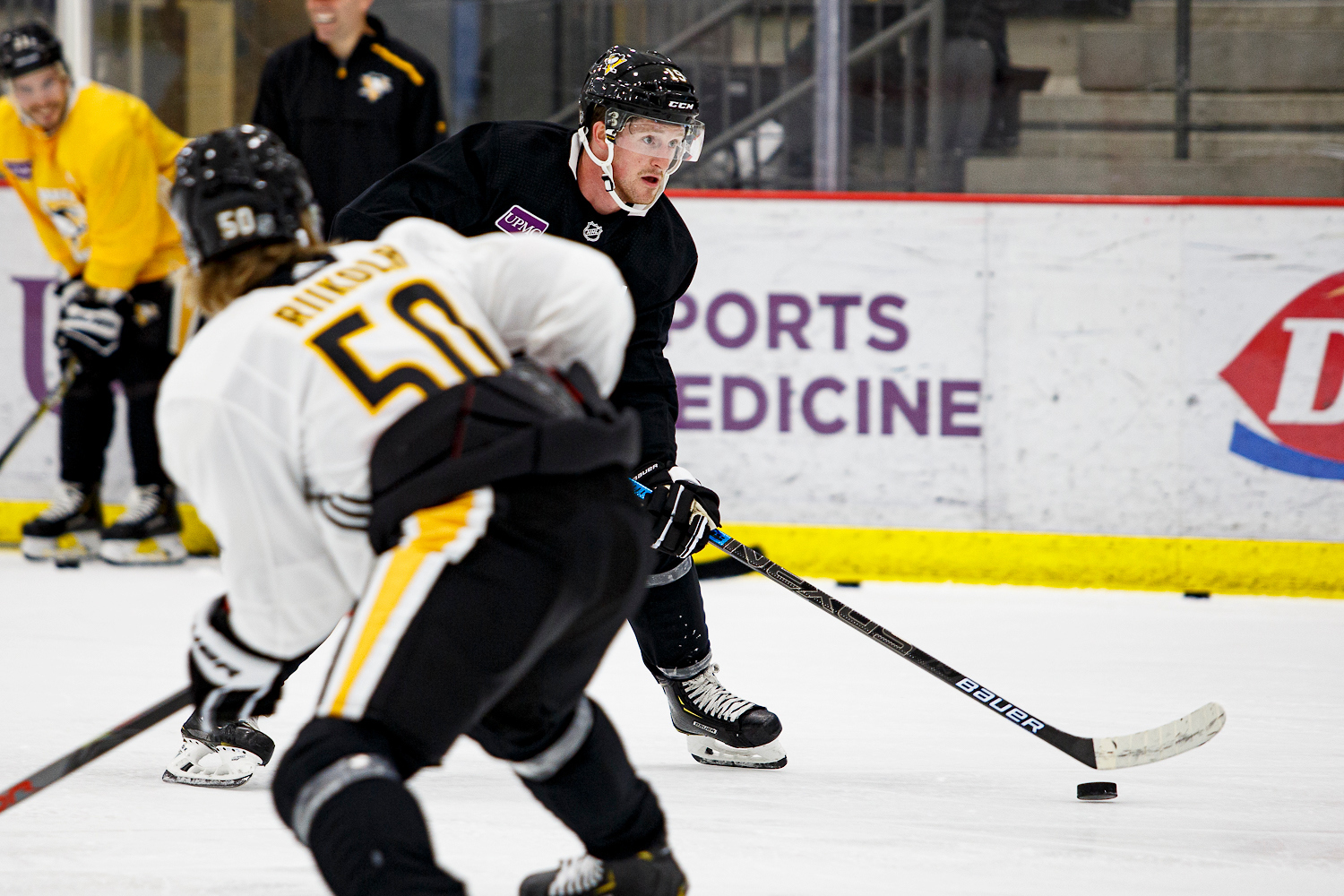 CRANBERRY, Pa. -- Sidney Crosby was not on the ice for the Penguins' practice on Monday morning at the Lemieux Complex.

After practice, Mike Sullivan said Crosby was still being evaluated and would not play Tuesday against the Rangers in New York, or make the trip with the team. When asked if Crosby's injury could potentially be long term, Sullivan said he didn't know.

"All I know is he's continuing to be evaluated," Sullivan reiterated. "When I have further information I'll update you."

Crosby left after his first shift of the third period of the Penguins' win over the Blackhawks on Saturday with what appeared to be a lower-body injury. When he was seen after the game, he had a slight limp but was wearing no visible aids like a boot or a brace.

With no Crosby, Jared McCann was promoted to first-line center, leaving the lines looking like this:

"I think I'm going to have to just keep playing my same game," McCann said of being on the top line. "I'm not going to change anything. We're going to create opportunities for ourselves and play well defensively. I feel like that's something we've gotten away from these last couple of games. I know I can be better, and we can do it."

Even though McCann is in Crosby's spot in the lineup, he said that he in no way has the mindset that he's "stepping in" for Crosby.

The move shifts McCann over from wing to center, something he's done in the past and feels comfortable doing.

"He's a good player," Sullivan said. "He seems to respond well, when we've put him in the middle he's played really well there. I think it's a test of our depth, not just on our roster but within the organization as well. Jared's a player that when he's been given an opportunity to play a more significant role, he's responded in a positive way. We're going to need him to do that tomorrow."

The unit also did some work that was five-on-none, something that is a little unusual in a practice setting. If it works out in a game that the other team forgets to send any penalty killers out, the Penguins look to be in good shape.

But seriously, with the 0-for-26 streak and Crosby out, it was probably good for the power play to start simple like that and work out the basics.

Sullivan was asked how the power play looked in practice.

"Well, you know, it's, uh ... I don't know how to respond to that," he said. "We scored some goals, so that's progress. As I said to our guys, I said in any team concept or team strategy, when you struggle I think part of the solution, part of getting out of it is simplifying everything you do. That's what we talked about. Let's shoot the puck more, let's get traffic in front of the net, let's see if we can create next opportunities from shooting the puck. As long as we do that and we retrieve pucks on the rebounds and we work our way through it, I think we're going to score goals."

At least for the next game, they'll have to do that without Crosby.

• Aside from Crosby, all players who played on Saturday were on the ice for practice. The injured Kris Letang (week-to-week) and Patric Hornqvist (longer-term) were not, but they stood on the other side of the glass in street clothes while the Penguins worked on special teams, banging on the glass like fans. Letang applauded the power play after it was over, so expect it to be fine now.

• Andrew McCutchen was in the building.