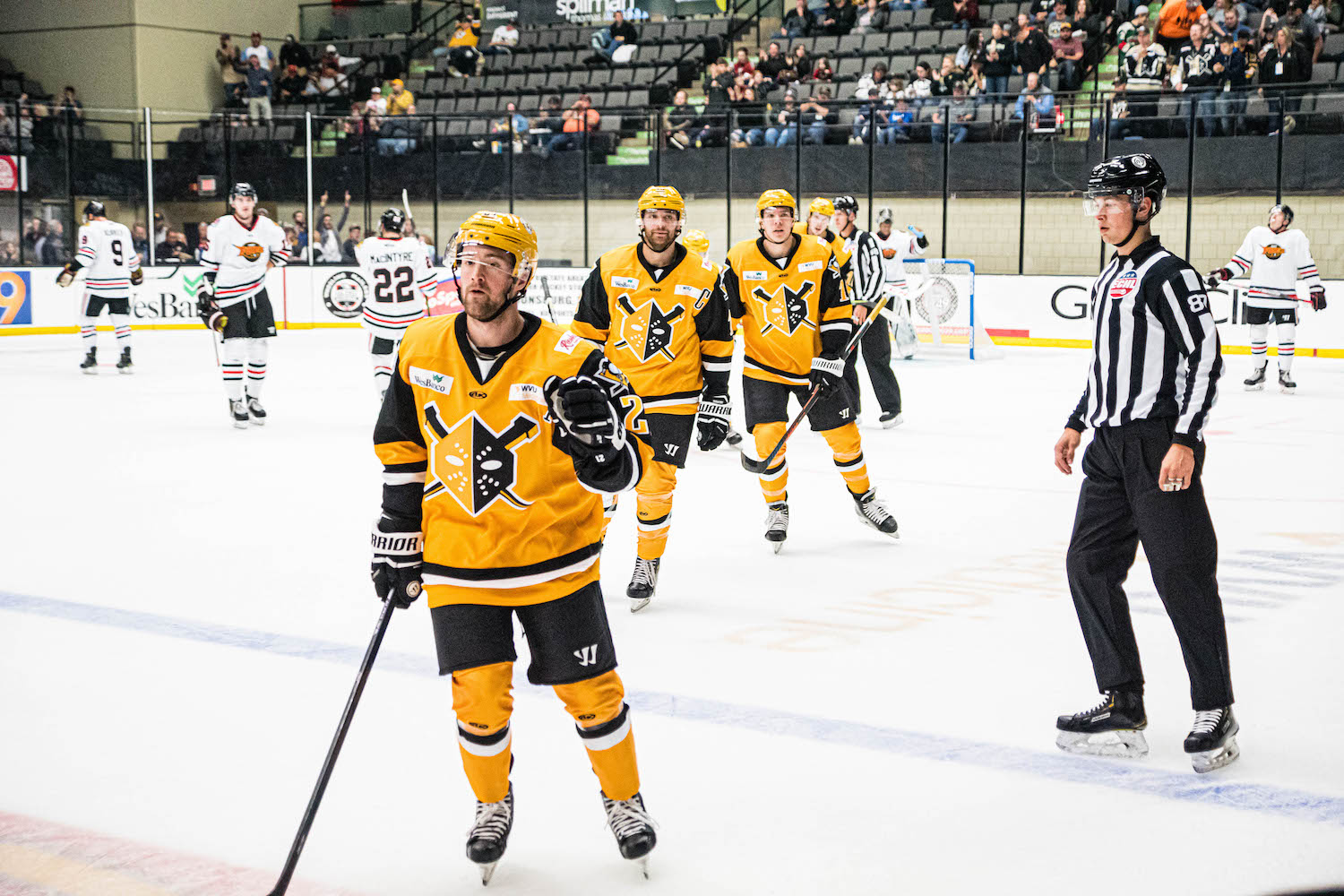 The current longest-tenured active Nailers player is the speedy center Cam Brown, back for his third season with the team.

Brown, 26, first joined the Nailers in his first pro season back in 2017-18, when he finished No. 4 in team scoring with 17 goals and 36 assists in 55 games. During that season he earned two AHL stints, a 13-game tryout with the Springfield Thunderbirds and a one game callup with Wilkes-Barre/Scranton.

Last season, Brown became more of an AHL regular, splitting his time between Wheeling and Wilkes-Barre. He played 35 games in Wheeling and put up nine goals and 28 assists, then played 30 games in Wilkes-Barre primarily in a fourth-line role, scoring one goal and five assists.

Brown re-signed in the organization late in the offseason on an ECHL deal with the Nailers, confident after his extended AHL time last year.

"I'm excited to be back, it's nice being one of the returners," Brown told me this week. "I can be myself, be comfortable and confident."

Brown currently ranks No. 4 on team scoring with four goals and seven assists in 10 games, and has been centering the top line between Renars Krastenbergs and Jan Drozg as of late, a line that has showed great chemistry early on. Brown's one of the best (if not the best) playmakers on this team, and pairing him with two naturally strong finishers has led to some great plays. And with Brown's speed being one of his greatest assets, it's been good to see him have fast wingers who can keep up.

"It's really nice, I've been playing with Janny and Krasty a lot," he said. "Janny flies, a young guy with a ton of talent and a ton of upside. It's going to be fun to see him blossom. ... Those guys like to put the puck in the back of the net. It makes it easy for me to go into different areas and spots because they want to score."

Averaging about a goal every other game, Brown is scoring at a higher rate himself, as well. He scored this goal this week in Toledo off of a feed from Drozg:

"I think a little bit I'm trying to be more conscious of shooting more, I always tell myself that every year but maybe I'm doing it a little more this year," he said. "I think another thing is just being comfortable, confident at the rink, off the ice, with the guys. Sometimes that can help bring that level of confidence on the ice."

Every year the ECHL moves more toward a fast, skilled game and away from the reputation of a low-skilled, fighting league it once had. That's why you see players like the 5-foot-7, 160-pound Brown able to succeed, along with the fast and skilled linemates he has.

"I think there's a lot of skill and talent in the league," Brown said. "I think even more this year, you're noticing how fast the game is and how fast all these young kids are that are coming in every year."

Brown's goal, obviously, is to make it back to the AHL. With Wilkes-Barre's forward depth, it would be tough to get that shot in this organization this season, which means the opportunity would likely come in the form of a tryout contract with another organization, like he did with Springfield as a rookie. He's fighting for that chance this season, wherever it may be.

In the meantime, Brown's focus is going to be helping the team make a push for the playoffs for the first time since 2016, something that means more to him especially as a third-year player.

"That's the goal of ours as a team, to get there and compete for a championship," he said, "Especially, being a guy returning after the first two years I've been here, I definitely want to make it."

• Nov. 6: at Toledo, 5-4 overtime loss
The Walleye opened the scoring at 5:45 of the first period, and Jan Drozg answered 29 seconds later with his team-leading fifth goal of the season. The Walleye regained the lead 1:51 later, and Cam Brown tied the game with 1:28 remaining in the period.

Defenseman Steve Johnson scored a shorthanded goal 6:54 into the second period, his first goal of the season, and Ryan Scarfo extended the lead 2:18 later with his first of the year. The Walleye scored to come back within one before the end of the middle frame.

The Walleye scored the lone goal of the third period on a power play to send the game to overtime, and scored 1:21 into overtime to get the win.

The Nailers went 0-for-2 on the power play and 2-for-3 on the penalty kill.

Scarfo scored an empty net goal, his second of the game and third of the season, to seal the win.

The Nailers went 1-for-2 on the power play and 3-for-3 on the penalty kill.

• Nov. 9: at Reading, 6-4 loss
The Royals took the early lead in the second game of the home-and-home series, 1:52 into the first period. Krastenbergs tied the game with his second of the weekend and third of the year midway through the period on a power play, and Drozg scored his sixth of the year to give the Nailers the lead.

The Royals scored twice in the third period to earn the win.

Jordan Ruby took the loss with 35 saves on 41 shots.

• The Nailers’ record of 5-4-1 has them sitting in fourth place in the six-team Central Division, four points out of first place.

Drozg scored this backhander on Wednesday:

Scarfo scored on a breakaway:

Krastenbergs just walked his way through the Royals' penalty kill:

SAVE OF THE WEEK

3 words. Nailers. Batman. Jerseys.
Nov. 17th watch Batman battle with the Joker on the ice and then take home one of those wicked awesome Batman sweaters!
BUY TICKETS: https://t.co/r3xnbq4TcJ
These will be available day of game via mobile auction! pic.twitter.com/5MzW0qmz7B

Share
Tweet
Email
Another blah start, another big rally … and not enough in OT ☕
Prospect Watch: Tracking down the Finns