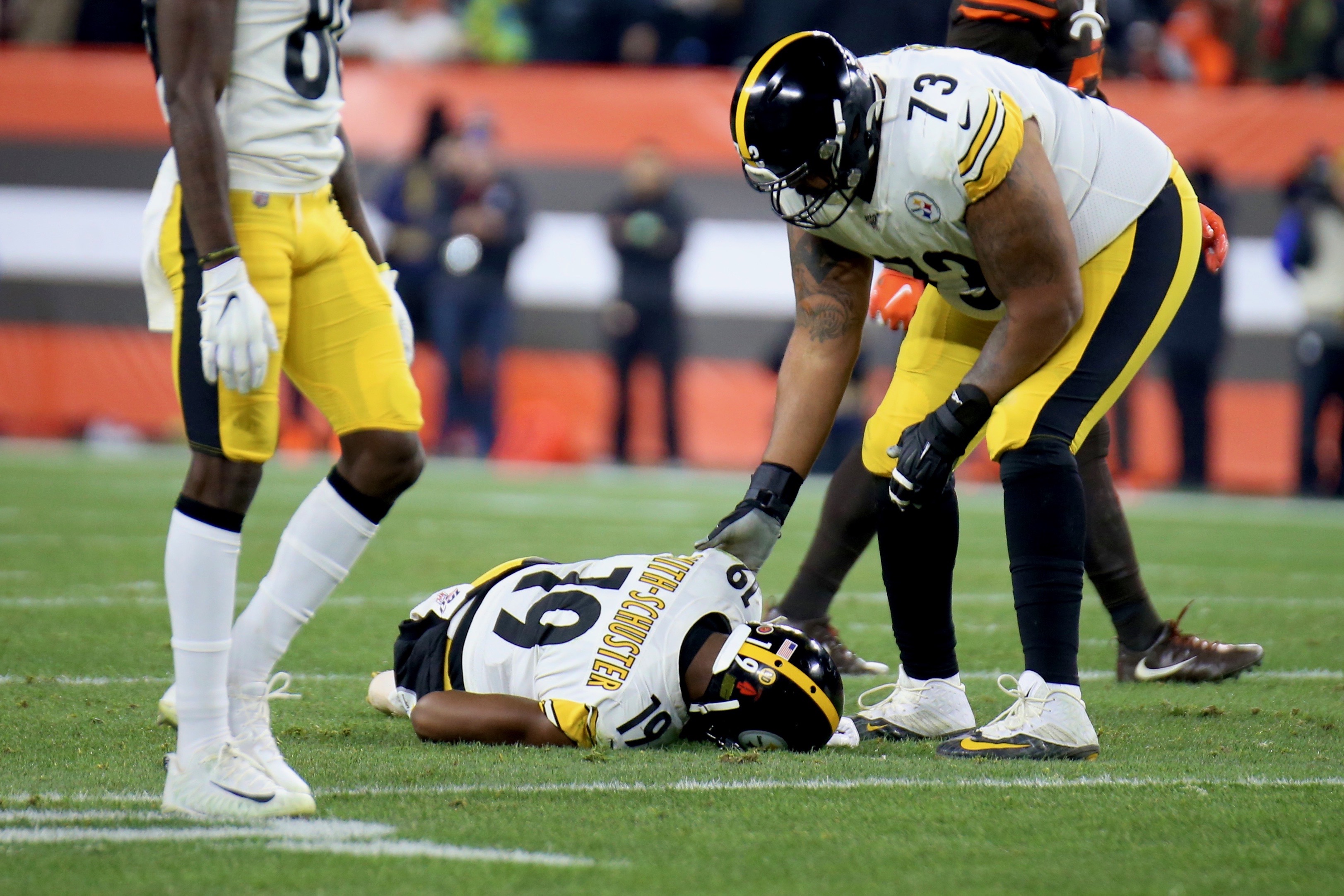 CLEVELAND -- The Steelers not only lost a football game Thursday night at FirstEnergy Stadium, they suffered a bevy of serious injuries, as well.

Wide receivers JuJu Smith-Schuster and Diontae Johnson were knocked out of the 21-7 loss to the Browns with concussions from helmet-to-helmet hits, while running back James Conner aggravated a shoulder injury that had kept him out of the previous two games.

Smith-Schuster was injured in the second quarter on this hit by safety Morgan Burnett and cornerback Greedy Williams.

Smith-Schuster was down for several minutes before being helped from the field. He did not return and finished with two catches for 21 yards.

Midway through the third quarter, Johnson was drilled in the helmet late on this attempted catch by Damarious Randall.

Johnson, like Smith-Schuster, was down for several minutes and was bleeding from his right ear. Randall was ejected, becoming the fifth player ejected this season for such a hit.

"It was hard. Those are those guys," said fellow receiver James Washington. "I hate to see guys go out of the game. It’s quite simple. Guys have got to step up and play that role."

The injuries to Smith-Schuster and Johnson left the Steelers with only Washington, Johnny Holton and Tevin Jones, activated from the practice squad earlier in the day when Ryan Switzer was placed on injured reserve because of a back injury, as the Steelers' only healthy receivers.

Conner left near the end of the first quarter after gaining just 10 yards on five carries and catching one pass for six yards. That left Jaylen Samuels, Trey Edmunds and Tony Brooks-James to carry the ball in the game. Edmunds and Brooks-James have both been signed off the practice squad in the past month.

"I mean, we’d been doing well the past couple weeks. There’s a couple guys we didn’t have this week, and it kind of affected us a little bit," said center Maurkice Pouncey. "But there’s no excuses, man. We’ve got to go out there and complete passes. We’ve got to block guys and run the ball, man. We’ll look at the film.”

The Steelers gained just 236 yards in the game.

Also injured were linebacker Ola Adeniyi (concussion) and cornerback Artie Burns (knee). Both got hurt covering punts and did not return.