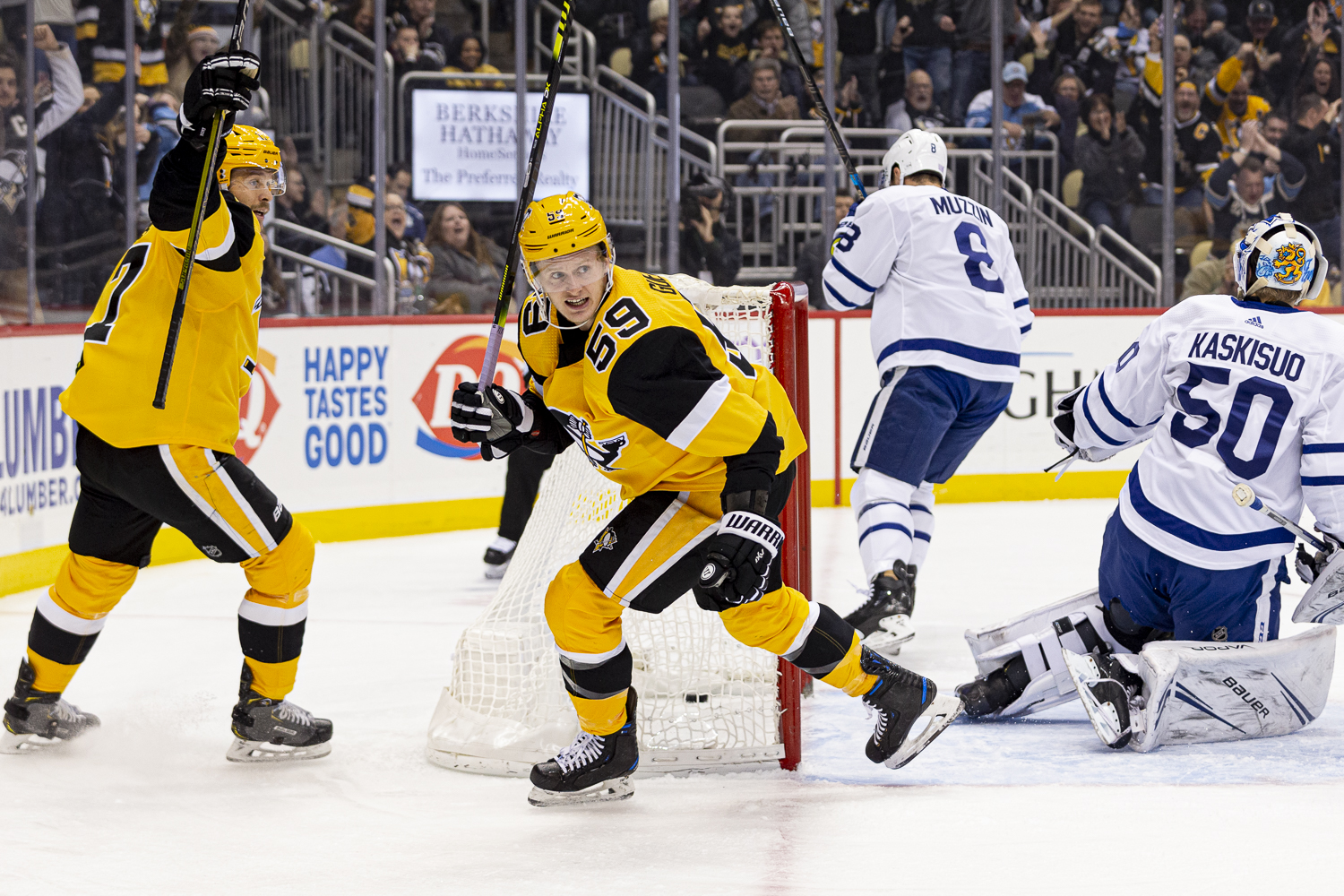 Is this what it looks like when the Penguins put forth a complete, 60-minute effort?

Before the Penguins' 6-1 win over the Maple Leafs on Saturday night at PPG Paints Arena, the Penguins had been getting into the habit of digging themselves into early holes. They hadn't scored first in a game since Oct. 29, allowing their opponents to score first in six consecutive games. In the previous five games, the Penguins had allowed the first two or more goals of the game.

"It's nice to get out on top early, I think that was our thing we wanted to do," Guentzel said. "It hasn't gone our way lately. To get that power play was a huge confidence booster for us."

The power play goal was the Penguins' first at home in the first period of any game this season so far. The Penguins had previously gone 0-for-11 on early man advantages on home ice.

For the first time in nine games, the Penguins got off to a 2-0 lead when Evgeni Malkin scored 2:06 later:

As important as it is for the stars to step up in Sidney Crosby's absence, the forward depth is going to be huge. Dominik Kahun recorded the first multi-goal game of his career, opening the second-period scoring less than a minute in. His second goal of the game was an interesting one. At 4:32 of the middle frame, Kahun put the puck in the net, but the play was immediately waived off for goaltender interference, as Brandon Tanev was tripped into goaltender Kasimir Kaskisuo:

Kaskisuo was clearly interfered with, that wasn't the debate here. However, Rule 38.11 of the NHL's rule book says that if  "the attacking player was pushed, shoved, or fouled by the defending player, causing the attacking player to come into contact with the goalkeeper," the goal should count.

Over two full minutes had passed while Mike Sullivan argued the call with officials, during which Mark Recchi was speaking into his mic and listening into the earpiece nearly the entire time, presumably speaking to video coach Andy Saucier up in the press box. After Recchi's discussion with Saucier, the coaches conferred and challenged the play. It was determined that the Leafs' Jake Muzzin caused Tanev to interfere with Kaskisuo, so the goal counted.

"It was funny," Kahun said of the goal. "(Tanev) made an unbelievable play there, went to the net, he got tripped there and the puck went to me. My job wasn't that hard. We were a little upset when they said no goal, but after that we were pretty happy."

Kahun added a primary assist to his total just under three minutes later when he set up Jared McCann's laser of a shot that extended the lead to 5-0.

Tristan Jarry, who had a strong 32-save performance, had his shutout bid snapped by Jason Spezza late in the second period. Bryan Rust sealed the win with a shorthanded 2-on-1 goal with Teddy Blueger in the third period.

The effort wasn't just complete, it was smart. This season, Sullivan has stressed shot selection. He's said that looking at shot and shot attempt totals alone can't tell a story, and that you have to take into account the quality of the shots.

Even though the Penguins weren't attempting as many shots, they dominated in the quality shots. From the high-danger areas of the ice close to the crease, the Penguins controlled over 70 percent of the attempts, registering 12 to the Leafs' five during the game.

That's why even though the shot attempt numbers showed the game trending in the Leafs' favor ..."

... the "expected goals" metric, which takes into account different variables including the quality of the shot (where it is coming from on the ice, if the shot came off of a rush, or a rebound attempt, etc.) more accurately reflected and predicted the results of the game where they mattered, on the scoresheet:

When it comes to replacing Crosby over these next six weeks or so, this is what it's going to take. A complete, 60-minute effort from all involved. An impressive 10 of the Penguins' 18 skaters recorded at least a point in this one.

"When a guy like (Crosby) doesn't play, everybody needs to be ready," said Kahun. "I think we did for sure. We played good as a team."