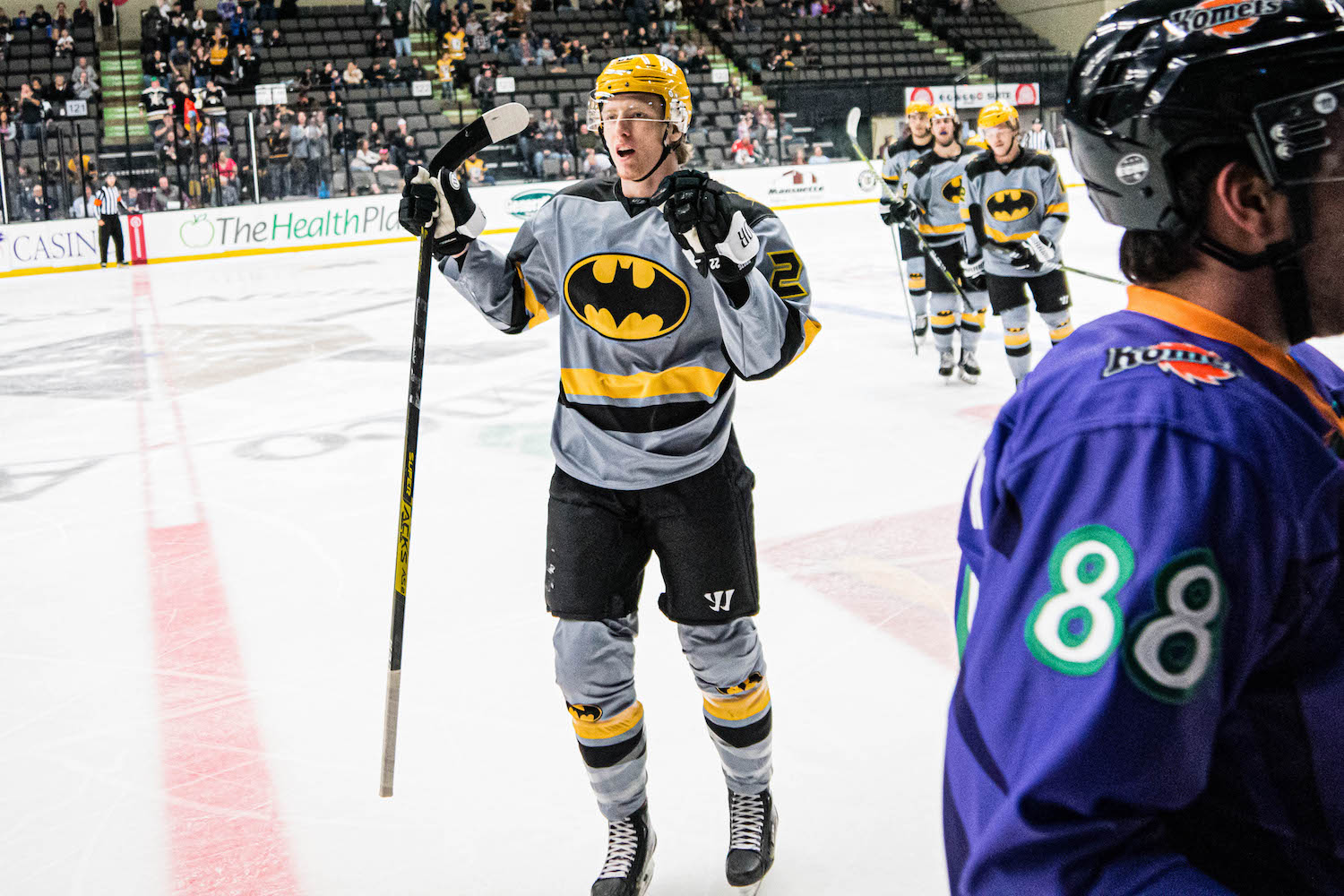 The last time I spoke with Penguins forward prospect Jan Drozg, he wasn't too happy with his play.

It was four games into his first professional season with the Nailers, and he had just one goal in four games. It was a short sample size, but definitely not the point-per-game pace he was used to from his junior career.

“How the season starts, it’s kind of a tough situation right now for me,” he told me at the time. “But I’ll try to pick it up as soon as possible."

It didn't take Drozg very long to pick up the pace. Nine games later, the 20-year-old Slovenian leads the Nailers in goals with eight, and is tied for the team-lead in point with 15.

"I picked up my game, how I said before," Drozg told me on Sunday. "I said I needed to pick up my game as soon as possible, and I did that. I feel comfortable on the ice and I found a good line to play with. I think things are going really well for me right now, it's good."

Drozg's best game of the season was Sunday's 6-5 overtime win, during which he recorded two goals and two assists. He scored the opening goal of the game:

"It was a lot of players in front of the net," Drozg said of that goal. "I got the pass, the goalie fell and I just shot the puck into the empty net. It was an important goal for the team."

He then scored the Nailers' second goal of the game in the second period:

"The second goal was pretty good," he said. "Me and (Renars Krastenbergs) had a 2-on-1, and me and Krasty traded like tic-tac-toe, I scored the goal. So it was a pretty nice goal I think."

"It's pretty great, especially because we also got the win after," Drozg said of his night. "It was an important game for us. We get an important two points, I'm happy to have a good game. ... That's good for confidence. It's always nice to score, it's fun. I hope we can and I can do the same thing next game."

Drozg's linemates as of late have been Brown, a center, and Krastenbergs on the left side. The 6-foot-2, 175-pound Drozg's best asset is his speed, and putting him with two other fast players has made for a pretty fast line.

"Krasty and Brown are my favorite players to play with now," Drozg said. "They have a high hockey IQ and see the play, see the passes. It's fun to play with them."

Brown likes playing with Drozg, too.

"Janny flies," Brown said of Drozg. "He's a young guy with a ton of talent and a ton of upside, it's going to be fun to see him blossom."

Drozg credited his turnaround in part to finding a line that really clicks, but also getting used to the busy ECHL schedule, an especially tough grind considering the ECHL only runs three forward lines.

"That's hard, it's still hard," Drozg said of only playing three lines. "Especially when we play three-in-three games. I think I found the way to play those games, I like to have ice time so it's good."

Drozg's turnaround is sort of interesting because absolutely none of it has come from the power play. Early in the season he wasn't getting regular power play minutes, but now that he is, he still doesn't have a point on the Nailers power play that is currently operating at just 15.9 percent.

"I think I just need to work on my power play," he said. "I didn't score a power play point yet, so that's kind of weird for me. I'm a big power play guy."

Drozg is also pretty used to life off the ice too, now. He previously lived on his own during his two years of junior hockey in Sweden, but he lived with a billet family during his two years in the QMJHL. He's getting used to doing things like cooking for himself again, and doing his own laundry.

"I mean, I think my mom is better at that for sure than me," he laughed. "But I try to do my best at that kind of stuff."

The Penguins have a lot of forward depth through the system this year, which is a big reason why Drozg started the year in Wheeling. When the opportunity presents itself for a call to Wilkes-Barre, Drozg says he's ready. But for now, he's just focusing on helping the Nailers win.

"I think I'm ready for the American League," he said. "But I don't think about it, I just play the next game."

• There were no moves.

The Grizzlies scored two goals less than three minutes apart in the second period to tie the game and take the league. They held the Nailers scoreless in the third to take the win.

• Nov. 16: at Reading, 1-0 overtime loss
After a scoreless 60 minutes, the Royals' overtime goal was the lone goal in the entire game.

Jordan Ruby earned the loss in net with 27 saves on 28 shots.

The Nailers went 0-for-3 on the power play and 2-for-2 on the penalty kill.

• Nov. 17: vs. Fort Wayne, 6-5 overtime win
Drozg opened the scoring with his team-leading seventh goal of the season at 3:52 of the opening period. The Komets answered with three goals in the first period to take a 3-1 lead at the first intermission.

The Komets extended their lead to 4-1, 2:18 into the middle frame. The Nailers cut the Komets' lead to one with goals 1:19 apart from Drozg's eighth of the year and defenseman Minerva's first career goal. The Komets regained the two-goal lead before the end of the second period.

Nailers center Myles Powell cut the Komets' lead to one goal with his fourth goal of the season in the third period. Cam Brown scored his fifth of the season to tie the game and send it to overtime.

Cam Brown kept up his role of hero in overtime, scoring the game-winner and his sixth of the year 1:29 into the extra frame to complete the comeback.

The Nailers went 0-for-3 on the power play and 2-for-2 on the penalty kill.

• The Nailers’ record of 6-5-2 has them sitting in fourth place in the six-team Central Division, five points out of first place.

The Grizzlies turned the puck over behind their net. Drozg recovered the puck and made a no-look backhand pass across the crease to Krastenbergs, who got the finish:

This goal from Minerva was a similar concept to the one from Dominik Kahun against the Maple Leafs. The Komets' goaltender was interfered with (which dislodged the net), but since it was his own teammates fault, it counted after a review:

Powell got the redirect with his foot. No kicking motion here:

Brown had a laser of a shot:

It's not often that you see two Japanese players in the same game:

From friends in Japan to playing against each other in the @ECHL these two go wayyy back @9yushi0 pic.twitter.com/mIbCoaOFCP