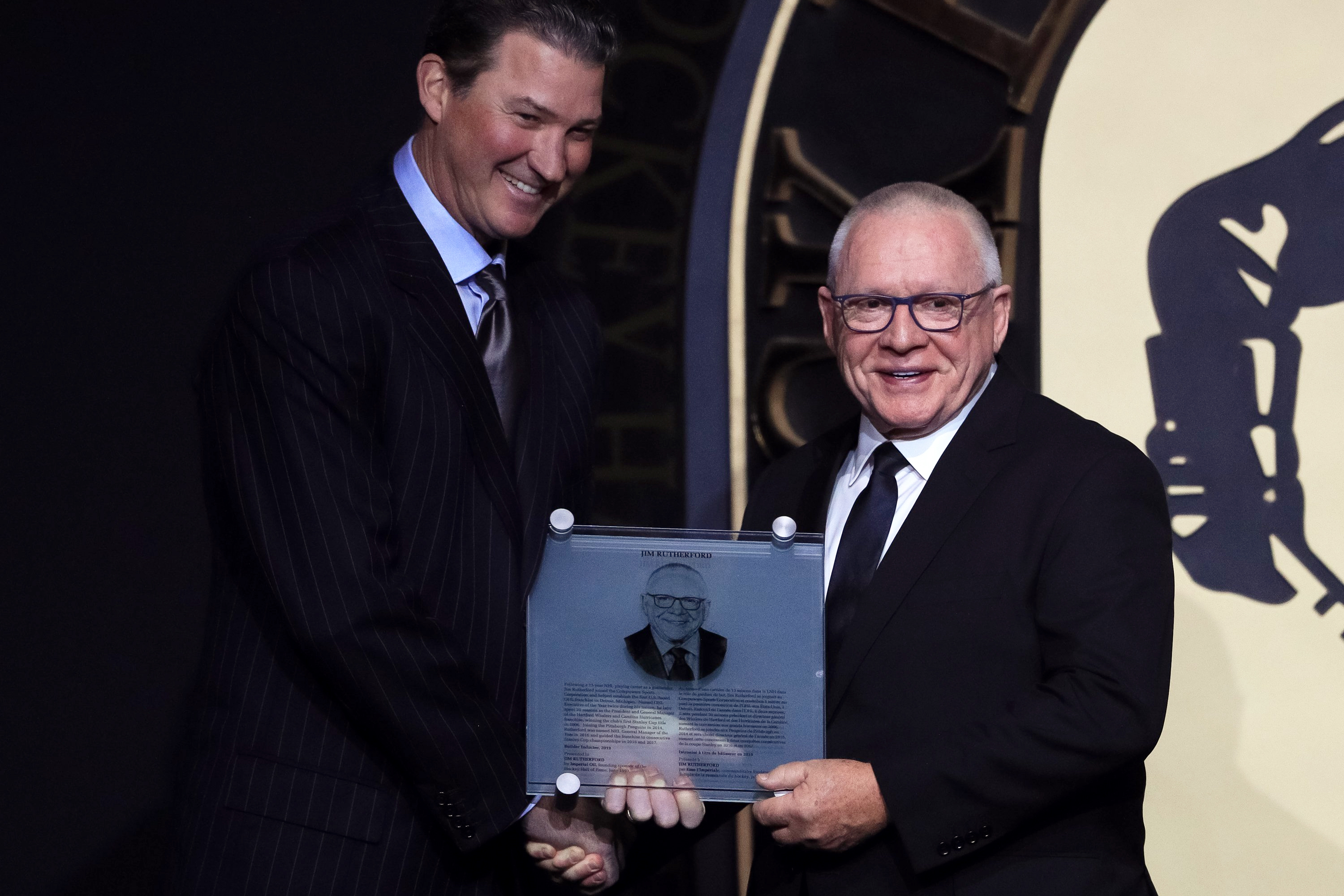 Jim Rutherford is 70 years old, and has been playing hockey, in various ways, for 65 of them.

It is a journey that has taken him to just about every level in the game, and to almost every corner of North America.

But in his Hockey Hall of Fame induction speech in Toronto Monday night, Rutherford made it clear that he cherishes one place -- the one where he stopped pucks during the 1970s, then assembled Stanley Cup-winning rosters decades later -- above all the others.

"My time in Pittsburgh has been the highlight of my career," he said. "I always loved the city when I played there, and I got to return. The owners of the Penguins, Mario Lemieux and Ron Burkle, are amazing, giving us everything we need to be successful. The leadership and the input from Mario, Ron and David (Morehouse, the team president) is invaluable to me.

"But the most special aspect of my career has been the chance to be part of a team with Sidney Crosby. It's really hard to put into words for everyone in Pittsburgh who knows what I'm talking about. It's remarkable to be able to watch Sid, day in and day out. To see his work ethic. To see the impact he has on the team and the city.

"There are so many players who were part of our back-to-back Cup teams, when the Penguins won in '16 and '17, but I want to especially thank Sid, (Evgeni) Malkin, Kris Letang, Matt Murray, Phil Kessel, Patric Hornqvist -- who was my first acquisition when I got there -- and Marc-Andre Fleury."

Rutherford went on to praise Mike Sullivan "for the masterful job he's done," and ran through all of the assistant coaches -- by name -- who have been on the staff during his five-plus years as GM. He also noted that Matt Cullen, now in a player-development role with the Penguins, was the only player to be part of all three Cup-winning teams he oversaw, beginning with Carolina in 2006.

Cullen was part of a large contingent of Penguins officials and staff members who attended the induction ceremony. The group was headlined by Lemieux, who was inducted to the Hall in 1997 and who presented Rutherford with his Hall of Fame plaque.

And he seems to feel the same way about Rutherford as Rutherford does about the Penguins and city.

"Jim is a good friend of mine, good friend of our family and the whole Pittsburgh Penguins organization," Lemieux told NHL Network. "He deserves it. He's had a (heck) of a career starting in juniors, way back, then with the (Hartford) Whalers and Carolina, winning a Cup there. Coming to Pittsburgh, we were lucky enough to hire him a few years ago. He said he was coming to Pittsburgh to have a chance to win another Cup, and he won us two. He's very deserving, and we're all happy for him."

Oh what a night! A warm hearted congratuations to the Class of 2019 🥂#HHOF2019 | #HHOF pic.twitter.com/NbNJLpPdrn

Rutherford wasn't the only member of the Penguins' front office to receive Hall of Fame accolades Monday.

Derek Clancey, the team's director of player personnel, was part of a four-member class named to the ECHL Hall of Fame. Clancey and the others -- Jared Bednar, Dany Bousquet and Glen Metropolit -- will be inducted Jan. 21, in conjunction with the ECHL All-Star Game.

Rutherford devoted the majority of his speech to thanking people who helped him at various stages of his playing and management careers, from a youth coach in his hometown of Beeton, Ontario to former Carolina Hurricanes owner Peter Karmanos, who gave Rutherford his first front-office position with the Compuware program in Michigan.

Although Rutherford was inducted to the Hall as a Builder, he entered that phase of his career only after tending goal in the NHL for parts of 13 seasons. He said his parents made it possible for him to develop as a player -- "My family lived paycheck to paycheck, but they always found a way to get me equipment" -- and noted the importance of the support his wife, Leslie, and children, Andrea and James, have given him during his time as a GM.

"Your family learns very quickly that when you work in hockey, every night's not easy," he said. "Some nights, there are tough losses. There are close calls. There are lots of ups and downs."

Rutherford has had plenty of both since succeeding Ray Shero as GM of the Penguins in 2014, but the legacy that extends back to his days as an undersized goaltender and carries through his time as an architect of Cup-winning teams has secured him a place among the game's immortals in the Hockey Hall of Fame.

"What I've learned the most in my life -- and my advice to people is -- don't let anyone tell you you can't do something," Rutherford said. "Because that was the story of my career. And the more they told me I couldn't do things, the more it turned out that I did."