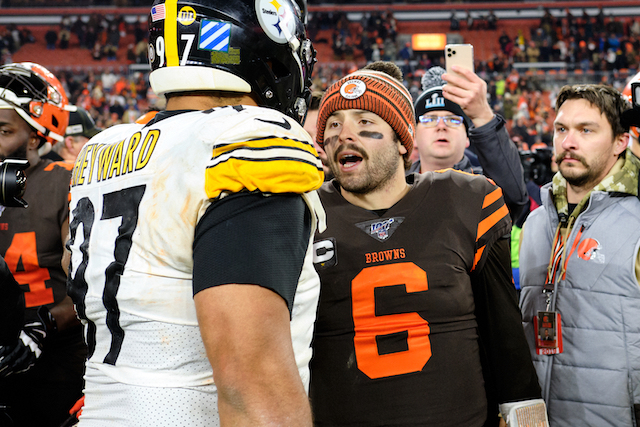 Mike Tomlin didn't want to speak in the aftermath of the events that took place last Thursday night in Cleveland following the Steelers' 21-7 loss to the Browns, refusing to answer questions about it.

Tuesday, he opened his press conference with a statement regarding the fight that took place with eight seconds remaining that included Browns defensive end Myles Garrett bludgeoning Mason Rudolph over the head with the helmet he had ripped off of him seconds earlier.

"It was ugly," said Tomlin. "It was ugly for the game of football. I think all of us that are involved in the game, particularly at this level, want to safeguard and protect the game, its integrity. And in that instance, it was compromised, obviously, with an unfortunate incident. None of us want those incidents to transpire. It did. We were a part of it. We accept responsibility for our actions within it."

Garrett was suspended indefinitely for his actions, while Steelers center Maurkice Pouncey received a three-game ban for punching and kicking the Browns defender in retaliation and Cleveland defensive end Larry Ogunjobi got a one-game suspension for running in and shoving Rudolph to the ground from behind.

Appeals for all three are being heard by the NFL this week, while fines are expected to be forthcoming later this week for other players involved. The Steelers and Browns were both fined $250,000 as organizations.

Tomlin was asked if there was a teachable moment for him or other coaches to come out of the event, which drew national attention.

"I don't know. You've got to ask those guys," Tomlin said.

He then added. "I don't know that we did anything to make it happen in the first place. That's why I said we didn't have anything to learn from it."

The Steelers and Browns meet for a second time this season, Dec. 1 at Heinz Field.