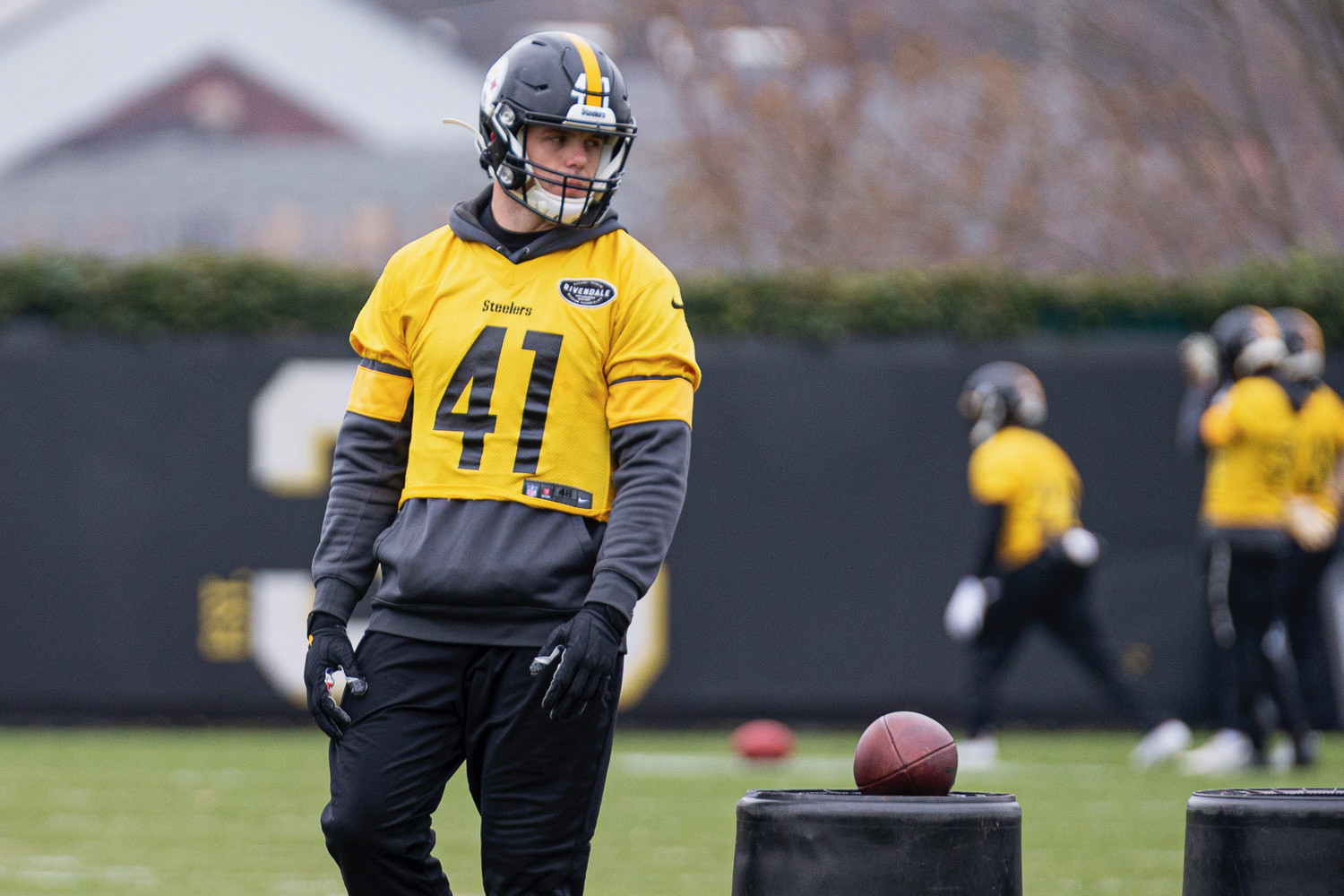 "So what's this for, like a podcast or something?"

Robert Spillane doesn't do much media. Camera crews don't envelop his personal space the way they will with Mason Rudolph, James Conner, Cam Heyward or JuJu Smith-Schuster. Instead, Spillane's usually tucked away in his far, back-left corner of the Steelers locker room at the Rooney Complex, invisible to the camera-strapped hummingbirds flittering about in search of that day's nectar.

But one day before our chat on this day in the South Side, the 23-year-old Spillane was tough to miss. He got dressed after his post-practice shower, went to his locker and ... pulled out a basketball? Wait, and he's wearing a Derrick Rose jersey? Oh, and now he's crossing up his roommate, practice squad defensive end Henry Mondeaux, with a laugh.

We all see you now, Mr. Spillane.

"My thing with basketball is, first, I love basketball, and I always have growing up," Spillane, who attended Fenwick High School just outside Chicago, was telling me when I followed up with him the next day. "My dad would always tell me, you know, cross-training is your best training. When you're younger, you don't necessarily have a sport picked out, so I grew up playing baseball, basketball and football."

Within that, basketball isn't just some recreational hobby for Spillane. He sees real value in taking the hardwood for his professional football career.

"Just think about it: If I can dribble past somebody with the ball, it's going to help me on kickoffs, running down; if I have a blocker, I can use similar movements," Spillane said. "Being able to use your body, spin, make somebody miss. I find so many crossovers [between basketball and football]. Being able to keep your heart rate up — because in basketball, you're running back and forth, your legs are tired and you still gotta be able to juke and move and spin. The more I'm able to understand those movements, the more I've been able to open my eyes to the possibilities of movements in football ...

"To this day, I love playing basketball, whether it's dribbling the ball in the house — which, uhh, kinda annoys my roommate Henry here — or whatever else."

Sitting directly behind Spillane, Mondeaux looked up from his phone, glanced over his shoulder, widened his eyes and gave a single nod.

But while Spillane's dribbling in the house might not be too well received, his antics in the locker room certainly were, drawing cheers and some And-1-mixtape-quality commentary from his teammates. For Spillane, it was all well deserved. The basketball brought him out of his shell a bit and briefly turned the spotlight in his direction, a fitting display after getting promoted to the team's active, 53-man roster earlier this month.

Spillane's grind through training camp and on the practice squad paid off, and his opportunity arrived.

"Going from the practice squad to playing special teams and defense, you never know what goes on, so I'm very excited for the opportunity," Spillane said. "These coaches put their trust in me, my teammates put their trust in me and I don't want to just be a player, I want to make a play, something that stands out."

That isn't easy. Sure, players want to make plays, they want to get on the field and they want to help their team win football games. But for so many at this level, that journey is cut short after training camp and OTAs or they're designated to a life on and off the practice squad. Spillane, meanwhile, climbed that ladder this season, seizing his opportunity on the team's active, 53-man roster when the Steelers placed rookie Ulysees Gilbert on injured reserve with a back injury.

"You always have to see that vision in sight with the end in mind," Spillane was telling me. "At the end of the day, I knew I didn't want to be a practice squad player my whole career. At the end of the career, I want to look back and say all the trials and tribulations have taught me and helped lead me to where I'm at today. So I just add to the chip on my shoulder. Because I never doubted myself or my ability or skills, but I understand that where I'm at and the situation I'm in, I need to do a lot of things right and be a consistent person and player day in, day out."

Spillane took the first step in that journey for the team's Week 10 win against the Rams at Heinz Field. That Sunday, Spillane walked into the locker room and was greeted by a black-and-gold jersey boasting "41" and "Spillane." The moment was special — not just because he's living his dream with the Steelers, but because his late grandfather, Johnny Lattner, wore No. 41 for the team in 1954. Lattner, the Steelers' only Heisman Trophy winner, was drafted in the first round out of Notre Dame and appeared in 12 games, registering 1,028 all-purpose yards and seven touchdowns.

His career was cut short, however. Lattner, a member of Notre Dame's ROTC, was required to serve a two-year stint with the Air Force, where he injured his knee playing football on base. His NFL career never resumed — until now, in some ways, as Spillane carries on the family legacy.

"It was really special, just walking into the locker room, seeing 'Spillane, 41,'" he was telling me. "I could kind of picture my grandfather walking into his locker, seeing 'Lattner, 41' with the Steelers; when was that, 1954? So, a long, long time ago. [But] just his presence and knowing that he's looking down proud of me, proud of my family, proud of how far I've come ... I'm really happy."

From Spillane getting cut from the Steelers practice squad in late September to make room for tight end Alize Mack to now suiting up on Sundays, Lattner certainly would have plenty to smile about as he watches this chapter of his grandson's career play out in the Steel City. And while Spillane's motivation is plenty internal, he attributes his steady rise to his teammates and coaches here, as well.

"I feel like there's a very strong bond in this locker room, and that's been building even before I got here," Spillane said. "When I first got here, I was welcomed into that bond."

It took no time to feel that, either.

"[I felt it] pretty much right away," he continued. "When I got here, the guys really brought me in, and I wasn't really expecting that. I wasn't sure what this locker room would be like compared to last year. But they're very welcoming guys that are willing to step out and teach me the defense before I got to OTAs so I would have some knowledge going in.

"The guys are there for me, so I can't thank them enough."

It's my turn for thanks now, though, and I shake Spillane's hand with an appreciative nod ... then comes that nervous energy around a recorder again.

"Hey, man, just make me sound good," Spillane said with a laugh and a slap on the shoulder. "I know I mumble and stuff sometimes."

No need for making you sound good, man. The journey speaks for itself.