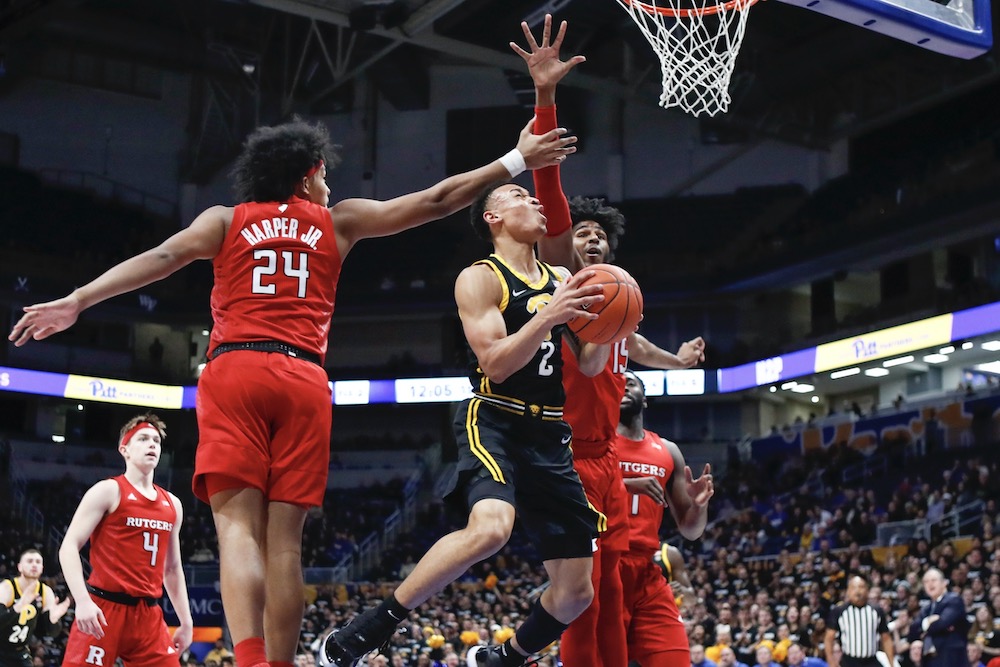 Do those two things, and this Pitt Panthers team will win basketball games in 2019-20, as they did on this frigid, snowy evening at the Petersen Events Center, toppling Rutgers, 71-60 in the ACC/Big Ten Challenge, to improve to 7-2 on the year.

Xavier Johnson led the way, registering 20 points on 8-for-14 shooting in 38 minutes of play. His highlight reel from this one is rather sweet:

Trey McGowens tallied 16 points of his own alongside four steals. Ryan Murphy added 15 points — 11 in the first half. Eric Hamilton posted eight boards and three blocks while drawing two offensive fouls. Au'diese Toney chipped in a cool 10 points, three assists and two steals off the bench.

This Panthers squad was dialed in from top to bottom to face the now-6-2 Rutgers Scarlet Knights on Tuesday, and Jeff Capel fully noted the achievement in his post-game press conference. His team was fresh off a championship victory in the Fort Myers Tip-Off Tournament, and a 9 p.m. matchup on a Tuesday night against out-of-conference Rutgers could've represented a letdown. Remember, this team toppled Florida State to open the season, only to fall to Nicholls State in its follow-up appearance at home.

So after that tournament win, the Panthers were primed to regress, to disappoint — only they didn't. At all.

"I'm proud of my team," Capel said at the podium after the win.

Johnson was a little more direct with the parallel, pointing right back to the Florida State win as a learning experience for this team.

"The team has matured from after that game," Johnson was saying. "We learned that [after] a big game, you have to take every team the same. You gotta give every team the respect."

This was inexcusable. Not only was Pitt on its way to blowing a lead at home but ...

"At halftime, he [Coach Capel] told us that they're a good team in the second half," Johnson said when I asked him what Capel shared during that timeout. "From our mentality, we didn't come out with the right mindset, and on that timeout, he yelled at us, told us 'you gotta get it together' and the team got it together and we started playing our defense and playing together again."

Solid but vague, right? I followed up with Capel:

"Well, we talked about that, in watching them, in scouting them, they've been really good in the second half," Capel began. "It's actually, I knew it, but I was going through some of my notes before the game and that was the last thing I saw before I left. I started studying the box scores again, and I saw that, so I was able to mention that at halftime."

"I didn't like the way we started the second half," he began. "I didn't think we had pop. I didn't think we had energy. I saw it when we were warming up. And the very first play, we actually get a stop and we come down and we execute, and we blow a layup. And right away, I knew, and so, during that timeout, we just talked about getting back to getting stops. Rebounding the basketball. Being smart on offense. Finishing plays."

Sensing the theme with these terms? Pitt isn't striving for some fancy, intricate form of basketball. They're looking to maximize the current talent on their roster and to deploy everyone as a unit that is, above all, tough to play against. That happens when it's five playing as one. This team doesn't have to win games as much as they need to force the opponent to lose. It's an interesting distinction, but it's one that's become obvious in tracking this team through nine games this year.

All that said, Capel wasn't quite done with my question yet. And here, it got juicy:

"I mean, that's one of the reasons I got upset with X [Johnson] early in the game and we took him out, because, you know, he's going in and he's not going strong," Capel said. "And then he comes back and he goes and he dunks it. That's who he is. That's who he has to be. And he's not going to be this guy that's some finesse guy. He needs to be a little pitbull, and I think he did a better job of that. And I thought in the second half after that timeout, we were able to regroup from their run and then we were able to make our run and get control back of the game."

Capel may have singled out Johnson, the team's leading scorer on this night, but this was the most complete, team effort of the year. You could see it in the ball movement, which led to a 47 percent (27 for 58) shooting performance.

"We're passing it and moving it," Johnson said. "The ball's not just stagnant in me and Murph or Trey's hands."

You could see it in the squad's ability to create turnovers — and then capitalize on them — registering 28 points off 20 Rutgers turnovers in all.

And, of course, you could see it in this: 71-60, Pitt, a final score that gave them half of the 14 wins they achieved all last season just nine games into the year.

"I think we've had a challenging schedule for us, for where we are at our program," Capel was saying. "I think this is, what, the fifth game against a Power Five conference out of [nine] games? So fifth out of nine ... It's forced us to grow up. We've had to learn, and we've had to learn [while] going through the gauntlet a little bit for where we are as a program. I'm proud of how we've recovered."

That recovery started with defense and togetherness. The rest is slowly falling into place.