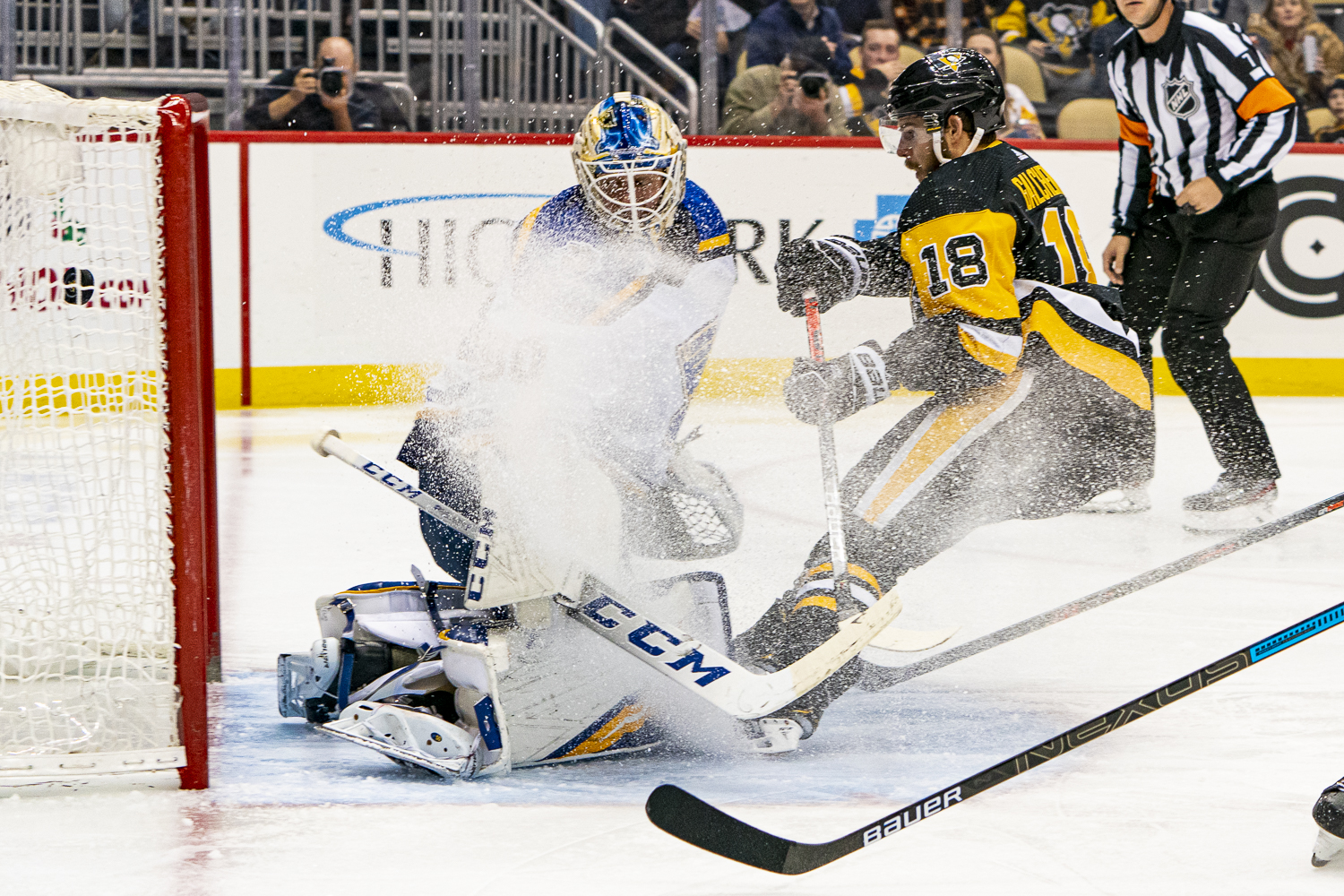 The Penguins will have bigger margins of victory this season.

They'll have more breathtaking individual performances by some of the world-class talents sprinkled around their roster, too.

But they might never have a more impressive team win than the one they earned against the Blues, 3-0, at PPG Paints Arena Wednesday night.

St. Louis, after all, is the defending Stanley Cup champion, and a legitimate threat to make a run at another title next spring. And the Penguins, well, they were the Penguins all right, but you only knew that for certain because of the crest on their sweaters.

Certainly, a casual follower couldn't have been sure just from reading a lot of the nameplates. What's a Noesen? Blandisi? Riikola?

The answer: All were cogs in a surprisingly efficient and effective machine, just as some of their better-known teammates -- guys like Evgeni Malkin, Jake Guentzel and Kris Letang -- were.

And while the Penguins didn't play a flawless game -- those don't happen in the NHL -- they did find just the right blend of discipline and desperation to shut out one of the league's most formidable teams on a night when their lineup was even more diluted than usual.

"We played really well," Letang said. "Within the structure. A couple of times in the game, they had good (possession) times in our zone, but we stuck to the plan."

That plan -- or, at least, the group of guys charged with executing it -- had to be tweaked when Jack Johnson, who had been penciled in to replace Brian Dumoulin as Letang's defense partner, was unable to play because of flu-like symptoms.

That got Johnson a spot alongside Sidney Crosby, Bryan Rust, Patric Hornqvist, Justin Schultz, Nick Bjugstad, and, of course, Dumoulin on the list of players who were unavailable to Mike Sullivan because of injury or illness.

Too bad the NHL couldn't have flexed this game from NBC Sports Network to The Infirmary Channel.

Johnson's absence had a ripple effect on the Penguins' defense pairings. John Marino got moved up to the No. 1 pairing, where Letang was bumped to the left side. Chad Ruhwedel went from the third pairing to Marino's old spot alongside Marcus Pettersson, and Zach Trotman went from street clothes to the No. 3 pairing with Juuso Riikola, who had dressed for just one of the previous six games himself.

Not a very imposing group on paper, but a pretty capable one on the ice on this night.

It helped that they were playing in front of Tristan Jarry, whose positioning and rebound control were stellar throughout the night and who sometimes seemed so quick that his shadow had a hard time keeping up.

Jarry earned his third NHL shutout by making 28 saves, several of which prevented St. Louis from radically altering the course of the game.

"He made some big saves at key times," Sullivan said.

Eight of those stops came during Blues power plays, as the Penguins held them without a goal in four tries.

That might not seem like a major feat, but St. Louis entered the game with the third-ranked road power play in the league, with a success rate of 27.9 percent, and the Penguins had leaked in at least one goal while shorthanded in each of the previous six games.

"(Jarry) was huge," said Teddy Blueger, one of the Penguins' primary penalty-killing forwards. "Other than that, I just feel like our details were better. We kept them, for the most part, to the perimeter. Most of the shots were coming from the outside."

Jarry got what proved to be the only goal he would need 39 seconds into the game, when Blueger deflected a Pettersson shot out of the air and past Blues goalie Jordan Binnington for his third of the season:

Stefan Noesen, making an impact in his Penguins debut, added a badly needed insurance goal at 19:20 of the second period and Alex Galchenyuk -- yes, Alex Galchenyuk -- closed out the scoring by taking a lead pass from Sam Lafferty before beating Binnington on a breakaway at 4:59 of the third:

"(Lafferty) made a great play," Galchenyuk said. "I'm happy he saw me."

Galchenyuk's goal expanded the Penguins' comfort zone and doubled his total for the season.

The Penguins still expect big things from Galchenyuk, even though they've rarely gotten them this season. But on this night, they got all they could have asked for -- and possibly more -- from just about everyone healthy enough to pull on a uniform.

The Penguins actually have done that a lot this season, which is why their points total in early April might end up as high as their man-games lost total (107) is today.

"I think everybody's buying into the team concept," Sullivan said. "And when we do that, I think we can win on any given night, regardless of who's in our lineup."