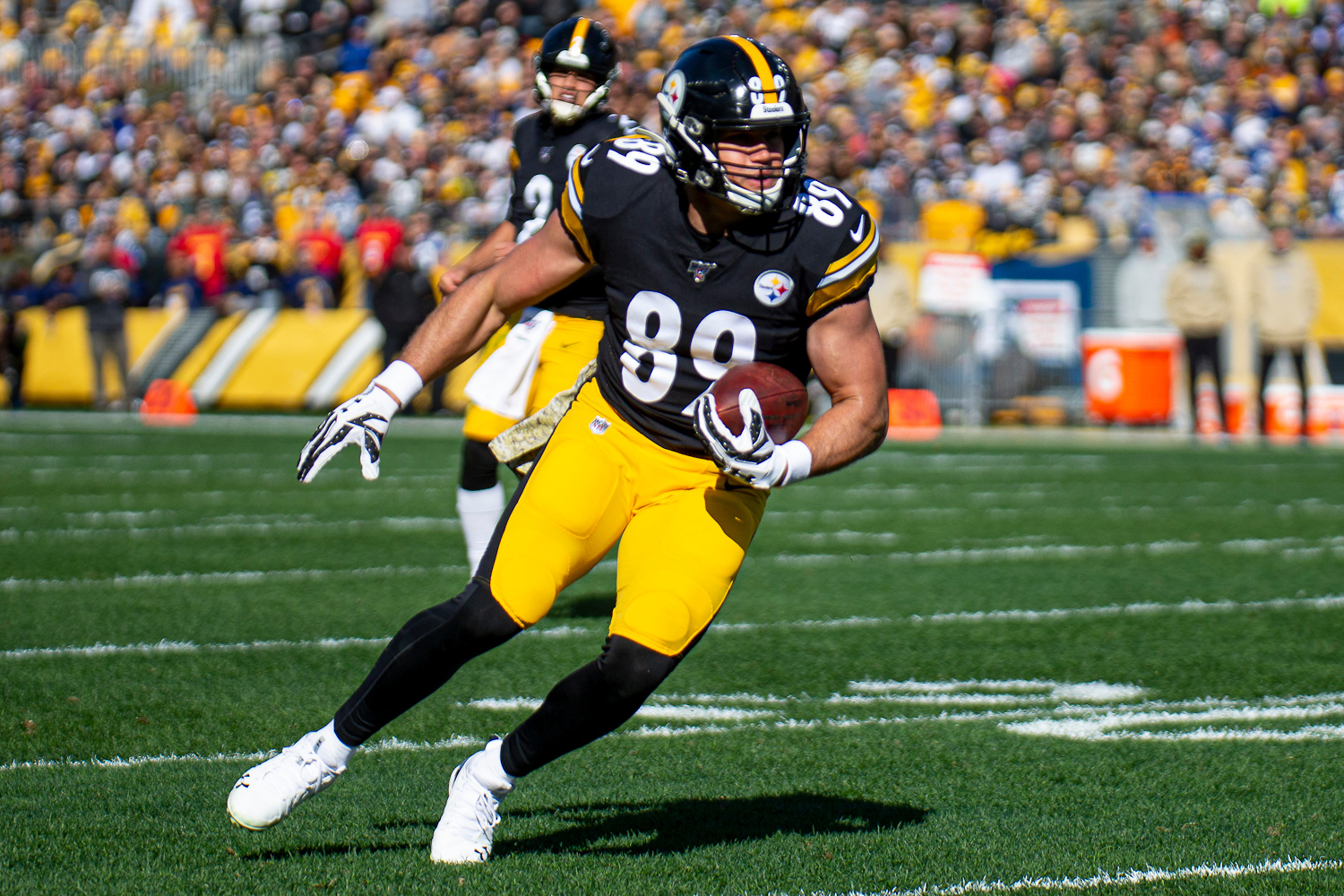 The tight end position was one used extensively by the Steelers as pass catchers last season, as Vance McDonald and backup Jesse James combined for 80 receptions for just over 1,000 yards and six touchdowns.

That usage led many to feel that with the Steelers losing Antonio Brown and James in the offseason, McDonald might find himself with an increased role in the team's passing game this season.

After all, the seventh-year tight end had a breakout season in 2018, setting career highs with 50 receptions for 610 yards and four scores.

But 12 games into the 2019 season, that hasn't come to fruition. McDonald and backup Nick Vannett, acquired from the Seahawks via trade after Week 2, have not only not been big parts of the passing game, they've often been nonexistent in it.

Not having starting quarterback Ben Roethlisberger available for all but six quarters hasn't helped, but in many cases a pass to the tight end is considered an easy and safe pass for young quarterbacks. And despite the Steelers starting both Mason Rudolph and now rookie Devlin Hodges, the tight end position has remained almost strictly a blocking option for the Steelers this season.

At least, perhaps, until this week.

The Cardinals, whom the Steelers face in Arizona Sunday, have been a cure-all for opposing tight ends all season.

Don't have a top-notch tight end? When you play the Cardinals (3-8-1), it hasn't mattered. Starting tight end injured? That's OK, because the backups play like All-Pros in the passing game against Arizona all season.

At least that's the hope for McDonald, Vannett and the Steelers (7-5) this week.

"It’s insane," Vannett told me of the Cardinals' inability to cover tight ends this season. "The week I got traded here, Seattle was going to play Arizona that week, so I had already started studying them. (Will) Dissly went off against them. I remember the Lions, (T.J.) Hockenson, the Lions tight ends did really well."

Hockenson, a rookie, had six receptions for 131 yards and a touchdown against the Cardinals in Week 1. Dissly had seven catches for 57 yards and a score in Week 4. In between and since, other tight ends have had their way with the Cardinals.

The Eagles' Zach Ertz leads all NFL tight ends with 70 receptions, while the Chiefs' Travis Kelce leads them in receiving yards with 923. Houston's Darren Fells leads the position with seven touchdown catches. All are numbers far eclipsed cumulatively by whomever is playing tight end against the Cardinals that week.

"Hopefully, this game can be a big step forward for me and Vance this week. We’re going to execute the game plan the coaches put in place for us this week. They’ve got some holes where they don’t cover the tight end. Hopefully we can expose those. I think we’re looking for a big game."

That would be a welcome addition to the Steelers' passing game, in which the position has largely been MIA this season.

McDonald has 32 receptions for 242 yards and three touchdowns a year after leading all NFL tight ends in yards after the catch in 2018. Vannett has seven catches for 70 yards.

Offensive coordinator Randy Fichtner has been consistently asked all season about his team's lack of ability to get the ball to those two.

"The road’s kind of winded a little left and right, and left, and then right, and up, and down. So, we’re collectively trying to get all of them to be involved," Fichtner said recently.

Hodges might turn that around this week. In last Sunday's 20-13 win over the Browns, McDonald and Vannett combined for four catches for 28 yards, catching all four of their targets.

Considering the opponent this week, and the Cardinals' inability to cover the position, those targets could double or triple this week.

"There’s a trend," Vannett said. "Hopefully we can keep that trend going this week."

Share
Tweet
Email
Kovacevic: To rebuild or not? Eh, why not try both?
Carter’s Classroom: Strong coverage chemistry ☕