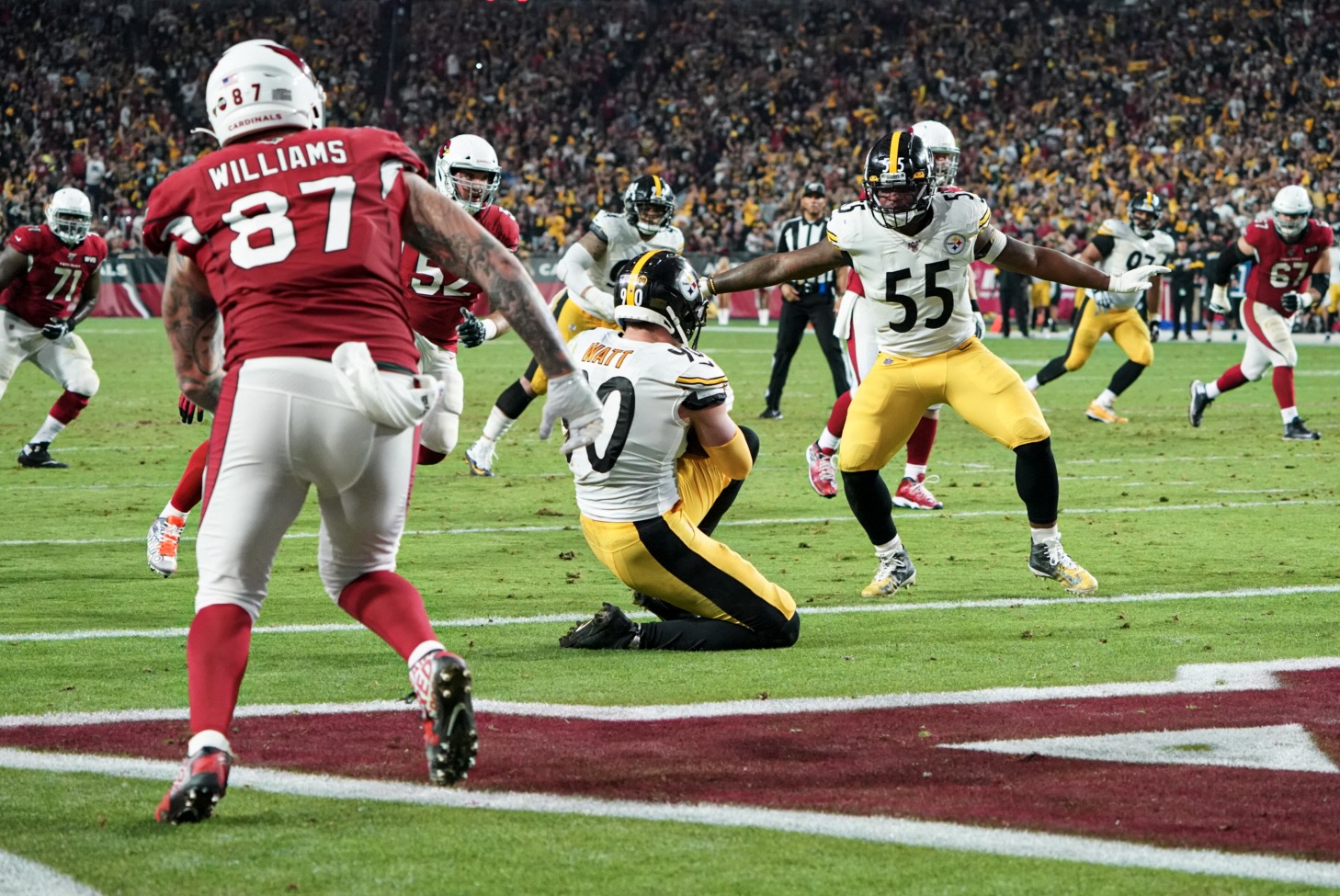 GLENDALE, Ariz. -- It's fun to talk and write about what Devlin ‘Duck’ Hodges is doing. He's been a great story, to be sure.

But let's face the facts, the Steelers are winning because of this defense.

Don't misunderstand. Hodges is making plays. The offense is running the ball better, averaging 141 yards per game the past three weeks. But it's all about this defense. It's good. It's nasty. And after watching what happened to the 49ers Sunday in New Orleans and the Patriots at home against Kansas City, it might be the best defense in the NFL.

Sure, the Steelers might not be No. 1 in total defense or even scoring defense. But after dispatching the Cardinals here Sunday, 23-17, it is No. 1 in turnovers forced with 33. It's No. 1 in sacks with 48.

And those stats make all the difference in the world.

After holding the Cardinals to 236 total yards in this game, sacking Kyler Murray five times and intercepting him three times, the Steelers showed their defense can, indeed, travel well.

It all comes down to guys being in the right places at the right time. That's up front on the line. That's at the second level. And that's in the secondary.

Cam Heyward leads the way up front. He makes sure the front seven guys are where they need to be. On the back end, it's Joe Haden who handles that.

"I think it’s just preparation. Guys study," Heyward said. "It’s not odd that Joe is in the right place. I see him prepare throughout the week. Thursday, he conducts the meetings after practice. He’s passionate about it. He doesn’t let anyone slack off. He takes it very seriously. I can recall this week, everybody was cutting up and they brought food into the meeting and he was like, ‘Dude, we’ve got to focus.’ You see him lead through this week. He sets the example and those guys follow."

There's a lot of that on this team.

This team has its fun. But it's also laser-focused on the task at hand each week. And it starts with this defense.

"Ever since I got into the league, I’ve taken the game very seriously," Haden said after recording two interceptions against the Cardinals. "My thing — these guys, they respect me. I try to do what I can do on the field just watching tape and showing them things, being able to know what the coach is trying to get us to put on tape. We’re in meetings communicating. I think that’s the biggest thing, everybody knowing exactly what we’re doing, what we’re looking for. I just appreciate them coming in there with the same seriousness that I do."

That's the same thing we have heard all season regarding new additions such as corner Steven Nelson, safety Minkah Fitzpatrick and linebackers Mark Barron and Devin Bush, as well. They're very professional in their approach.

They're serious about their craft each and every week. It shows in their play.

A lot of the focus recently has been on Hodges. And rightfully so. But the Steelers go as far as their defense will take them.

• Last year, there were a good number of people who wanted the Steelers to trade for Cardinals cornerback Patrick Peterson and his $11-million per year salary.

That trade -- if the Cardinals had even considered it, which they wouldn't -- would have cost the Steelers a first-round draft pick.

That first-round pick was turned into Bush. And the Steelers instead spent their cornerback money on Nelson.

It says here the Steelers made the right decision.

The only time you noticed Peterson on the field Sunday was when he was doing things such as giving up a 22-yard catch to Deon Cain.

The Steelers made the right decision in not pursuing Peterson, who has had a below average season -- especially for a "big name" corner.

• The Steelers' decision -- and Mike Tomlin fell on his sword on this one -- to run a fake punt up 10 points from their own 40 was questionable, to be sure.

But it also was a play that was called off from the sideline, if players following the game are to be believed. Everyone knew it was called off, except for Jordan Berry, the guy who would be executing the fake and running with the ball.

Those kind of plays are great when they work. The Cardinals pulled one off earlier in the game on a snap to one of the up backs.

But when they don't work, they can be extremely detrimental to winning.

• All of that said, the Steelers obviously got a winning performance from their special teams once again. It's nice to actually get a big play out of the return game, especially with the offense in the state it's in.

The Steelers had Diontae Johnson as the top-rated wide receiver in this year's draft class. We had seen flashes of that kind of game-breaking play at various points this season.

The Steelers weren't the only ones who had an eye on Johnson in the draft.

"We really liked him coming out," said Cardinals coach Kliff Kingsbury. "Quick-twitch, great route runner, and (he) really made a bunch of plays."

Johnson looked like a young Antonio Brown in this game.

With one big return, Johnson now leads all punt returners -- who have at least one return per game played this season -- with an average of 12.7 yards. And he's one of just four players this season to return a punt for a touchdown.

The Steelers haven't had a player lead the league in punt return average since Johnny Sample in 1961.

You can tell he's starting to get comfortable with what's being asked of him.

"The confidence and comfort level just comes with playing a lot and practicing," Hodges said. "The more you practice, the more you play, the more comfortable you get."

The Cardinals defense entered this game last in the league in passing yards allowed. But the Cardinals do have a decent pass rush.

That's a big-time play from Hodges and Johnson.

Last week, he showed great chemistry with James Washington in a win over the Browns. This week, it was with Johnson.

• This running game the Steelers has cobbled together the past three games -- 141 yards per game -- will play well in the postseason, assuming the Steelers make it.

That average would be fourth in the league if the Steelers had averaged that all season.

Of the teams in the AFC who are currently in the playoffs, only the Patriots and Ravens have top-10 run defenses. And that's largely because teams haven't stuck with the run against those teams. The Ravens allow 4.5 yards per carry and the Patriots 4.2.

Of the other teams currently in the AFC playoffs, the Chiefs are 28th against the run, the Texans are 18th and the Bills, who the Steelers will see next Sunday night, are 14th.

In other words, they all can be run on -- if you stick with it.

The Steelers are much more intent on sticking with their running game now. In their past three games, they've run the ball an average of 35 times per game. In their first 10 games, they averaged 22.8 runs per game.

• As things currently stand, the Steelers would play the Chiefs in the first round of the playoffs.

But that could change next week. With a win over the Bills next Sunday night, the Steelers would move into the No. 5 spot.

If the Steelers win, they move to the No. 5 seed and Buffalo falls to No. 6. And if the Titans win at home against the Texans, they move into the AFC South lead as the No. 4 seed, with the Texans dropping out of the playoffs all together.

In that scenario, even if the Texans win in Week 16 (at Tampa Bay) and the Titans lose at home against the Saints, the Titans remain in the AFC South lead. And those two teams meet in Week 17 in Houston.

As the No. 5 seed, the Steelers would play the winner of the AFC South since the Ravens, Patriots and Chiefs all seem destined to win their respective divisions. The only change to that would be if the Steelers lose to the Bills and the Bills then beat the Patriots in Week 16.

That would put the Bills in line to win the AFC East. Then, the Steelers would need to win their final two games -- at the Jets and Ravens -- to beat out the team that loses the AFC South for the sixth seed.

And with the Ravens winning and Patriots losing Sunday, the Ravens might not need that Week 17 game and could rest some people.

• The Steelers used all four of their active running backs on their opening possession against the Cardinals, as Jaylen Samuels, Benny Snell, Kerrith Whyte and Trey Edmunds all got touches.

Edmunds will be the odd man out when James Conner returns -- perhaps this week.

But the other three all have given the Steelers something different.

Snell is now 4 for 5 in third-and-short rushing situations after getting a conversion in this game. Samuels remains the team's best pass catcher out of the backfield. And Whyte is averaging 6.7 yards per carry.

• The Steelers had nine tackles for a loss in this game, including a team-high three from Bud Dupree.

Fitzpatrick and fellow safety Terrell Edmunds both had stops behind the line of scrimmage against Kyler Murray on quarterback option plays.

In fact, the Steelers limited Murray, the Cardinals' leading rusher entering this game, to a season-low 2 yards on 6 carries.

"We mixed it up whether it was blitzing, we dropped eight and rushed three," Heyward told me. "We had a spy at times. We mixed it up. We didn’t just let it be a four-man rush all the time. Then that last series, we put the four-man rush in there and got after it."

T.J. Watt had a streak of nine consecutive games with at least half a sack, the longest in the NFL and one short of the team record coming into this game.

But there were times when Watt simply spied Murray, not rushing the quarterback and staying back at the line of scrimmage to wait and see if Murray tried to escape. Other times, he and Dupree dropped into coverage.

Of course, none of that stuff will be taken into consideration when the NFL Defensive Player of the Year award votes are tabulated.

It can almost be guaranteed the players with whom Watt is competing for that award rush the passer 100 percent of the time.

Of course, even though he didn't have a sack in this game, Watt didn't hurt his chances by recording his second interception of the season. And he now has 10 forced turnovers, which leads the league.

"He's the Defensive Player of the Year," Dupree said matter of factly.

Watt should be. Whether or not he actually wins the award remains to be seen.

• Watching Larry Fitzgerald play is always a treat. He's not the player he once was, but you see Fitzgerald always tapping guys on the helmet or giving them some other kind of props after they make a play -- against him.

He is, as he always has been, a class act. It's a shame he's played his entire career for a team that performs in relative obscurity.

It's no wonder both former Steelers offensive coordinator Todd Haley and wide receivers coach Darryl Drake, who both coached him with the Cardinals, always brought up Fitzgerald to the team's receivers when they were talking about how to carry yourself, both on and off the field.