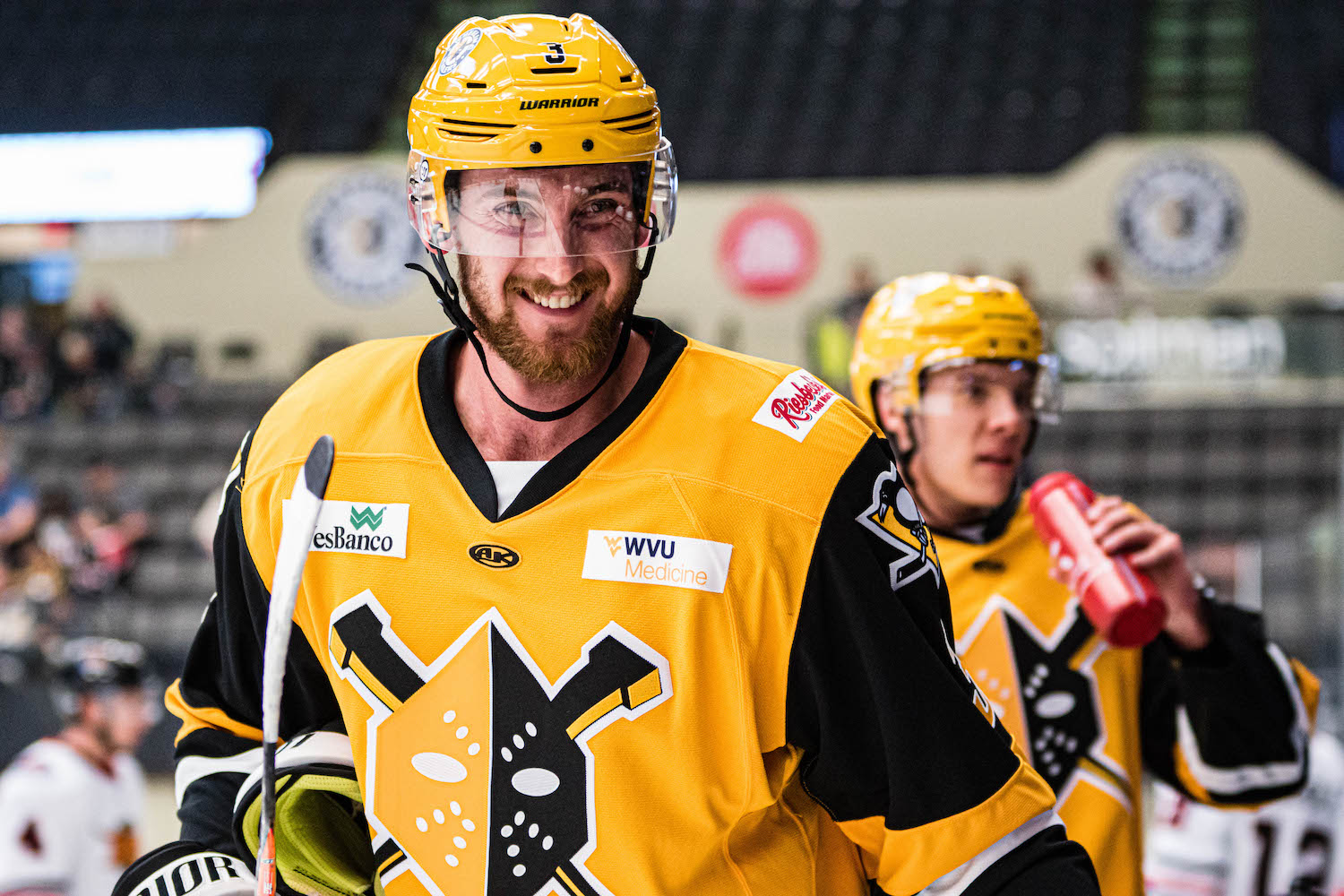 Defenseman Aaron Titcomb is taking on an increased role with the Nailers in his second professional season.

"I think I ended the season on a high with coach (Mike) Bavis, he said he really wanted me back," Titcomb told me of returning to the Nailers this season. "So we made it work and I'm very lucky to be back here, I'm very fortunate. I love the community, I love the guys here, the coaching staff, it's been good all around, I'm excited."

When the Nailers re-signed Titcomb this summer, Bavis described the 6-foot-4, 215-pound defenseman as a "big, strong, versatile defenseman who added a lot of composure to his game last season," and added that he was looking  forward to seeing Titcomb growing his offensive game this season.

Titcomb, 26, has been playing on the Nailers' top defense pairing this season, and has already surpassed last season's point totals of one goal and three assists in 44 games with his five assists in 16 games. He credits his increased offensive game to the confidence that comes with being a second-year pro.

"I think I've added a lot more offensive side to my game, being poised with the puck, not really panicking out there," he said. "This comes with the territory, I've played over 50 games now pro so you just kind of get used to it. You're meant to be here, it's not by luck, so you just have to keep doing what you're doing."

Titcomb is also seeing an increased leadership role this season, something coaches discussed with him prior to the season. Last month, an "A" was added to the front of his jersey as he was named an alternate captain.

One of Titcomb's personal goals this season is to make his AHL debut. He's on an ECHL contract, but he's free to sign an AHL deal -- be it with Wilkes-Barre/Scranton or another organization -- during the season. Players in his position will commonly sign AHL tryout contracts, which allow a player to play up to 25 AHL games before they'd need to be signed to a second tryout contract or a full AHL deal for the season.

If Wilkes-Barre were to need to recall a defenseman right now, Blake Siebenaler would likely be first in line given his prior AHL experience. Titcomb wouldn't be far behind, though. He was one of two Nailers on ECHL contracts invited to Wilkes-Barre's training camp this season, with the other being defenseman and Wilkes-Barre native Craig Skudalski. Titcomb saw some preseason action during camp, and he thinks he's ready to play at that level.

"I felt right at home, like I could definitely play there," he said. "There's room for improvement, so I'm taking it for what it is and working really hard down here, working on my game defensively, offensively, taking on that leadership role, getting good minutes, and I'm really enjoying playing with these guys. It's basically like playing on an American League team with the talent that we have here in Wheeling. The guys are very, very good. They're pushing me every day. The ultimate goal is to get called up, when that happens that'll be great, but right now I'm just taking advantage of what I can here in Wheeling."

While he's playing in Wheeling, the goal is to help get the Nailers back to the playoffs. The Nailers haven't played in the postseason since 2016, the year the team went to the Kelly Cup Final. They finished in last place in the Central Division standings last season, but only five points out of a playoff spot.

Titcomb believes the Nailers have a real shot at a run this year.

"Last year we had a good roster," he said. "This year, quite honestly, I think we have a better roster, a lot more talent up front I think. Not making the playoffs was tough for everybody, we were a couple of points out going into the final two weekends. I said prior to coming in here we have some unfinished business -- not only getting to the playoffs, but making a nice little run. Not only for the guys in the locker room, but also for the community that comes out and supports us whether we're winning or losing."

• Forward Jan Drozg was assigned to Wilkes-Barre on Dec. 7. He's played two AHL games since then and hasn't recorded any points yet.

• The Nailers put goaltender Alex D'Orio on injured reserve, which requires a player to sit out at least 14 days in the ECHL. They reacquired goaltender Andrew D'Agostini, who was with the Nailers in camp, to back up Jordan Ruby while D'Orio is out.

• Dec. 6: vs. Kalamazoo, 6-2 win
The Wings opened the scoring 2:51 into the game, and Drozg responded 41 seconds later to tie the game. Brandon Hawkins scored two goals 29 seconds apart to increase the lead to 3-1. The Wings cut the Nailers' lead to one goal with a power play tally.

Midway through the third period, Ryan Scarfo scored a shorthanded goal, his seventh goal of the season, to regain the two-goal lead. Myles Powell scored his fifth of the year to make it 5-2.

Hawkins completed the hat trick in the third period with a power play goal, his eighth goal of the year, to seal the win.

Hawkins led the Nailers with an incredible 10 shots on goal, nearly half of the Nailers' shots as they were outshot 29-26.

The Nailers went 1-for-5 on the power play and 6-for-7 on the penalty kill.

• Dec. 7: vs. Kalamazoo, 4-1 loss
The Wings scored two goals, including a power play goal, in the first period of Saturday's rematch to carry a 2-0 lead into the first intermission.

The Wings scored the lone goal of the second period to increase their lead.

Yushiroh Hirano tipped in a Titcomb shot midway through the third period to get the Nailers on the board. It was Hirano's sixth goal of the year. The Nailers pulled their goaltender with over three minutes remaining in the game, and the Wings sealed the win with an empty net goal.

Cam Brown led the Nailers with five shots on goal as they outshot the Wings 25-18.

The Nailers went 0-for-5 on the power play and 5-for-6 on the penalty kill.

• Dec. 8: vs. Toledo, 5-2 loss
Hawkins opened the scoring for the Nailers with his ninth goal of the season and fourth of the weekend. The Walleye scored two goals in the first period and another in the second period to take a 3-1 lead into the third period.

Will Smith cut the Walleye's lead to one goal with his third of the year, but the Walleye scored two empty net goals in the final minute to win the game.

Hawkins recorded eight shots on goal as the Nailers outshot the Walleye 33-32.

D'Agostini took the loss with 27 saves on 30 shots.

The Nailers went 0-for-4 on the power play and 1-for-1 on the penalty kill.

• The Nailers’ record of 9-10-4 has them sitting in fourth place in the six-team Central Division, 10 points out of first place.

• The Nailers will travel to South Dakota for a three games against the Rapid City Rush (15-6-3) on Wednesday, Friday, and Saturday.

Drozg's goal came after a great play by Renars Krastenbergs:

Saturday was Mr. Rogers Night, and the Nailers wore some themed jerseys: