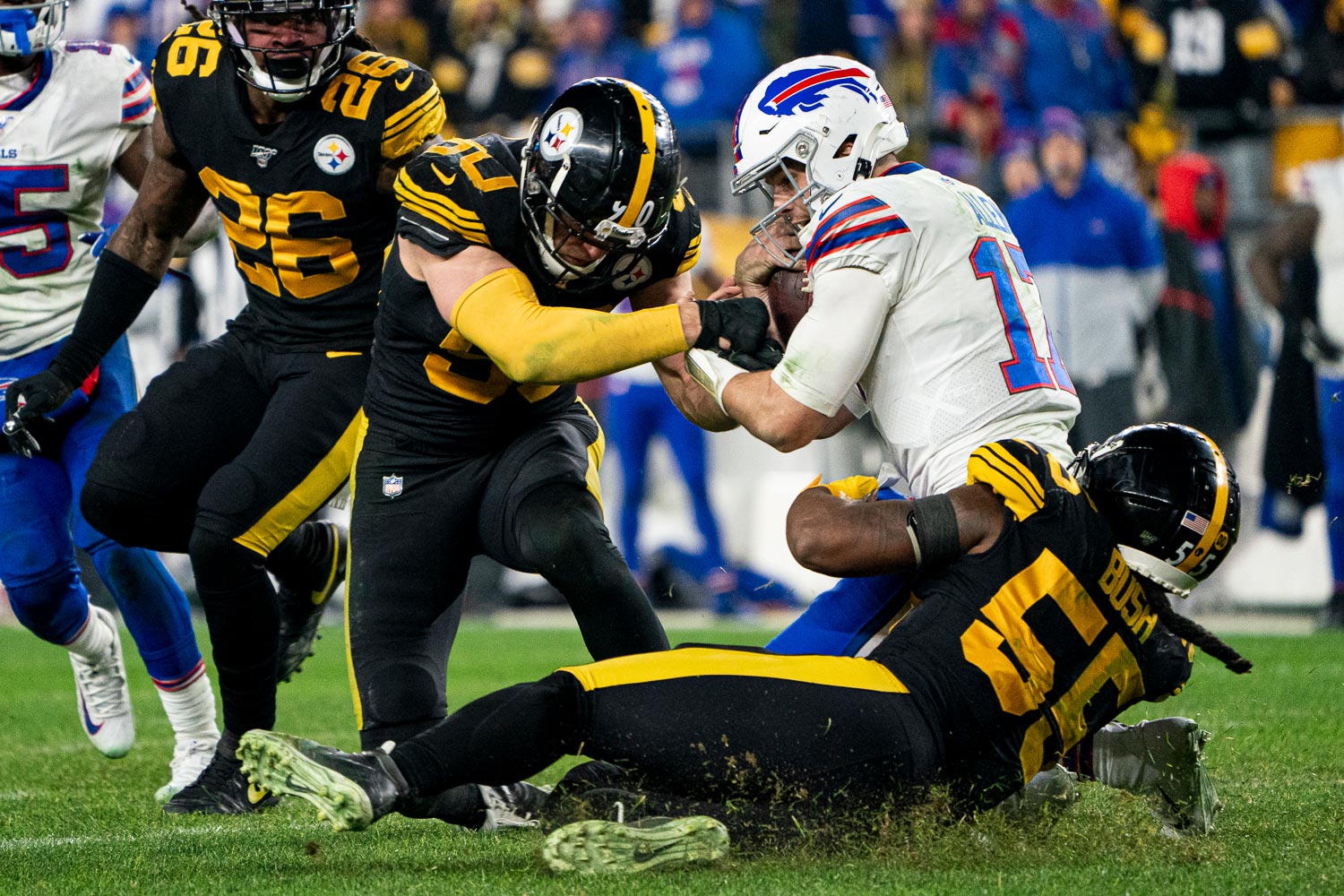 [theme-my-login show_title=0]
T.J. Watt punches at the ball while Devin Bush makes the tackle against Josh Allen during the Steelers' 17-10 loss to the Bills at Heinz Field. – MATT SUNDAY / DKPS
Share
Tweet
Email

Imagine being dissatisfied after doing this:

... Or this, the one that made me literally take my glasses off, wipe my eyes and watch it again just to make sure I actually saw what I thought I saw:

But, yeah, that was T.J. Watt and his Steelers teammates — totally disappointed, down and frustrated — late Sunday evening at Heinz Field. Forget the highlights, man, the team just lost, 17-10, to the Bills in prime time, falling to 8-6 in the process. Meanwhile, the Bills locked up a precious playoff berth with their 10th win of the season, leaving the Steelers to scrap it out with the Titans, Texans, Colts, Raiders and Browns for that sixth and final spot in the AFC.

"We know how to make it hard," Cam Heyward was saying at his locker after dropping this one. "Simple as that. I know we’re in good playoff position, but that crap doesn’t matter when you lose these games. These are critical games, and we have to think this is the last time we lose.”

Mike Tomlin put it another way:

“This one’s gone. We lived it," Tomlin was saying in his postgame press conference. "There’s scarcity in this business … There are no seven-game series and things of that nature. So we respect what transpired tonight. We understand it. And there’s nothing we can do about it as we sit here but get focused on our next opportunity. We will do that. I promise you that.”

Now, take a moment to glance back up top at those three highlights I embedded. That common denominator — Watt absolutely destroying professional football players — matters for this Steelers squad. He's the best of a stellar bunch, filling the stat sheet at a clip that has him in a real conversation to be named the NFL Defensive Player of the Year. But uhh ... Don't tell him he played well tonight.

“It’s back to the drawing board," Watt was saying after the game. "We’re going to study our asses off this week and practice well and come out knowing that we have another game this week to correct things … Win or lose, you have to have a short memory in this league.”

With the players in this locker room, the focus is clear: Week 16 on the road against the 5-9 Jets. So while they're not ready to talk about Watt doing stuff like this:

No, wait, wait ... Take another, zoomed-in-and-slowed-down look at that one:

That's Watt just obliterating Bills guard Jon Feliciano before hopping over the corpse and joining in with his squad on a crucial tackle for a loss. And even though the players were down and gloomy, zipping bags and packing up for a long ride home, I couldn't shake the images of No. 90 just wrecking shop and leaving a trail of bodies everywhere he traveled on this frigid December night on the North Shore.

It made me think ... is the Defensive Player of the Year talk just local hype? Or is there merit to it? Watt's obviously enjoying his best season as a pro, but is it that good?

I hit the books — and yeah.

Have a look for yourself (tap/click image to enlarge):

That's a table of stats for every Defensive Player of the Year over the past 10 years. OK, I lied a little: It depicts the last 11 years just so I could include James Harrison's 2008 win for comparison. When you distill Watt's performance to this question: When's the last time a Steelers outside linebacker did all this?! ... there's really only one answer. It's Harrison's 2008 campaign, and the numbers confirm it.

At his current pace, Watt could realistically match Harrison's sacks total (16, also a franchise record) and his tackles for a loss (16). Watt, through 14 games, already has more quarterback hits, fumble recoveries, passes defended, and interceptions than Harrison had in 2008. With one more forced fumble, Watt will tie that metric of Harrison's, too. And while Watt can't catch Harrison's 101 tackles, that's the least-impactful stat of the bunch, and Watt's wins in the other categories more than make up for the disparity there.

There's no doubt about it: Watt is doing ridiculous stuff right now on this Steelers defense, so much so that this from Sunday's contest is just a ho-hum, average play for him:

Destroy the flailing tackle, poor Cody Ford. Half-sack. Yawn. Here's what Watt wanted to say after the game instead:

Therein lies the full case for his Defensive Player of the Year bid. Watt's looking forward, forward, forward. And so are his teammates. He'll identify the mistakes and focus on fixing them before he'll take a second to soak in a sack or a strip, especially when the team still lost the game despite it all. Watt embraces that team facet, and it's his dedication to this mindset that's rubbing off on his younger, budding teammates.

Watt's dominance right now has him in the top echelon of most oddsmakers — alongside Stephon Gilmore (the favorite), Aaron Donald and Nick Bosa — to win Defensive Player of the Year. But Bosa, good as he's been as a rookie, has a fraction of the stats: eight sacks, 38 tackles, a forced fumble, and a pick. Nowhere near Watt.

Donald's Rams might miss the playoffs, and as you see from the chart above, making the playoffs or overachieving in some form is almost a requirement. Gilmore, the frontrunner, is the best player on a great Patriots defense, but even then, his volume stats — four interceptions, a fumble recovery, 14 passes defended and 42 tackles — don't pop off the page.

Watt's teammate Minkah Fitzpatrick, who is just behind this group in the DPOY discussion, is right there with Gilmore: five interceptions, three fumble recoveries, two forced fumbles, 57 tackles, and nine passes defended.

So for a player like Bush, who arrived on the scene with all the hype and expectations of being a first-round pick the Steelers actually traded up to get? Playing with players of this caliber — this tippy-top caliber — matters.

"To get to watch those guys week in and week out work, get ready for games, see how they prep different and look at the game differently [is vital]," Bush was saying. "So I think that was a big upside for me as a young player to come in and be able to watch those guys.”

You consider the impact a player like Watt has on the future like Bush, then you add in this: The Steelers' offense is statistically terrible. That's not an opinion. That's just sifting through numbers.

They're 30th in yards per game with just 285.7. They're 31st in passing. Twenty-sixth in rushing. Twenty-ninth in first downs per game. Devlin 'Duck' Hodges threw four interceptions on Sunday, and this Steelers team still lost by just one score.

That this Steelers team is 8-6 and still controlling its playoff destiny has nothing to do with anything happening on the offensive side of the ball. They're in playoff contention despite all that. And that starts with Watt disrupting and swarming and swatting and sacking, then it trickles to other playmakers from there.

The Steelers, for their part, recognize it all.

"I know the guys in this locker room, and no one’s happy with the outcome tonight," Watt said. "Back to the drawing board. We’ll look at the film like we do after a win or a loss and get better where we need to get better and keep improving on stuff we’re doing well.”

“I like our team," Heyward added. "We’re going to attack it on Monday and get ready for New York. And New York’s not going to lay down. They got a good quarterback, a good runner, and we gotta make sure we take care of our jobs. I think the Bills did a great job, but I’m looking in this room and thinking, ‘We gotta execute better. We gotta make those stops when we need ‘em.’”

Maybe it starts with that DPOY candidate in Watt.

But it'll take a polished, group effort to finish this season with anything beyond a Wild Card exit. The Bills just proved that.