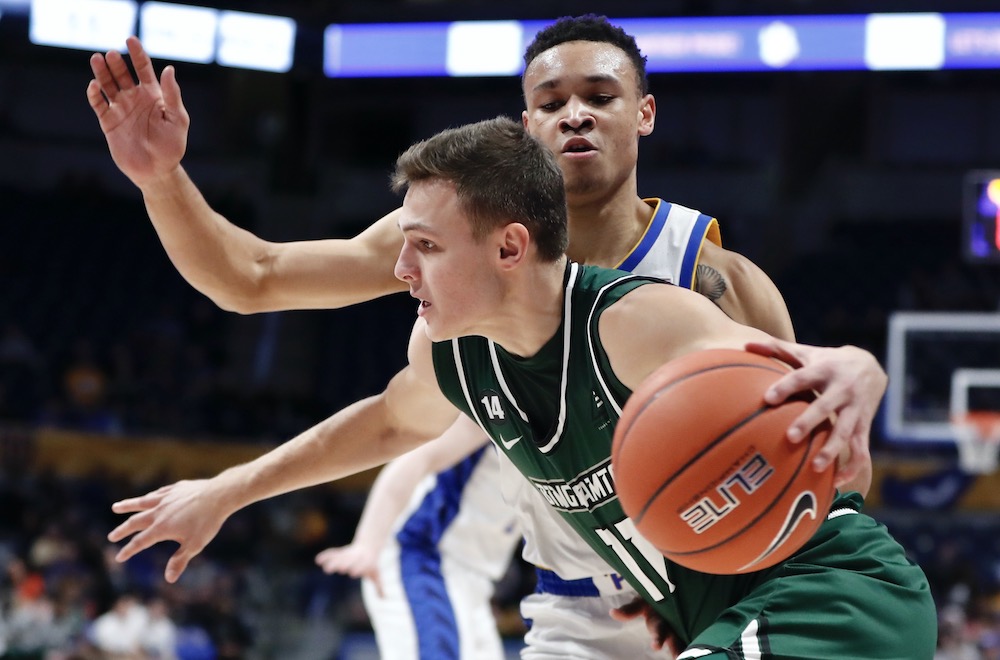 Pitt destroyed poor Binghamton, 79-53, Friday night at Petersen Events Center — and, man, it must have felt good for these Panthers.

Words could explain. But I'm just going to leave this here instead, sound and all, so you get the full audiovisual impact:

No, not the two players actually making the play on the court — that's KJ Marshall driving and missing and Samson George cleaning up the glass for two — but all those more familiar faces on the bench.

Au'Diese Toney is hopping out of his shoes. Xavier Johnson slides into his seat with a grin stretching to the Mon. Ryan Murphy whips his towel, and Justin Champagnie looks both ways before crossing the threshold to post-victory bliss.

It was exactly what this young Panthers squad needed: A blowout over an inferior opponent.

So, of course, I had to lead the postgame press conference with that:

That was so much more measured and calculated. I'd even say that was a ... reasonable reaction, nothing at all like the enthusiasm I watched unfold as the game ticked to its end. And that response, from the freshman Champagnie no less, was perfect.

All he did in this game was put up a team-high 14 points, 10 rebounds, a block and two steals in 30 minutes of play. He sliced and diced Binghamton's zone all night, and the opposition had no answers. Making things even sweeter for Champagnie, he did all this after scoring just nine points combined in his last three games.

He had eight of those in Pitt's last contest, a win against Northern Illinois.

So, yeah. This one was necessary for him.

"It's kind of hard [being in a slump] because then it's like, you keep missing and you get in your head. You lose your confidence, but you just gotta run with it," Champagnie said. " ... For the past week, I was in the gym with coach. I just kept shooting just to get my confidence back. I just [had] to see a couple of them go in and build it back up."

That type of composure from a freshman is rare, and it becomes particularly intriguing when you consider he did his work against a zone defense from Binghamton on the night. The zone may not force as much pressure up front, but it requires a calculated, precise attack plan — with and without the ball — and Champagnie displayed both Friday night.

"One of the things a zone can do is that it can slow you down and make you think," Jeff Capel was saying after the game.

Usually, that's when a freshman will find himself in trouble. The college game is still new, the moment's bigger than it's ever been and now you have to process, to think and to decide immediately what that next move's going to be.

Champagnie, however, navigated the challenge beautifully.

"Justin, in high school, was more of a mid-range, around-the-basket slasher," Capel said. "That's who he was. We've tried to expand and get him to play a little bit more on the perimeter and to be comfortable shooting threes. We need to get him where he's making threes consistently now."

OK, let's ice this blowout victory with an X-factor among the talking points.

Pitt won by a billion, sure. They dominated the turnover battle, forcing 27 while generating just 11 of their own — nine of those in a mostly meaningless second half.

He finished with nine points on 3-for-6 shooting alongside four rebounds, six assists and three turnovers in 32 minutes. And he was smiling and loving every second of it.

Think that feels good for him, the star of the show who sometimes feels the weight of this team on his shoulders? That Pitt can win without a mammoth effort from their star point guard is a massive deal, one that Capel acknowledged after the game.

"One of the things that we talked to he and Trey, especially, about is that you need these other guys," Capel said. "There's a lot of attention on them because of what they did last year and their reputations as players, and that reputation was earned by how they played last year ... For us to be able to score 79 points tonight without him being in double figures — certainly it was good to see Ryan Murphy make some shots in the second half. So again, we're going to keep working. We're going to keep plugging away at this thing. Our guys have had really, really good attitudes up to this point."

In the end, this blowout win to move to 9-3 just before Christmas feels like the perfect gift to Capel and his squad.

"It was a good win for us heading into the holiday," Capel said. "I thought we did some good things in this game ... After the first four minutes of the first half, I thought we were really good for the rest of the half. I think at the under-16 timeout we had two turnovers. We had two at halftime. So we valued the ball. We got into a better rhythm offensively and we were able to create some offense from our defense."