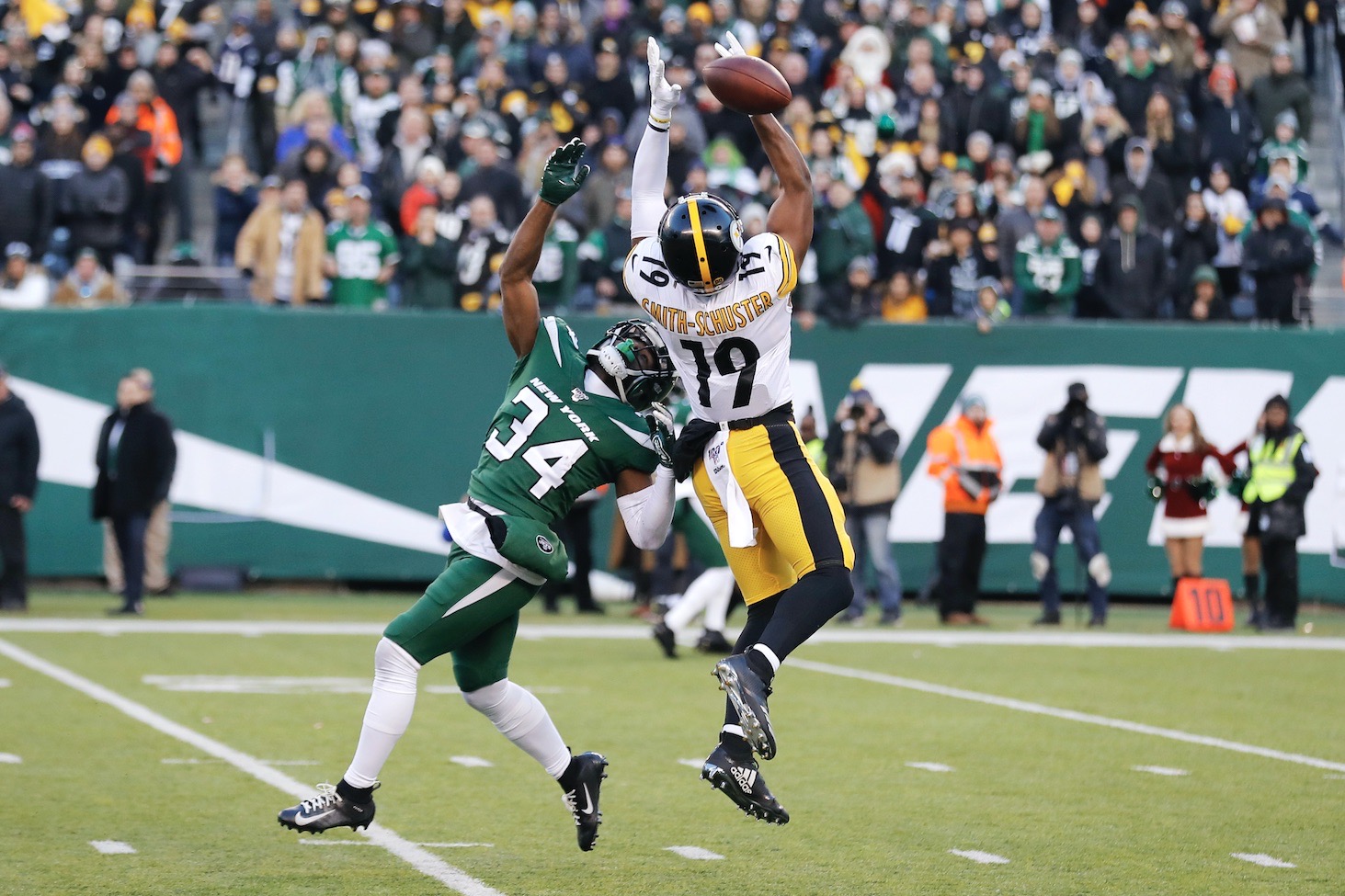 Maybe the one that'd put the Steelers into the playoffs.

"James had one-on-one coverage," he'd describe a lot later,"so I tried to give him a chance with a jump ball."

That was Marcus Maye, the Jets' free safety, and his superlative play superseded all else.

Washington saw it, felt it ... and then came down so hard on his ankle that he'd need to be heavily iced afterward. As if he hadn't suffered enough:

"We kind of both caught it at the same time," Washington recalled, "and as we were falling, I tried to rotate away from him. And then his hand got in there and jarred it out."

Just a great play by the defender, then?

"It was probably one of my top plays, for sure," Maye would say, and he meant for his career.

Agreed all around. Washington battled, got beat. No one with whom I spoke saw it differently.

But in this weird, wonderfully fun season, no way this script would close there. And it didn't. An even better pass, an even better chance would follow.

The first play up there was third-and-7. The next, of course, would be fourth-and-7. The first play came with 51 ticks left, this would be 44. Same as the number of yards the Steelers needed to span toward the end zone to tie.

Which brought this as the curtain that came crashing down ...

To JuJu Smith-Schuster, no less. To the anointed No. 1 wide receiver in the Antonio Brown aftermath. To the wunderkind around whom the future of the offense would be built. To the social media superstar, having risen in that regard far above the level of his actual achievements.

And right down into the turf.

And with it, in all likelihood, all the weird, all the wonderful, and definitely all the fun.

One week to go, and the only way into the playoffs now is to win in Baltimore and hope the Titans lose to the Texans.

He should've caught it. Just ask him:

"Super frustrating," JuJu began when asked simply about the loss. "It's more frustrating when it's the last play of the game, and you expect your guy to make a play. I didn't make the play. It's not the first time I've let down my team or let down Steelers fans. But it's the worst feeling in the world."

Did he lose track of the ball?

Has it been a challenge all year to overcome all the rotating quarterbacks?

"All I can think about is not making that play."

Has he felt additional pressure?

"If I make that catch, I go into the end zone, we score, that's it. At the end of the day, that game is on me. That's my fault. Sorry, everybody."

With that, he sent a clear signal his interview session was over, he sat back down on the stool in front of his stall, buried his head between both of those hands that didn't make that catch, and appeared completely inconsolable.

Thing is, he was right: He has cost the Steelers big games. He has cost them, in all likelihood, a playoff spot, coupled with his critical fumble a year ago in New Orleans.

I'll go further: He barely made any impact on this outcome until that final throw. He caught two passes on four targets, the two non-catches both coming on eminently catchable balls. He wasn't double-covered at any point, and yet he didn't find his way open for his first target until the final minute of the first half.

Worse, he's been a big-time disappointment this season, missing a month to injury before returning for this game, making only 40 catches for 546 yards and three touchdowns.

Want to blame that on his nagging knee injury, which he'd declared Friday wasn't "100 percent" healed?

Fine, but in football, if you've got a helmet and you're running routes, you're good to go. And if he showed any ill effects of that knee in any form, before or during the game, they weren't seen from this press box perch.

Want to blame the QBs?

Also fine. Duck's benching was deserved. Mason Rudolph, while promising in his brief return, didn't last long before hurting his left shoulder and going right back out. And never mind the small detail that Ben Roethlisberger's a presence only inasmuch as his beard and girth growing by the week over on the sideline. Needless to say, continuity at that position counts.

But if citing that as an excuse, feel free in the same breath to explain how Diontae Johnson's stepped up in the same setting, the same circumstances, with eight catches on nine targets for 81 yards, 29 of those on this gorgeous sequence with Rudolph to tie, 10-10, at the half:

Been a while, huh?

Johnson's caught a bunch of those, though, and he's even added some yards after the catch. Same with Washington. They've both legitimately progressed.

Not JuJu. Not at all.

I'll get grief over this, as most everyone seems to love the guy, plus he's anything but singularly at fault for what happened here. There were many messes, many disappointments, many dubious decisions, and even the defense made some rare slips.

Still, from the broader scope, JuJu means way more to the franchise than this game or even this season. Or at least he should based on the potential already shown. And right now, he'll wind up with barely a third of the 110 catches he had in 2018 with Roethlisberger at the helm. Same goes for the yardage, the first downs, everything. He hasn't been making plays, and he sure hasn't been breaking plays. He's nothing at all like he was in 2018 or, for that matter, as a rookie in 2017.

Because of his round-the-clock presence on Twitter, Instagram and other social forums, never mind all the paid visibility via TV and online video, it's easy to paint him as being uncommitted. Concurrently, it's also easy to sound like grumpy, get-off-my-lawn fossil in doing so.

But who could possibly reject this thinking out of hand?

Especially after all this?

Look, I couldn't care less what JuJu or any other athlete I cover does in their personal life, provided it isn't criminal. A job is a job, and real life is real life. I also don't care if he's an attention hog, if he engages in civic charity primarily to have it recorded by the people he pays to manage his social media, or if he's flagrantly duplicitous, behaving one way in front of cameras and 180 degrees differently when they're off.

But the fact that I'm typing this after the Steelers' defining game of 2019 and wondering if it affects his job ... yeah, that's a thing.

The fact that, on evenings following missed practices, he pops up hanging out at Penn State frat parties half a state away ... yeah, that's a thing.

The fact that, when asked Friday what he'd have to do to keep his knee healthy for Sunday, he replied, maybe tongue-in-cheek but maybe not, “Don’t go out. Don’t go out and party. Don’t go out dancing. Just stay home and make sure my knee is good" ... yeah, that's definitely a thing. 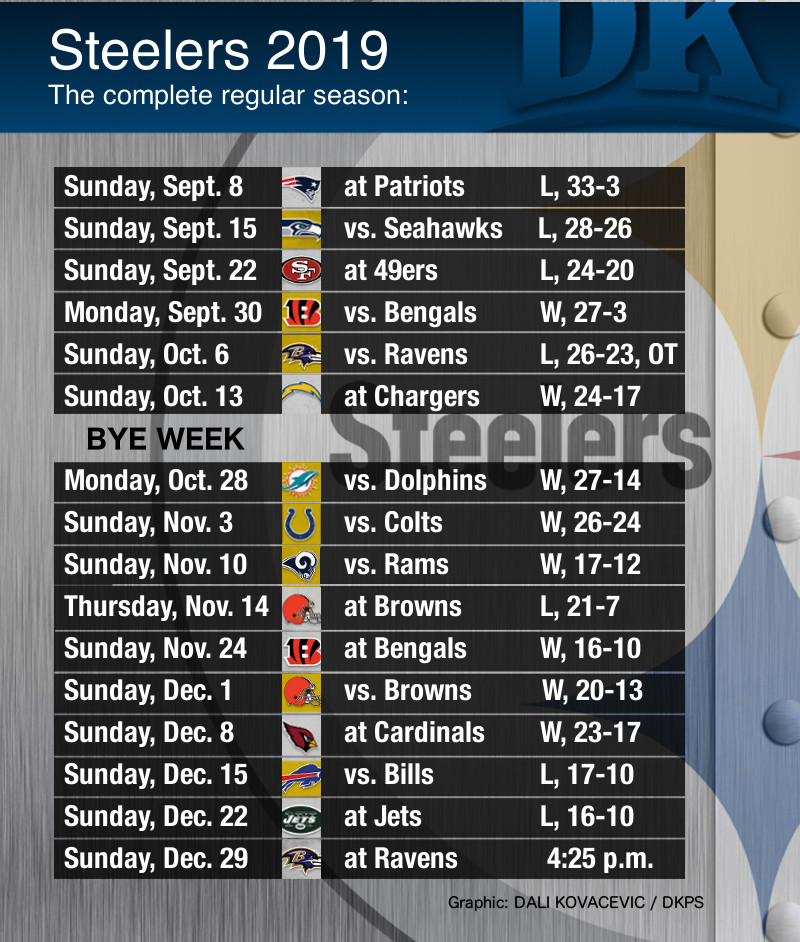 OK, so AB's disintegration continues to manifest in the form of being a dirtbag, not least of which was this cheap shot at JuJu late Sunday night:

Some guys wish to be #1 some guys just Are

Football's unfair in that it functions in small sample sizes. Only 16 games. Maybe only one or two that really define a player or a team. But that's been the case since Bobby Layne was a lad, and it's not about to change. It's about being as ready as possible for those big moments. It's about all the reps, all the concentration required to make those moments, within the moment, feel routine.

Something's generally off with JuJu. I don't know what it is and, again, I don't care. But here's betting the Steelers sure as hell do. And should.