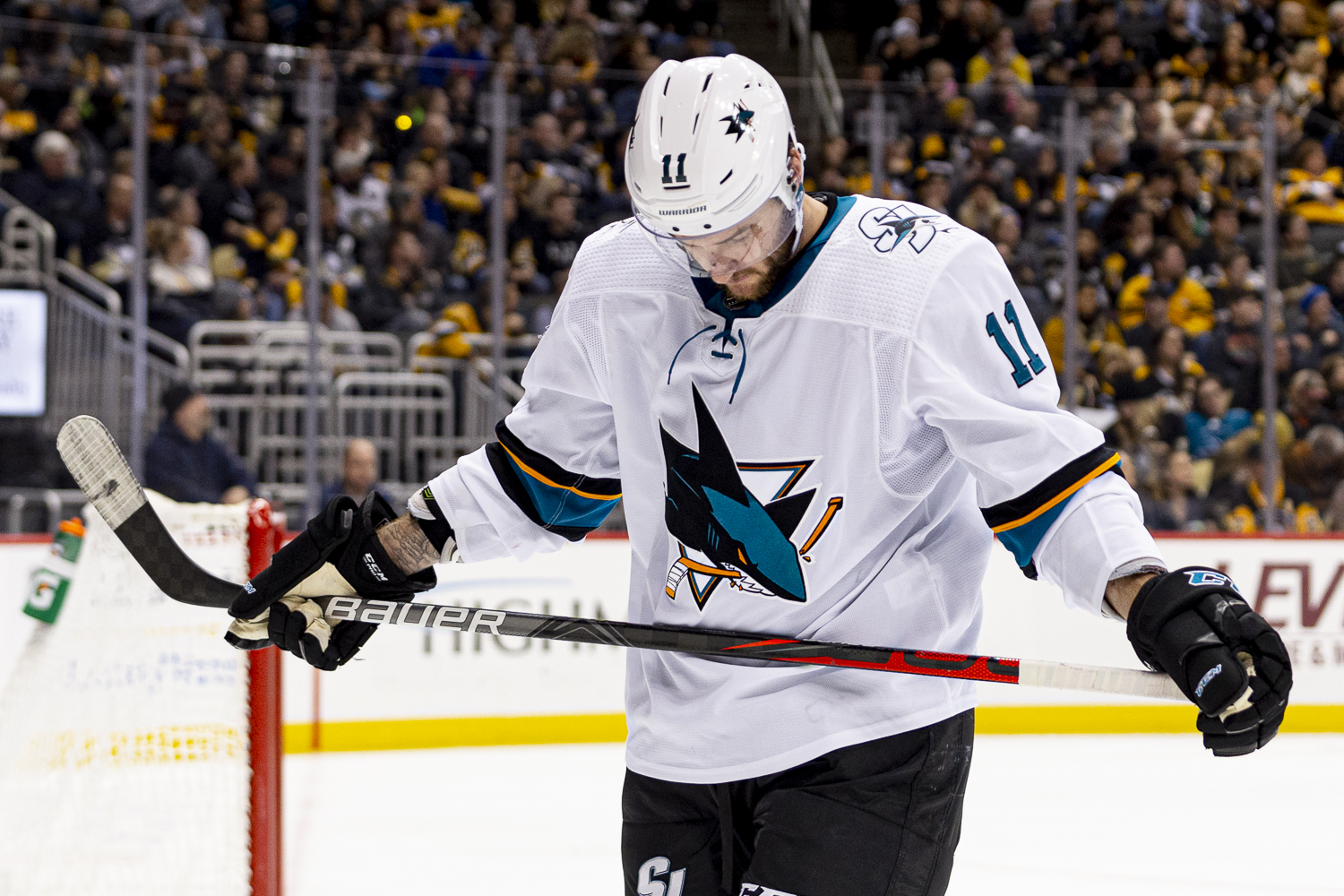 [theme-my-login show_title=0]
Stefan Noesen skates during a time out against the Penguins after being waived by them. -- MATT SUNDAY / DKPS
Share
Tweet
Email

Forward Stefan Noesen will make his much-anticipated return to PPG Paints Arena tonight when his Sharks play the Penguins at 7 p.m.

Noesen began the year on an AHL contract with Wilkes-Barre/Scranton, leading the team with 22 points in 22 games. After a string of injuries to forwards, Pittsburgh signed Noesen to an NHL contract on Dec. 2. He made his Penguins debut two nights later, and scored a goal in his first game. After six games with Pittsburgh, he was placed on waivers on Dec. 18 and claimed by the Sharks the next day.

"It was an unfortunate circumstance for (the Penguins)," Noesen told me after the Sharks' morning skate. "I don't think they anticipated me getting picked up, but that's the nature of the business."

Noesen's time in the organization was short, but he's thankful for the Penguins' role in getting him back to the NHL

"It was good to be wanted here," he said. "It gave me a chance to get back to the NHL. I thank them for everything they did in getting me back."

Noesen made another good first impression when he joined the Sharks, scoring in his first game with the team:

Got the first goal with the new team out of the way quick! @stefannoesen | #SJSharks pic.twitter.com/zckbbXLHU8

That's been his only point in his first five games with San Jose, but head coach Bob Boughner has liked what he's seen from Noesen so far. Noesen has primarily played a fourth-line role since joining the Sharks, but in the middle of their last game Noesen was promoted to the Sharks' top line with Tomas Hertl and Logan Couture.

"Noesen's a guy that can make plays," Boughner said. "He has patience with pucks, he doesn't throw them away. He's a guy you can put up on different lines, and I think he can complement the offense. I do like the energy he's playing with on (the fourth line) right now, but I can see even tonight on times putting him up on different lines."

Noesen's NHL career has spanned 170 games over stints with the Ducks, Devils, Penguins, and now Sharks. He played 145 of those games with the Devils, where he spent the last two and a half seasons before joining Wilkes-Barre. Looking back at Noesen’s NHL stats, the team he consistently performed the best against with the Devils was the Penguins, against whom he recorded three goals and three assists in six games, including a game-winning goal on Feb. 27, 2018.

“They were one of my favorite teams to play against, honestly," Noesen told me earlier in the season. "I don’t know if it was the way they play and the way I play, I was kind of the pest against them every time at home."

Noesen is looking forward to hopefully having another big performance against the Penguins, and also catching up with some friends.

"The Penguins are a team I know I've always played well against," he said. "Especially in Jersey, we had some pretty good battles. And I still have some good friends over there; I keep in touch with them. It's only been two weeks, so you can't really lose touch with people that quickly," he laughed. "It's fun. Going back to the place you were before is always fun."

Noesen is still getting acclimated to his new home, his third this season, but there's definitely one part of being back out west that he's already enjoying.

"You wake up in the morning and 10 o'clock football is on," he laughed. "That's the best part."

• The Penguins didn't skate this morning. The Sharks' skate was optional, so we won't see the lines until tonight.

• Aaron Dell will start in net for the Sharks.