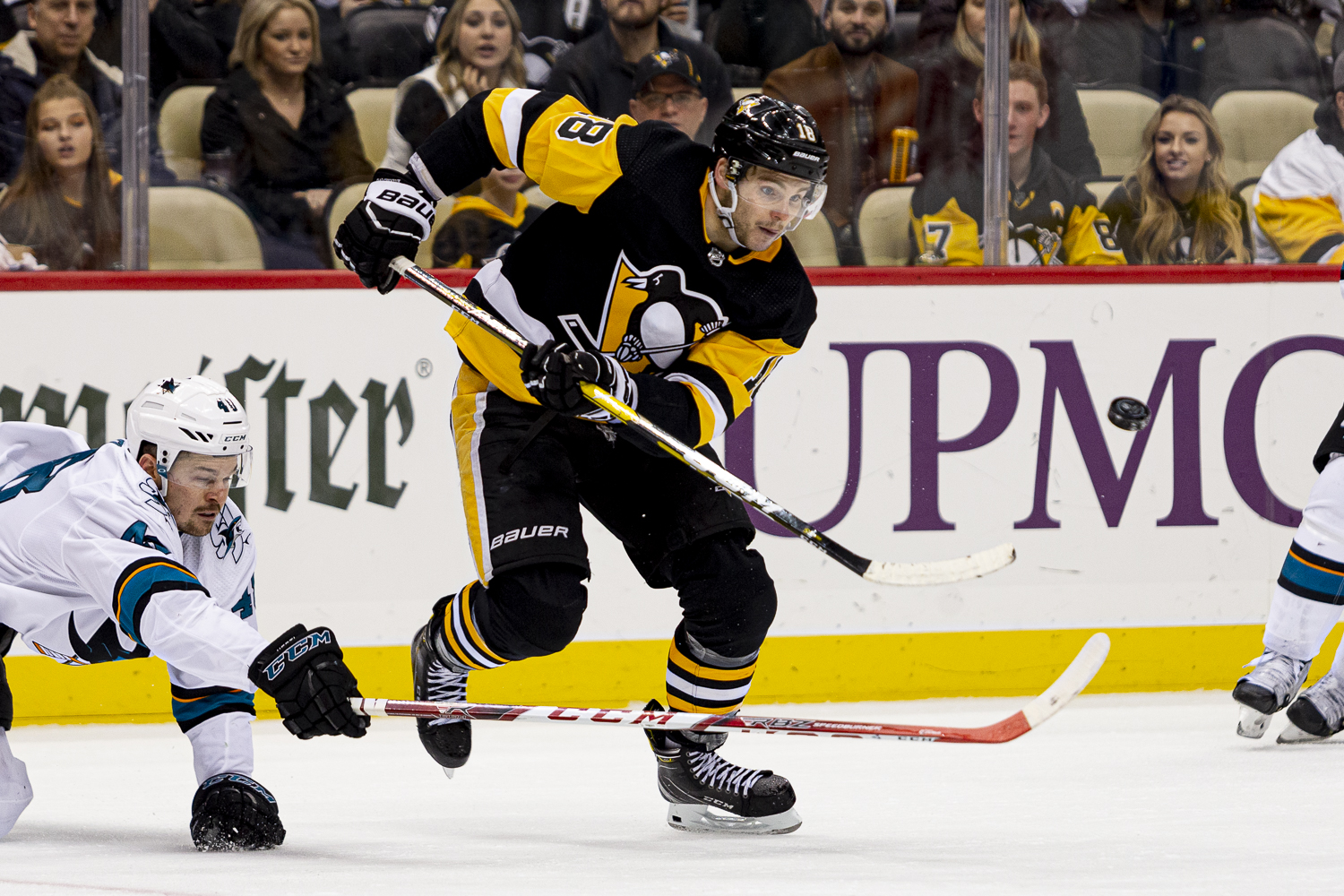 The Penguins on Thursday used the first line of Alex Galchenyuk, Evgeni Malkin, and Bryan Rust for the first time in a 3-2 overtime loss to the Sharks

Before the game, Mike Sullivan spoke about how much time he could anticipate giving the new top line to work on building chemistry before the coaching staff makes adjustments to the lines. It's not a clear answer.

"If we think tweaks to the lines are necessary to try to win the game, then we'll do it," Sullivan said. "If not, we'll exercise some patience and see if that can help us as well."

The top line remained together for the entire game, but the jury is still out on whether this combination will stick. In Sullivan's postgame press conference, he didn't exactly give a strong endorsement of the line's first game.

The top line's first game wasn't anything special. In 17:15 of ice time at even strength, they were on the ice for 19 shot attempts for and allowed 15, a ratio of attempts for vs. allowed that was 2.33 percent lower than the Penguins had when those three were not on the ice. When you eliminate blocked shots from either side, the attempts for vs. against were even at 12 apiece, which is 12.96 percent decrease in rate than when the top line was not on the ice.

When you narrow the attempts down to actual shots on goal, the line was on the ice for nine shots for and 11 against at even strength, a ratio 13.54 percent lower than when the top line wasn't on the ice. Four of those shots came from Galchenyuk alone. Three came from Rust, and one from Malkin.

The context is important here. Obviously, the first line is a scoring line, and that affects their deployment. The top line took 14 offensive zone faceoffs, 10 in the neutral zone and just two in the defensive zone, so they were put in good opportunities to generate chances, and were a little sheltered defensively.

While the top line was producing shots and attempts at a ratio that wasn't impressive, the shots they were getting off were ones of quality. They were the only Penguins' line to generate any attempts off of a clean rush, and they did so three times, twice by Galchenyuk. They picked up rebounds for chances twice, which was twice as many as any other line. Both rebound attempts came from Galchenyuk. They generated the most high-danger chances of any of the Penguins' lines, with four. Two of those were Galchenyuk's.

Most of the quality opportunities from that line coming from Galchenyuk isn't much of a surprise. After Wednesday's practice, Rust said he hoped to be able to give Galchenyuk the time and space he needs to be able to do just that.

“He’s got a really good shot," Rust said on Wednesday. "I hope that I can help that out, use my speed and create some space and open up some time for him in the slot so he can use that shot.”

Rust and Galchenyuk did team up together on Patric Hornqvist's second goal of the game, when the forward lines weren't yet back intact after a Penguins power play expired. Galchenyuk passed the puck to Rust, who fed it to Hornqvist just outside the crease for a redirect goal:

"I think Gally did a good job of stepping up and filling in," Rust said. "He made some good plays tonight. He made a good play on Hornqvist's second goal, we just have to build on that."

Nobody is going to be able to replace the offense that Jake Guentzel brought to this line. That can't be the goal. But for the time being, this combination looks like they at least have a little potential to contribute. "Decent" is what they were in their debut. They didn't have any glaring deficiencies. They didn't show much greatness either, but they had moments that they can look to build on in the games moving forward.