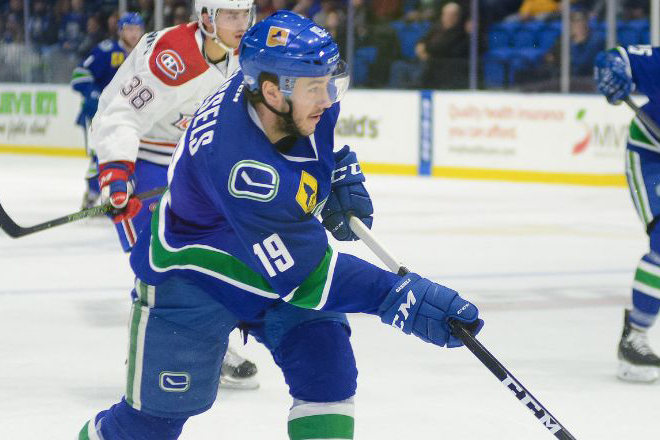 The Wilkes-Barre/Scranton Penguins have signed forward Cole Cassels to an AHL contract for the remainder of the 2019-20 season, the team announced on Saturday.

Cassels, 24, was playing for the AHL's Belleville Senators on a tryout contract this season, where he scored three goals and five assists in 24 games. He began the season on an ECHL deal with the Utah Grizzlies, where he recorded two goals and eight assists in seven games.

Cassels was a third-round pick by the Canucks in 2013. Prior to turning pro, he won a Memorial Cup with the OHL's Oshawa Generals in 2015, a run in which he went head-to-head with and shut down Connor McDavid in the Generals' series with the Erie Otters.

The 6-foot, 180-pound center played three seasons for the Canucks' AHL affiliate Utica Comets from 2015-18, appearing in 202 games and scoring 15 goals and 29 assists.

The Canucks did not re-sign Cassels after his entry-level deal expired, and he spent the 2018-19 season in the German DEL with Grizzlys Wolfsburg. He scored seven goals and 17 assists in 50 DEL games.

Cassels' father, Andrew, was a first-round pick of the Canadiens in 1987. He played in 1,015 NHL games over 16 seasons with the Canadiens, Whalers, Flames, Canucks, Blue Jackets, and Capitals.