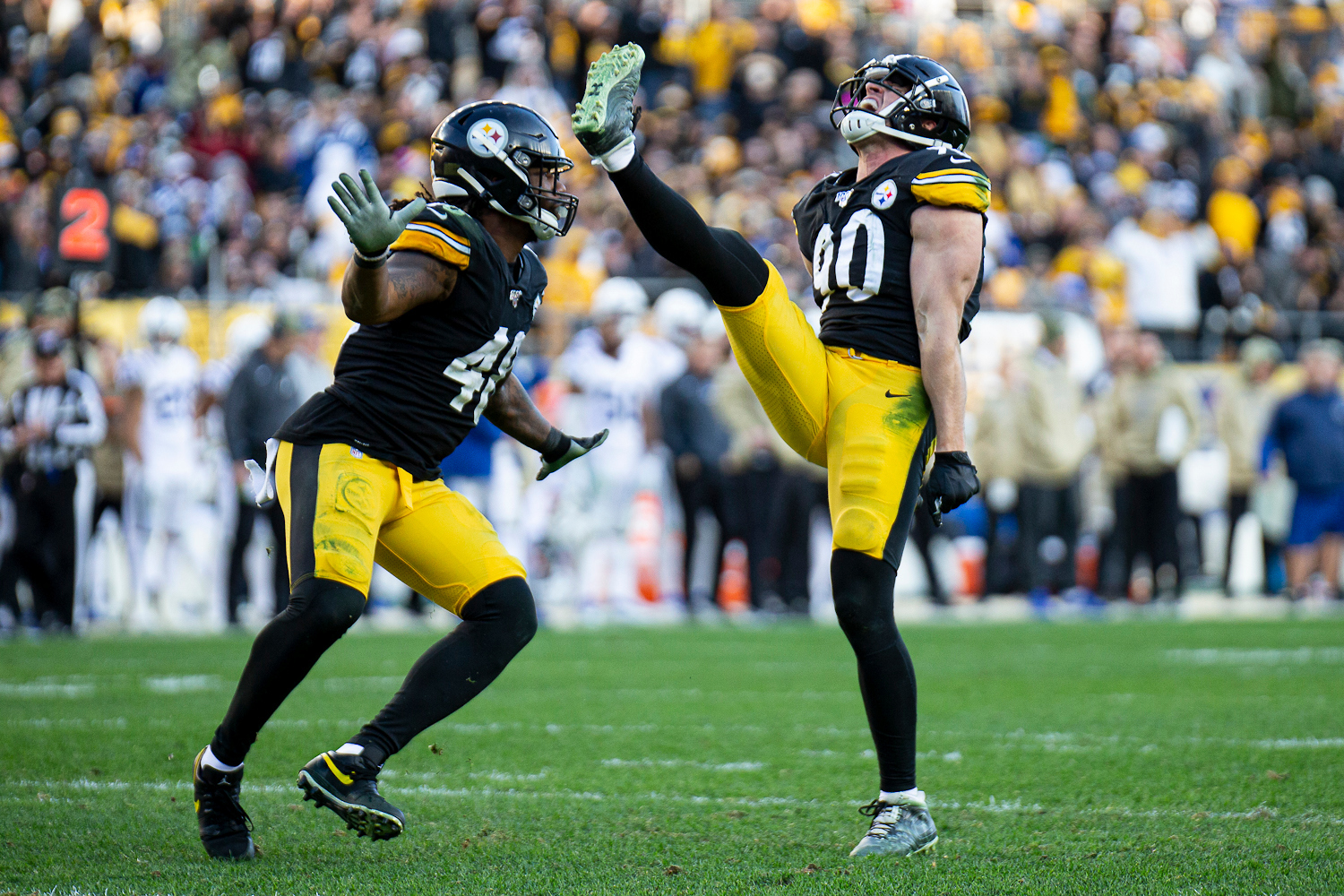 We graded the Steelers' offense here Saturday and the results weren't pretty. If you brought home a report card with an F, two Ds and two Cs, mom and dad wouldn't be happy.

But now it's time to turn our attention to the favored child for the Steelers -- the defense.

How favored has the defense been?

The team hasn't spent a first-round draft pick on an offensive player since taking David DeCastro in 2012. And it won't do so again this year, having already traded its 2020 top pick in the deal to acquire safety Minkah Fitzpatrick.

The numbers bear that out. In their final 14 games, the Steelers allowed an average of 263.3 yards per game. They forced 36 turnovers in that span while recording 49 sacks, allowing an average of 17.3 points per game. And all of that was done with an offense that wound up 31st in the league in total yards, often leaving the defense on the field for extended stretches because of three-and-outs.

Stephon Tuitt was off to a monster start to 2019 when he was felled by a torn pectoral muscle early in a Week 6 game against the Chargers.

To that point, he had already recorded 22 tackles, 3.5 sacks, seven quarterback hits and six tackles for a loss.

With Tuitt out, Cam Heyward turned up his game even more. Heyward was playing a shade over 70 percent of the defensive snaps prior to the Tuitt injury. That number shot up to well over 80 percent of the snaps over the final 12 games.

He responded by shattering his career high with 83 tackles to go along with nine sacks, 22 quarterback hits and 11 tackles for a loss while earning first-team All-Pro status. The 83 tackles were the most for a Steelers defensive lineman since Donald Evans had 84 in 1993.

Javon Hargrave saw his snaps increase from playing just 43.6 percent in 2018 to 62.8 percent this season to help replace Tuitt. The nose tackle recorded a career-high 60 tackles with four sacks as he heads into unrestricted free agency.

He's a solid player who excels at penetration. But his play could price him out of Pittsburgh.

Veteran backup Tyson Alualu also showed why he's a valuable backup, producing 40 tackles. He's not much of a pass rusher, however, as his one sack and three quarterback hits would suggest.

Rookie Isaiah Buggs and veteran Daniel McCullers provided depth to a line that as a group produced 17 of the team's league-best 54 sacks while giving up 3.8 yards per rushing attempt, the third-lowest in the NFL.

The team has to find a better backup nose tackle than McCullers. And if Hargrave leaves, it will need a replacement there, as well.

T.J. Watt and Bud Dupree didn't drop as much in 2019 because they didn't have to. The Steelers generated a pass rush from their front four without needing to send as many corners or safeties.

As a result, Watt led the AFC with 14.5 sacks, while Dupree had 11.5. Both were career-high marks. The 26 combined sacks was a half-sack short of the team record for an outside linebacker duo, falling in just behind James Harrison and LaMarr Woodley in 2008, when Harrison was NFL Defensive Player of the Year.

Watt had a similar kind of season to that of Harrison that season. In addition to his sack total, he tied for the NFL lead in forced fumbles with eight, intercepted two passes and recovered four fumbles to go along with 55 tackles, 36 quarterback hits and 14 tackles for a loss.

How consistent was Watt? He either had at least half of a sack or an interception in each of the Steelers' final 15 games of 2019 while earning first-team All-Pro status.

Dupree got snubbed in the postseason all-star voting, but he had his best season with the Steelers. The 2015 first-round draft pick led the team with 16 tackles for a loss while setting his career highs for sacks, tackles (68) and quarterback hits (17).

Dupree will be an unrestricted free agent in March and the team is making keeping him a priority.

Anthony Chickillo was the primary backup at outside linebacker, but missed five games in 2019 because of injury and while sitting out on the Commissioner's Exempt List as the league looked into potential domestic violence charges against him.

Chickillo was signed to a two-year, $8-million deal to return last offseason as insurance in case the Steelers didn't want Dupree back. His cap hit jumps from $1.9 million in 2019 to $6.1 million in 2020. It's doubtful he'll return.

That could leave a pair of former University of Toledo stars as the backups in 2020. Ola Adeniyi needs to get more stout at the point of attack, but he's a solid pass rusher and special teams player. The team felt good enough about Tuzar Skipper, meanwhile, that it not only signed him back at midseason after losing him to the Giants at the end of the preseason, it signed him to a two-year contract at the end of the season to make sure he sticks around.

This group was a mixed bag in 2019. While first-round draft pick Devin Bush led the Steelers -- and all NFL rookies -- with 109 tackles, he struggled when asked to play zone coverage. That will certainly get better as he gets a better feel for the game, as Bush proved that he was quite adept in playing man-to-man.

Veteran Mark Barron manned the dime linebacker position because Bush wasn't quite ready yet and had his moments, both good and bad. He was, however, a massive upgrade over the player he replaced, Jon Bostic.

With the addition of both Bush and Barron, Vince Williams saw his defensive snap count fall to just 36.8 percent, about half the total he logged in 2018.

All told, that trio was pretty good. They combined for 245 tackles, 15 quarterback hits -- nine by Williams -- three interceptions, 6.5 sacks and six fumble recoveries.

Rookie Ulysees Gilbert showed some promise before landing on injured reserve with a back injury. Assumed improvement by Bush and Gilbert could make Barron and his $8.125-million cap hit expendable in 2020.

The group of Joe Haden, Steven Nelson, Mike Hilton and Cameron Sutton was as good as just about any in the league in 2019.

A ferocious pass rush helped, but this group also allowed for the pass rush to get home at times, as well.

The team allowed a passer rating of 79.7 and the corners were obviously a big part of that.

Haden recorded five interceptions, the most for a Steelers cornerback since Chad Scott had five in 2001. Nelson, signed to a three-year, $25.5-million free agent contract in the offseason, trailed only All-Pro Tre'Davious White in terms of targets without allowing a touchdown pass.

Hilton and Sutton shared nickel and dime corner slot responsibilities and overcame a slow start to put together a solid second half, including shutting out Rams talented slot receiver Cooper Kupp in a November win.

Artie Burns made one spot start in place of an injured Nelson in Week 6, but largely was relegated to special teams. The former first-round pick is an unrestricted free agent and won't be back. He was replaced on special teams late in the year by third-round pick Justin Layne, and Layne showed ability as a gunner, something that could bode well for him in the future.

The Steelers ranked seventh in the league in completions allowed to opposing receivers giving up 172 on 295 targets.

For the Steelers defense in 2019, there was the pre-Minkah and post-Minkah periods.

Fitzpatrick didn't join the Steelers until Week 3, which meant first-year player Kameron Kelly started the opener at New England in place of an injured Sean Davis. That didn't work so well, as Tom Brady made sure to exploit Kelly, who was appearing in his first career NFL game.

Davis returned the following week against the Seahawks, recording five tackles, but leaving that game with a shoulder injury that would end his season. Davis is headed for unrestricted free agency.

The Davis injury prompted the trade for Fitzpatrick, who had informed the Dolphins the previous week that he wanted out of Miami, where they were using him as a nickel corner, linebacker and safety.

The results, as listed above, were startling. The Steelers would have still had a very good defense without Fitzpatrick. But he made them a great defense, picking off five passes, forcing two fumbles and recovering three others.

But once opposing teams figured out they didn't need to take chances against the defense because the Steelers were offensively challenged, Fitzpatrick's production fell off. Over the final seven games, he had one pass defensed, one fumble recovery and 23 tackles as he wasn't tested.

Terrell Edmunds was OK in his second season as a starter. You'd like to have seen more big plays out of the second-year safety, but he finished second on the team with 105 tackles and was a factor in the team's improved tight end defense.

He's shown good ball skills in training camp and had six interceptions in his final two seasons at Virginia Tech, so there's still some hope the turnovers will come.

With he and Fitzpatrick both in just their second seasons, the Steelers have some time for these two to grow together.

Kelly was released after a late-season arrest on the South Side, while Jordan Dangerfield and Marcus Allen, who replaced Kelly after his release, are more special teams-type players than they are guys you want to play on defense.

And Dangerfield is headed into unrestricted free agency, so this is a position that could use an influx of talent for depth purposes.

We've got to balance out the play of Fitzpatrick (an A) with the play of the rest of the safeties (a C), which gives us our grade.

The difference from previous years, however, was that they didn't have to scheme up a pass rush. It came organically from the front winning one-on-one battles.

That allowed for better coverage on the back end.

Coordinator Keith Butler, who also took over coaching the outside linebackers again when Joey Porter was not retained, had a good season.

When Tuitt was lost, we saw him get creative, using a package with just one defensive lineman (Heyward) on the field at times. We also saw packages with three defensive linemen and Dupree deployed as a defensive end and Watt stacked, multiple safeties, etc.

The Steelers had the talent and ability to do a lot of different things defensively. And the results were evident.

The 54 sacks this season came despite the team winning just two games by more than a touchdown all season. Imagine what it could look like if the offense gives it more leads with which to play.

Keeping Dupree will be critical to that. While the Steelers don't have anyone on the roster to directly replace him or Hargrave, it's easier to find someone to play nose tackle -- Alualu has even lined up there in the past -- than it is an edge rusher capable of double digits in sacks.