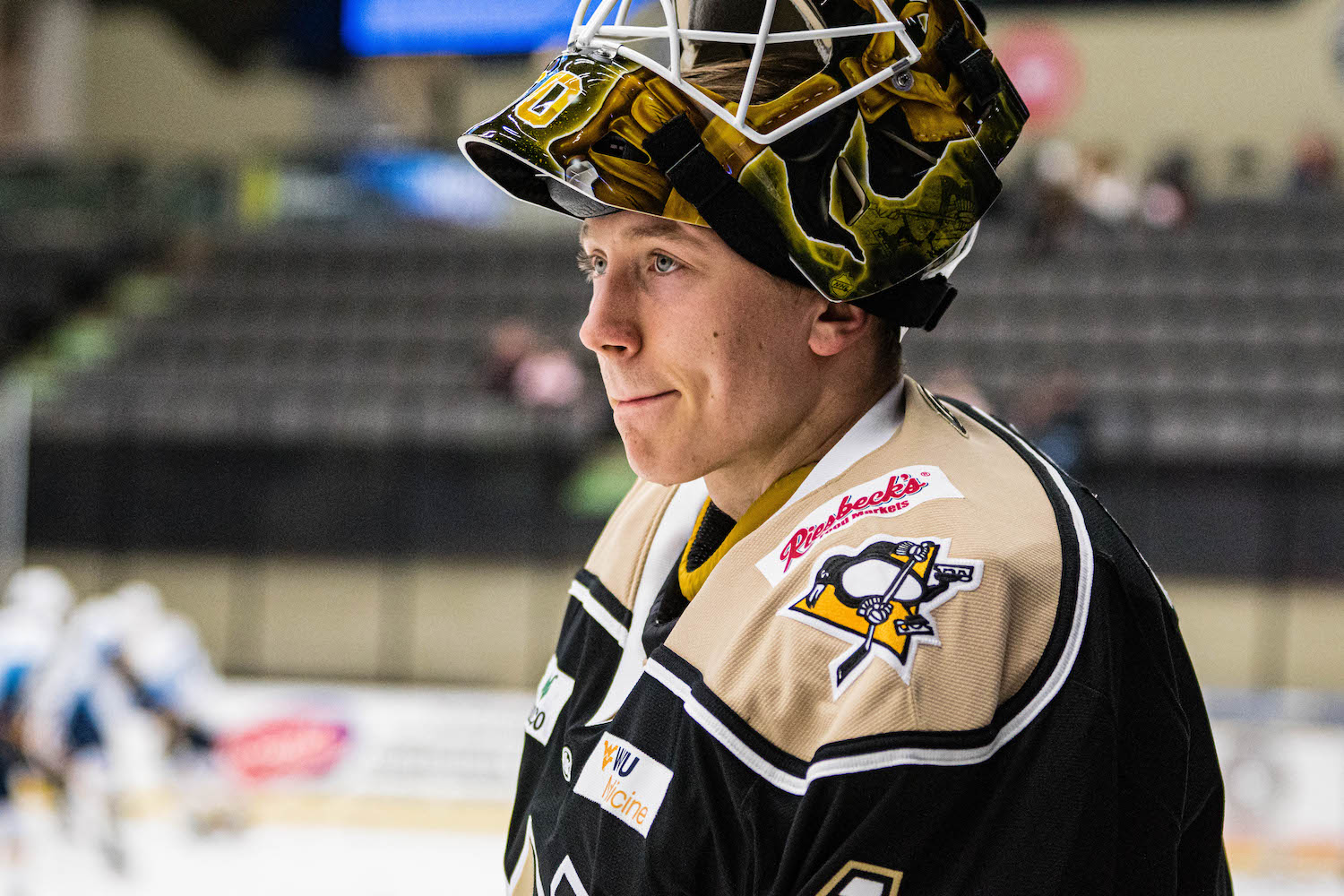 Emil Larmi had a crazy couple of days recently.

The Penguins' 23-year-old goaltending prospect was on a bus with the Wheeling Nailers heading to Cincinnati on Friday when he got the call straight to the NHL to back up Matt Murray in Montreal after Tristan Jarry was left back in Pittsburgh to rest and Casey DeSmith couldn't make the trip due to a lost passport.

"We were on the bus, I was supposed to play on Friday with the Nailers," Larmi recalled to me this week. "The coach came and asked me if I had my passport with me."

"The coach came back after and said, 'OK, you got your passport? You're going to Montreal tomorrow,' " Larmi said. "I checked the schedule and saw Pittsburgh was playing in Montreal, and was like, 'Oh, all right. I'm in, I can do this.' "

Larmi recalled being confused, because earlier that day he had read that DeSmith was getting recalled to Pittsburgh. He figured he'd get a call up to Wilkes-Barre/Scranton in DeSmith's place.

"I think this was a nicer option," he laughed.

DeSmith realized he didn't have his passport early on Friday, and played in Friday's game with Wilkes-Barre. Larmi was held out of the Nailers' game in Cincinnati that day, and finally spoke to DeSmith afterward to learn why he was getting the call instead.

Larmi said he woke up at 4 a.m. the next day to get to the airport and fly to Montreal the day of the game.

"It was a bit different," he laughed. "One day I'm riding the bus, then next I'm on a first-class plane. Then I'm at the Bell Centre, and after that I'm flying with the team on a private jet. The hotel was nice as well, I wasn't complaining about that."

Of all places for Larmi to get this experience, it probably couldn't have happened anywhere better than Montreal. It was Larmi's first time in Canada, and he quickly realized how different Montreal was from the minor-league towns he's been playing in since moving to North America this summer

"I'd say it's a real hockey town," he said with a laugh. "When I landed to pick up my gear at the airport, someone came to talk to me and tell me good luck. My driver was excited for me too. Everyone there either plays hockey or watches hockey. I never played in front of as many people as we had watching our warmups. There was like, 20,000 people watching warmups already. I tried to enjoy it."

Larmi wasn't on an NHL roster very long, but he tried to make the most of his time and learn from how the NHL players go about their day on a game day.

For Larmi's services, he got his NHL salary for one day, equal to $4,261, plus the hefty NHL per diem allowance. That's a step up from his minor-league salary of $376 for every day he's on a minor league roster, in the AHL or ECHL.

"Yeah, that was the fun part," Larmi laughed when talking about the bump in pay.

And just to be clear, no, Larmi didn't swipe DeSmith's passport.

Larmi made it back to Wheeling early on Sunday, and started in that afternoon's game, capping off a wild few days.

Larmi is in Wheeling on what is essentially a conditioning stint, although it doesn't get labeled that at this level. He missed nearly a month earlier in the season with a health scare, and with Larmi and Dustin Tokarski sharing the backup role in Wilkes-Barre, the infrequent starts made it difficult to Larmi to find his footing again.

"Not even putting your gear on for some games, it's been tough," Larmi said. "Casey and Tokarski have been so good. It's unreal. I haven't been that good. It makes sense, and I'm not mad at anyone."

Larmi was first assigned to Wheeling during a time when Alex D'Orio was hurt, so he was able to get frequent starts without taking time away from anyone else.

Before getting the call to the NHL, Larmi posted a 3-1 record in four starts, with a 1.51 goals-against average and a .959 save percentage, including a 26-save shutout in his first game.

"I like to play," Larmi said. "That's the big thing. Of course, the quality of the game (in the ECHL) isn't that good, so it's different. But it's still good to play. It's not easy to go there and play there when you want to play in (the AHL). But it's been good to play a couple of good games and play hockey."

While this stint is good for Larmi to get back into form physically after missing so much time, the mental side of the game, regaining confidence, is much more important.

"I think that was the biggest problem for me, coming back from injury," he said. "I really lost my game. When I played those couple of games (in Wilkes-Barre), it wasn't me. But in Wheeling, in practice, I can have my own net, I can take a lot of shots, I can play a lot. Now I found my game, I'm enjoying to play hockey again. I know what I'm doing and I'm trusting myself."

• Center Cam Brown was named to the ECHL All-Star game, the league announced on Monday. Brown, 26, has eight goals and 16 assists in 34 games. The game will be hosted by the Wichita Thunder on Wednesday, Jan. 22 at 7 p.m. CT.

Four divisions will compete in a three-on-three tournament. The skills competition will take place in between rounds of the tournament, with results counting towards the cumulative score.

Three members of the 2018 U.S. Olympic Gold Medal team – Dani Cameranesi, Kali Flanagan and Gigi Marvin – along with three-time World Championship medalist Annie Pankowski, will be added to the rosters and will compete in the actual games and the skills competition.

Hawkins led with four shots on goal as the Nailers were outshot, 18-35.

D'Orio took the win in his return from injury with 34 saves on 35 shots.

The Nailers went 1-for-5 on the power play and 3-for-3 on the penalty kill.

• Jan. 4: at Cincinnati, 4-0 loss
The Cyclones scored twice in the first period -- including a power play goal -- and twice in the second period to earn the win.

Nick Minerva led with three shots on goal as the Nailers were outshot 50-21.

Jordan Ruby took the loss with 46 saves on 50 shots.

The Nailers went 0-for-4 on the power play and 4-for-5 on the penalty kill.

The Walleye scored twice in the first period. They extended that lead to 3-0 midway through the second period with a shorthanded goal. The Nailers answered just over a minute later with Alec Butcher's ninth goal of the season.

The Toledo scored two shorthanded goals on the same penalty to open the third period and extend their lead to 5-1. Three minutes later they made it 6-1, and Larmi was pulled and D'Orio entered the game. The Walleye scored twice more -- including a power play goal -- to seal the win.

Chris Brown led the Nailers in shots with four as they were outshot, 38-27.

The Nailers went 0-for-4 on the power play, and allowed three shorthanded goals. The penalty kill went 2-for-3.

• The Nailers’ record of 16-14-4 has them sitting in fourth place in the six-team Central Division, 12 points out of first place.

Hawkins ripped this shot in overtime:

The Cylcones had a dollar beer night when the Nailers were in town, and fans built a pretty substantial beer can pyramid along the glass ... although it didn't last very long:

down goes the beer can pyramid in Cincinnati pic.twitter.com/y7weDtmOwJ