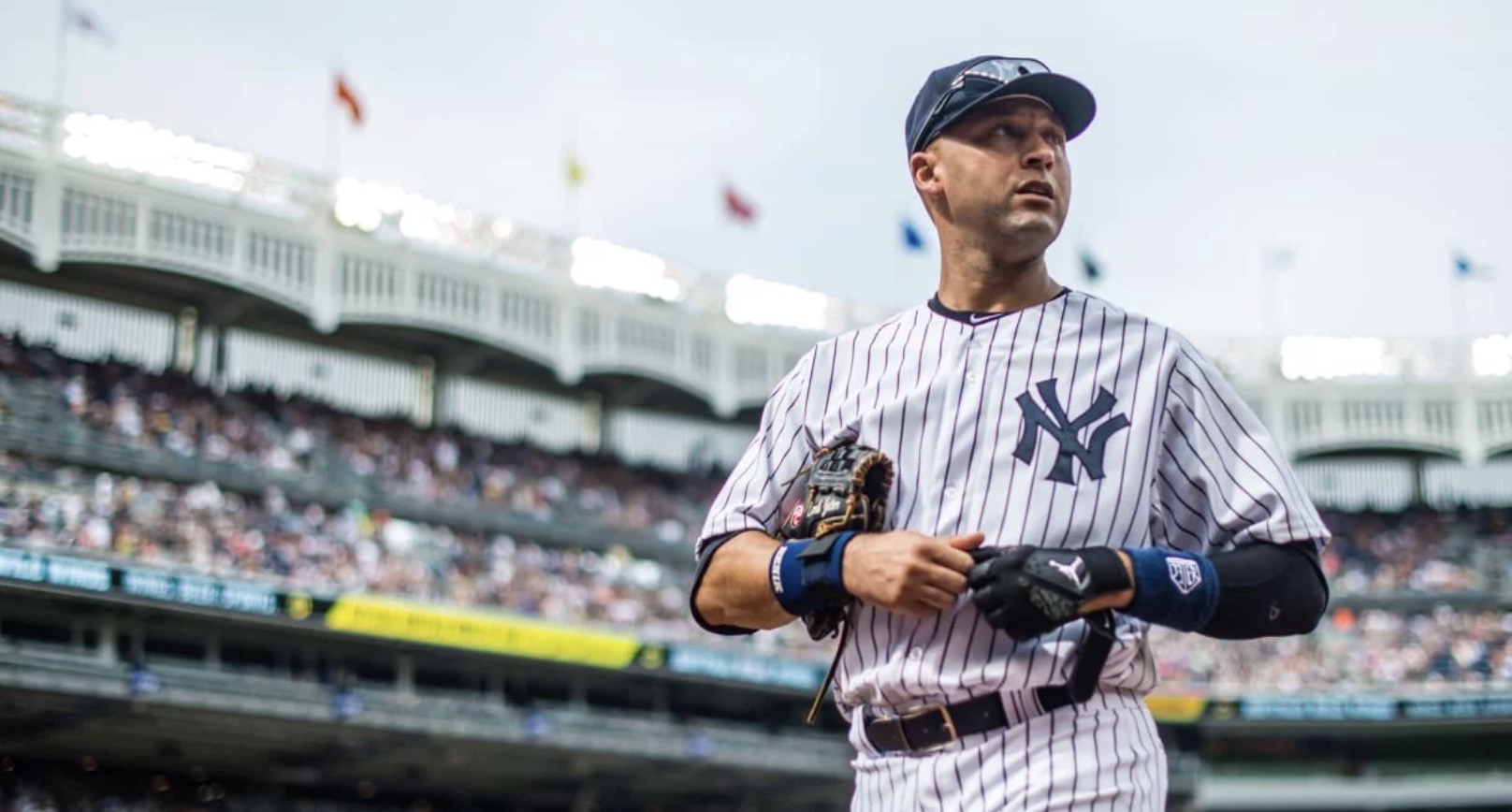 The problem with Mariano Rivera having been the Baseball Hall of Fame's first unanimous selection a year ago is that he's set the new standard for encouraging homogenized voting.

Yeah, I voted for Rivera, too. He was an easy choice.

And I've voted for Derek Jeter toward the coming class, as well, as I'll detail below with the full release of my ballot.

But that doesn't stop me from finding a broader discussion increasingly distasteful, the one that treats vote count as meaningful toward a person's election. Because it isn't. And it never was. And it never should be.

No. And none of those other members was a unanimous selection.

Wow, no. Not bleeping close. But you can bet the same outcry will come if he doesn't match his uniform number and become No. 2 with that distinction, alongside his fellow Yankee.

In 1973, when the Baseball Writers Association of America waived the mandatory five-year waiting period and called a special election following Roberto Clemente's tragic death, exactly 31 of the 424 voters left him off their ballot. Despite everything Clemente had achieved as a player. Despite the overwhelming emotion of the time. Despite a special election being called.

That outcome, my friends, is the real standard of an extraordinary election. There's never been another like it.

And yet, that outcome, meaning how that Clemente vote turned out, remains just fine by me.

Yeah, he got in. He was elected.

When a visitor approaches the Clemente exhibit and plaque in Cooperstown, N.Y., they won't see any mention of a vote count. Nor should they. Because all that matters is whether or not he was deemed worthy of the ultimate honor for a player. And he absolutely was. In a way that no one before or since has been honored, as a matter of fact.

Were the people who didn't vote for Clemente idiots or weirdos?

But did they deserve to have their votes taken away or to be flogged in the public square, as the common cries come now on social media?

Because this isn't some poll or survey. It's an actual election, with only two outcomes: Win or lose. Get 75 percent of the vote or don't. And a lot like actual elections, it's ideally rooted in democracy, meaning qualified voters are free to choose as they please. Even in our presidential elections, out of 300 million people, you’ll have citizens cast write-in votes for Mickey Mouse, SpongeBob SquarePants, Hitler, Stalin, their pets, you name it. And it doesn’t matter. It doesn’t impact that there's ultimately just a winner and a loser.

Again, I voted for Jeter. But, as was the case with Rivera, a small part of me hopes there's at least one nutjob somewhere in the BBWAA who doesn't, if only to infuriate those people who expect all votes to fall tidily in line with their own thoughts.

I write it in this column every year, and I'll do it again: The Baseball Hall voting is by far the best in professional sports, if only because it's infinitely more open than those in football or hockey, which are conducted by closed committee. The baseball writers who have votes have almost always disclosed their votes, and now the BBWAA, seeking even greater transparency, now publishes all of our votes, including those for annual individual honors, on our association’s official site.

As a result, naturally, the nitpicking has gone berserk. And that, I think, makes it awfully unfair to truly great talents such as Rivera and Jeter that this unanimity ever becomes a public issue, even as it's unfair that voters should ever feel pressured to vote in any direction and, I dare say, that some voters can and are unconscionably swayed by it.

The system works. It’s unsightly at times, but that’s only because everyone can actually see it.

Before continuing on to further ranting, here are the selections I made for the pending class before the Hall’s Dec. 31 deadline:

Jeter doesn’t need my testimonial. There'll be plenty enough of that coming out of New York, where the clutch narrative -- rightly beaten down for decades by advanced analytics -- remains as vibrant in the media there as it was back when Reggie Jackson only homered in October. They still soak up that stuff, and no one in recent memory delivered more of it than Jeter.

To his credit, I might add. Legit great player. Just saying that it's been magnified many times over.

Schilling's my lone holdover and, as ever, is a strange case worth retelling.

I voted for him in 2016, as his baseball credentials clearly warrant that. But he went so far beyond the pale with some remarks and actions after that — look them up, this guy isn’t worth my time — that I felt he crossed into foul territory of the character section of the qualifications. That’s obviously subjective. Someone else might see it differently. But again, that’s why there are a lot of us doing this voting.

At any rate, Schilling hasn’t caused any stir since then, and he's been back on my ballot two years in a row.

I’m allowed to still hope he gets a flat tire on the way to the ceremony, right?

Walker's on the Hall ballot for the 10th and final time, and he's on my ballot for the first time. And anytime that happens, I feel it warrants an explanation, since it's not as if he went out and tore it up at Coors Field this past summer.

I've studied Walker's case for years and, like most voters, came away respectful of the basics of his career -- .313 batting average, 383 home runs, 1,311 RBIs -- but never blown away. And yeah, that's partly because of the Coors effect, which inflates everyone's offensive numbers across the board, not just home runs. Apparently, I've had plenty of company: In 2014, his vote total bottomed out at 10.2 percent, when 18 other players received more votes.

But time passes, context changes, and a really down class this year combined with Walker's final year of eligibility to inspire one last look. Within that, I read analytical arguments rooted mostly in his 141 OPS+ and 72.7 WAR. I gave greater weight to his seven Gold Gloves, a stunning achievement that, as long as we're citing the Coors factor, is all the more impressive. I recalled personal experience from having watched his full career, 1989-2005, as one of the Pirates' opponents in the National League. I re-read about the role he played in the old Montreal Expos' should've-been-a-championship season in 1994. I heard Clint Hurdle speak of how Walker was "the smartest baserunner I've ever seen." I also was contacted by the Canadian Baseball Hall of Fame, where he's already honored, and learned of his role in inspiring kids north of the border.

Oh, and this, too: From 1997-2002, that period now known as the Steroids Era by most baseball historians, the top five players in OPS+ were, in order, Barry Bonds, Mark McGwire, Manny Ramirez, Jason Giambi, Jim Thome and Walker, followed by Edgar Martinez, for whom I voted.

All of those players except Thome, Walker and Martinez were known cheaters. Which solidifies a stance for me that Walker ranked among the best legitimate players of his generation.

All of it added up.

From a human standpoint, I'm aware Walker is now widely seen as this close to selection. So my thinking flips from whether he's worthy to whether or not I feel strongly enough to cast a vote to keep him out, if that makes sense.

I hope he makes it.

For anyone new to this site, here are the three standards for voting I’ve set for myself that I've shared with each of my four ballots to date:

1. The research I’ve committed to this was almost entirely my own. I studied my own finalists’ histories in as many forms as I could find, from old stats to new, from major achievements to memorable impact.

2. The approaches to difficult decisions were based on a combined goal of careful thought, consistent applications of my own precedents, but also an open mind to conceding when I might have been wrong.

3. The guidelines I’ve followed are those outlined for us by the BBWAA, which also happen to be the very same guidelines the Hall wrote for the very first class in 1936. And you'd better believe that includes the character clause, which hasn’t changed over all these years. (If you want to yell at someone about Cobb having been one very bad dude, they’re probably no longer around to hear it.)

Here’s the official clause, by the way, verbatim:

“5. Voting: Voting shall be based upon the player’s record, playing ability, integrity, sportsmanship, character, and contributions to the team(s) on which the player played.”

A few points on the cheaters, since that tends to consume only about 99 percent of all Hall debates:

• When the Hall and/or Major League Baseball decides it wants the voters to stop weighing “integrity, sportsmanship, character,” they can remove that clause. They’re the only ones empowered to do that. Not the writers. Only them.

• It’s become the cool thing in some circles to dismiss PEDs as if they shouldn’t matter to the Hall. Which is nonsense. Cheating is cheating. It runs counter to the very fabric of sportsmanship, and thus, sport.

• It’s become equally cool to bash the BBWAA for acting as holier-than-thou or judge, jury and executioner. This also is nonsense, for the reason I just outlined and for the fact the Hall and MLB are all too happy to pass the buck to the writers. They keep out the players they don’t want in the Hall, and we get the grief.

Which, to be totally honest, is fine by me. I’ll follow the guidelines precisely as written and weigh “integrity, sportsmanship, character,” with an inclusion of those connected to PEDs, because cheating the public, your peers and the game doesn’t exactly fit any of those three traits.

In other words, I’ll vote for Bonds and his ilk only when the guideline is changed by the Hall and/or MLB. But I’m not holding my breath. To repeat, they don’t want Bonds in the Hall. Unless, of course, they can explain why the former commissioner essentially refused to acknowledge Bonds breaking the most hallowed record in our nation’s long sporting history.

Anyway, no need to end this on a down note. The Hall itself and America’s pastime as a whole should be celebrated, and I extend best wishes to all three of the gentlemen above. The results will be announced Tuesday, Jan. 21, 2020, at 6 p.m. on MLB Network.