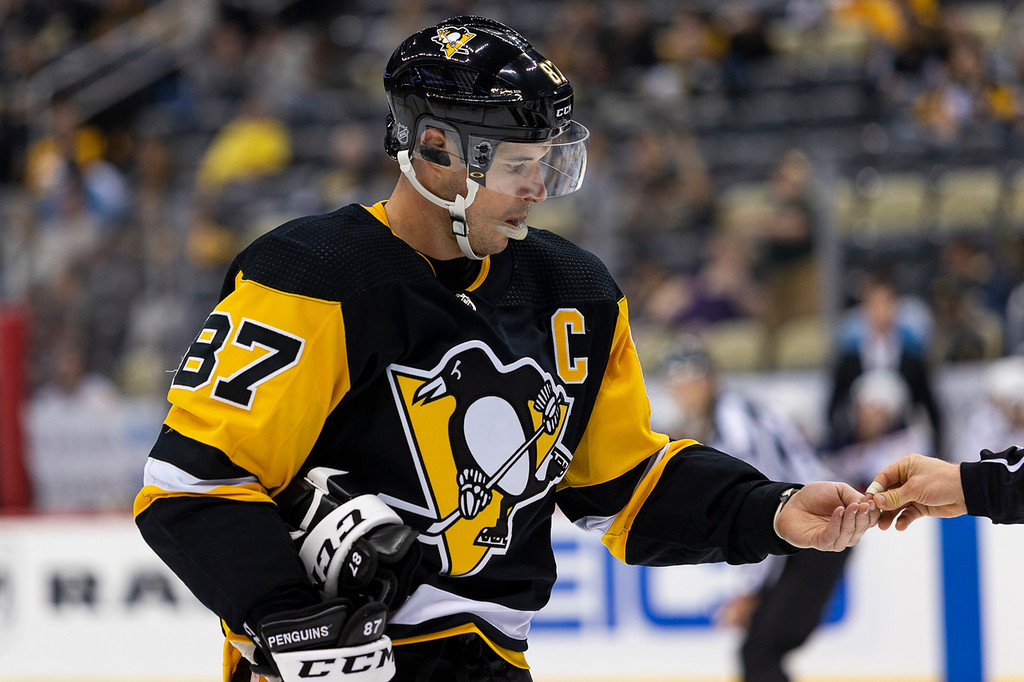 SCOTTSDALE, Ariz. -- Sidney Crosby did a drill with Jared McCann or Dominik Simon on his left side, Patric Hornqvist on his right.

He worked on the No. 1 power play unit with Kris Letang, Evgeni Malkin, Bryan Rust and Hornqvist.

He stayed on the ice at the Ice Den -- so named, apparently, because frostbite maintains a permanent residence there -- long after the Penguins' formal workout Saturday afternoon had ended, working on various aspects of his game.

Crosby looked, in short, like a guy intent on returning to the lineup very soon.

Which, Crosby readily acknowledged afterward, he is.

His next opportunity to do that will be Sunday, when the Penguins will face the Coyotes at Gila River Arena at 6:08 p.m. And while it's far from certain that Crosby, who has been recovering from surgery to repair a sports hernia, will play against Arizona, neither he nor Mike Sullivan would rule out the possibility after Saturday's practice.

"I haven't ruled (out) anything, but I haven't really discussed it much," Crosby said.

He added that he had "no idea" what would have to happen for him to be in uniform Sunday, before saying that seeing how he felt in the wake of Saturday's workout would be the first step.

Sullivan said that Crosby "obviously had another strong day today" and would not commit to giving him a day off Sunday.

"We're not ruling out anything," Sullivan said. "We're just going to take each day as it comes."

Crosby hasn't played since mid-November, but the long layoff wasn't evident during practice. He moved around the ice at high speed and stuck shots under the crossbar and inside the posts with his usual regularity.

Sullivan noticed all of that, and something more about having Crosby involved.

"When he practices, it's amazing, the influence he has on our team," he said. "The pace of the practice just elevates significantly. That's a credit to how hard he works and his practice habits. It's contagious among our group."

The Penguins are 17-6-4 in the 27 games Crosby has missed, so his injury obviously hasn't sabotaged their season. He was quick, however, to dispel the notion that he might be tempted to take extra time off to make certain that he is fully recovered.

"I don't think I ever take my time," he said. "But as far as the team playing well, it's been pretty great to watch."

Crosby's time as an onlooker nearly was extended early in practice, when a Hornqvist shot from the left side of the ice grazed the crossbar and struck Crosby, who was standing along the far boards, on the visor and on the front of his helmet.

A few inches lower, and it could have been pretty bloody.

"The hockey gods don't want me in the lineup right now, I guess," Crosby said, smiling. "I'm glad it didn't get me in the head. ... I didn't get it in the face and I'm here to talk about it and laugh about it."

This is not the first issue that's forced Crosby from the lineup for a long stretch, so he's aware that regaining his timing will be an early challenge when he gets back into games.

"Everything seems to happen pretty quick out there," he said. "When you're playing games, the games seem to slow down a little bit. When you've missed an extended period of time ... plays seem to develop a little quicker."

The Arizona game is the first of six in 10 days (in five cities), which means that if Crosby is back before the all-star break -- that's his stated intention -- he'll take on a heavy workload almost immediately.

That, he said, would not be an issue for him.

"Either you're ready or you're not," Crosby said. "When you're ready, you're ready to handle that. ... Coming back, regardless of the schedule, I'll be ready."

• Crosby cited McCann's speed as something that helps their games to jell, but that's not the only thing about him that has made a favorable impression. "He shoots the puck a lot," Crosby said. "And with a shot like that, he should."

• Center Nick Bjugstad and defenseman Justin Schultz, both of whom are recovering from injuries, worked out on the ice after their teammates practices. "They're obviously not ready to join the team, but they're making progress," Sullivan said.

• Here were the Penguins' personnel combinations during their workout: