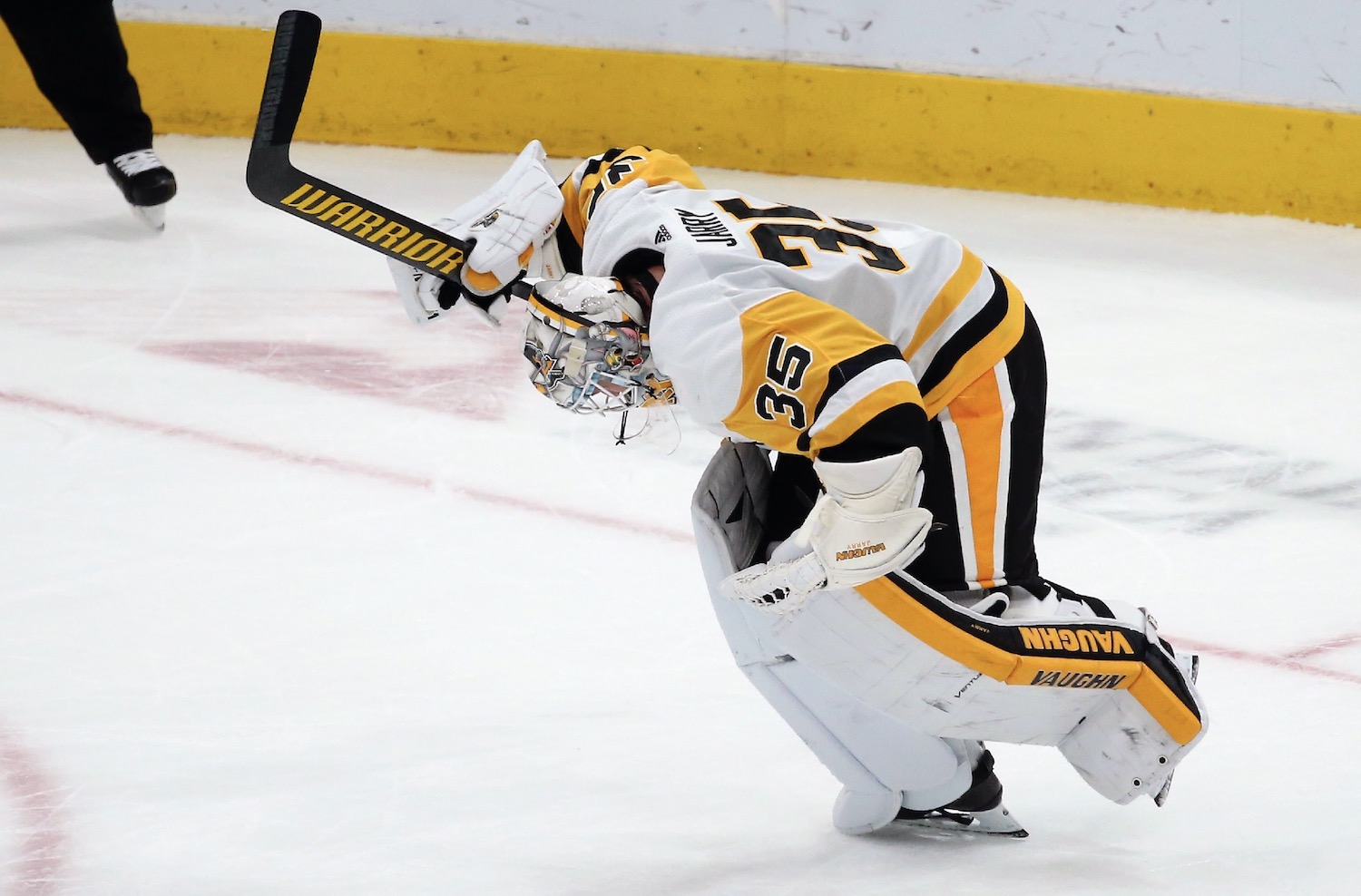 GLENDALE, Ariz. -- This was not, Teddy Blueger said, completely uncharted territory for him.

Hey, he'd been in a shootout or two before.

Literally. One or two.

More than a year ago.

"I think I maybe had one or two tries last year in Wilkes-Barre," Blueger said. "Early on in the year. So it's not something I'm used to, for sure."

Perhaps that wasn't a bad thing, considering how many guys with lots of shootout experience tried -- and failed -- to score before he got his chance Sunday evening at Gila River Arena.

To be sure, Blueger was not the obvious choice entering the shootout to score the goal that would give the Penguins a 4-3 victory against the Coyotes -- and a sweep of their three-game Western road trip -- if only because there was little reason to think it would last long enough for the shooting rotation to reach him.

Seven teammates went before him; all but Bryan Rust failed to get a puck past Arizona goalie Adin Hill.

So when Mike Sullivan had to pick shooter No. 8, he opted for Blueger, perhaps because some obscure rule wouldn't have allowed him to have Tristan Jarry, renowned for his puck-handling skills and with a minor-league goal on his resume, to try to score the deciding goal when he wasn't preventing the Coyotes from doing it.

Never mind that Blueger's shootout history could have been detailed on a 3-by-5 index card.

“It’s hard to predict how long shootouts are going to go," Sullivan said. "They usually don’t go that long, but that was a deep one. When you get down to that part of the bench, there is not a huge body of work to lean on, to say, 'OK, this guy is 40 percent or this guy is 20 percent.' It becomes more about a feel thing.

"We have the numbers on our guys, as far as how they do in the shootouts, percentage-wise, in their careers, in the last one season or last three seasons. We try to use as much science, I guess, as we can to make those decisions, but when you go that deep into a shootout there is no data to go on. It’s more about coach’s feel when we’re behind the bench."

Turned out to be a pretty good hunch he had, even if it took Sullivan seven rounds to get it because Blueger, acting on advice from Evgeni Malkin, responded to his unexpected opportunity by sticking a shot under the crossbar:

"The goal he scored was a great goal, a great shot," Sullivan said. "It's probably appropriate, too, because he's played extremely well on this road trip."

And when Jarry denied Carl Soderberg in Round 8 -- Taylor Hall was the only Arizona shooter to beat him -- the Penguins were assured of taking home all six of the points that were available when they traveled across the country last Monday:

"It was obviously a great trip," Sullivan said. "We knew it was going to be a real tough trip, playing against some real good teams that are playing pretty good hockey. The fact that we were able to take six points out of it is a credit to the team. They're playing hard. Guys are competing out there. We're finding different ways to win. Different guys are stepping up at key times, and we're getting saves."

Jarry made 24 of those in regulation and overtime, before the seven he added during the shootout.

Truth be told, Jarry seems to have plenty of fun every time he plays these days. Which, considering the success he's had, is understandable.

"He's just played such great hockey for us," Sullivan said. "He's making timely saves for us. ... It seemed like it was a goaltenders duel there in the shootout, and Tristan made that one extra save for us."

The Penguins have not lost a game in regulation after being tied at the second intermission -- they are 8-0-3 in those situations -- but that record was in jeopardy until Brandon Tanev scored from the inner edge of the right circle at 16:58 of the third to make it 3-3:

"It seems like every time we play Pittsburgh, they've made that play at the end," Arizona coach Rick Tocchet said.

More often than not lately, it's come from a member of the Zach Aston-Reese-Blueger-Tanev line.

"It's good that goals are going in," Blueger said. "Hopefully, we can build on that."

What they're building mostly is a reputation as an excellent No. 3 line, capable of regular contributions all over the ice.

This was not, by any means, the Penguins' finest performance of the season. Not when they were credited with all of two shots in the opening period.

They did, however, find a way to squeeze out a victory, as they have done so many other times in 2019-20.

"It was not pretty," Malkin said. "But we played hard."

Hard enough to stretch the game to a point where Blueger got his opportunity to end it.

Which meant they didn't have to call on Jarry to be a difference-maker at the other end of the ice, too.

"We have some pretty good guys who are good in the shootout," Jarry said. "It took a couple more (rounds) than we expected tonight, but it's good that we're able to go down the line and we have guys we're able to put out there."

Even if it's a guy who hasn't done it for more than a year.