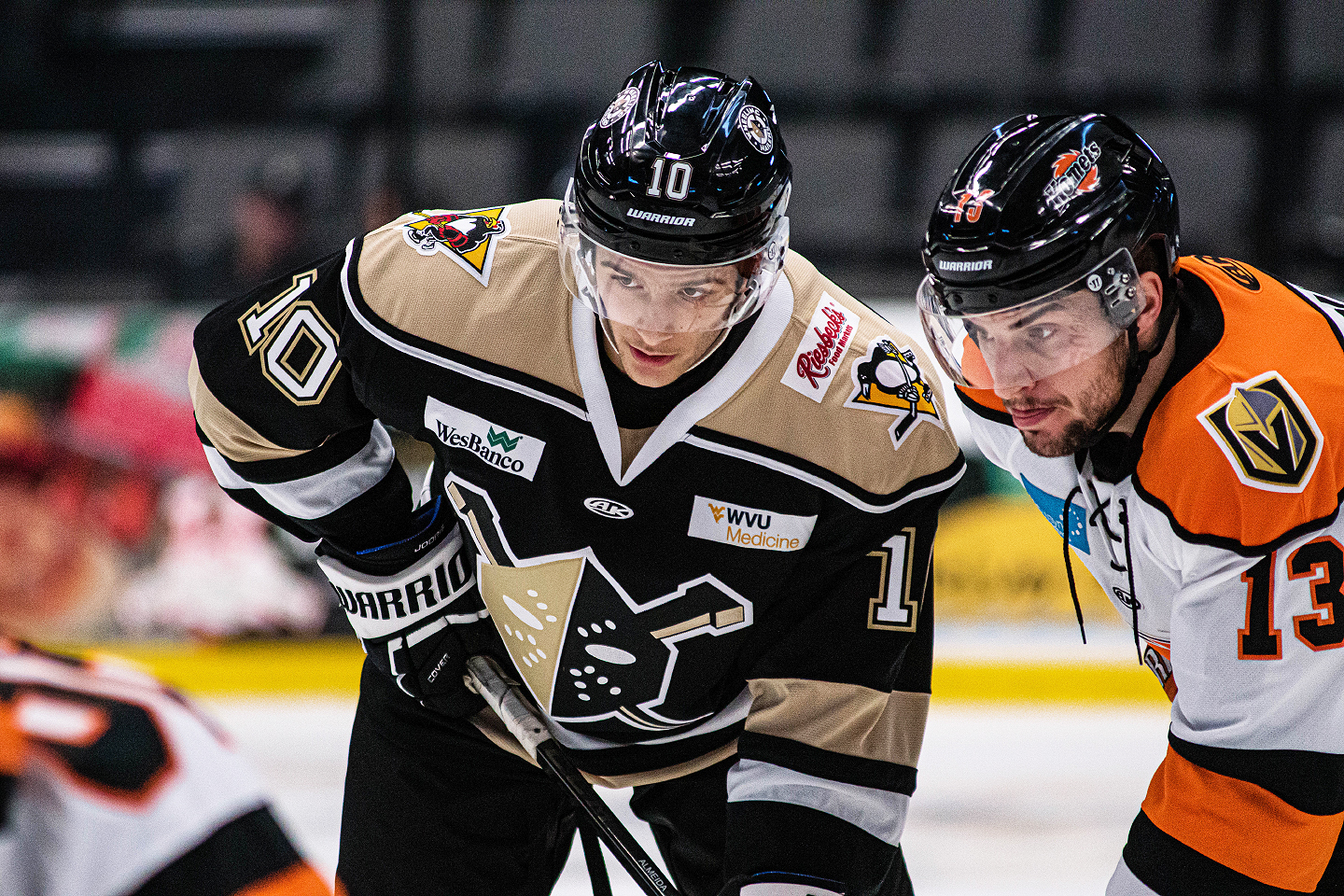 Forward prospect Justin Almeida is gaining confidence while playing with the Nailers to start his pro career.

Almeida, 20, didn't have an ideal start to his pro career. After undergoing shoulder surgery in the offseason, he was still rehabbing without contact all through Pittsburgh's training camp. He was cleared to play during Wilkes-Barre/Scranton's training camp, but wasn't able to get regular playing time in a top-six role. Through Wilkes-Barre's first 19 games of the season, he was scratched 12 times.

That's not an easy way to get acclimated to the pro game, especially after his limited training camp.

"Missing training camp and the rookie camps and all that, that slowed my development a little bit compared to some other guys," Almeida told me this week. "Playing infrequently is tough. But the goal is to be there, so I'm trying to make my way back."

On Nov. 25, the Penguins assigned Almeida, their fifth-round pick in 2018, to Wheeling in the ECHL so he'd finally be able to earn the playing time he needs.

"It's nice being able to play constantly," Almeida said of his mindset after being reassigned. "I definitely think that helps the confidence. You get to get used to playing pro hockey. That's a benefit, you can develop your game a lot better. My goal is to be in Wilkes, but I'm using this as a good development stage."

While Almeida is in Wheeling, he's still in close communication with management. Penguins front office staff like director of player development Scott Young and Wilkes-Barre assistant general manager Erik Heasley visit Nailers games and stay in contact with the prospects at that level.

"They keep a good eye on everybody down here," Almeida said. "There's good communication between everybody. It's good feedback here."

Going from playing seven games in a little under two months to the grind of the ECHL schedule was an adjustment. ECHL teams often play three games in three days, and only run three forward lines. That means that a guy like Almeida, joining the Nailers on the top line, is going to be tasked with playing somewhere around 25 minutes a night.

"It was definitely a change, playing a lot of minutes all of the sudden," Almeida said. "But it's nice, you get to try things on the ice and develop, and you're always put back out on the ice. It took a little bit to get used to playing that much."

When I spoke to the 5-foot-8, 170-pound Almeida early on in the AHL season, he said his biggest takeaway of the differences from juniors to the pro game is just the quickness of the game. Everything is faster. Players move faster, and decisions have to be made faster. Now that Almeida is able to play regularly, he's been able to better adjust to the speed.

"Playing more and getting used to the hockey, you get more comfortable and get used to the pace of the game," he said. "Each game, each shift, I'm getting more used to that."

Almeida's comfort with the pace is evident, and he's seeing success at the ECHL level. He got off to a bit of a slow start, and was scoreless in his first three games with Wheeling, but he's now recorded two goals and seven assists through his 20 games there. On his first goal on Dec. 1 against Toledo, he showed some of that quick decision making:

It shouldn't be long before Almeida finds himself back in Wilkes-Barre.

• With Wilkes-Barre/Scranton leaving for a 10-day road trip on Tuesday, they recalled goaltender Emil Larmi on Monday.

• On Saturday the Nailers welcomed the 3,000,000th fan in franchise history.

We welcomed our 3 millionth fan tonight 🎊 thank you to all of our fans for all of the support! We couldn’t do it without you! #NailCity⚒ pic.twitter.com/shhA8ZE50O

• Jan. 10: at Reading, 5-2 loss
The Royals scored twice in the first period, including one power play goal, to carry a 2-0 lead into first intermission.

The Royals extended the lead to 3-0 at 2:33 of the second frame, and Graham Knott answered 1:09 later with his sixth of the year to get the Nailers on the board. Alec Butcher scored a shorthanded goal, his 10th of the year, to cut the Royals' lead to one goal.

The Royals scored two empty net goals in the third period to seal the win.

The Nailers went 1-for-3 on the power play and 3-for-4 on the penalty kill.

• Jan. 11: vs. Fort Wayne, 6-1 loss
The Komets opened the game with a power play goal 2:50 into the game, and scored twice more in the opening frame to take a 3-0 lead into first intermission. They extended that lead to 6-o after a late second-period goal and two late third-period goals, the last of which was a power play.

Yushiroh Hirano broke the Komets' shutout with 26.5 seconds left in the game with a power play goal, his 10th of the year.

Brandon Hawkins led the Nailers with eight shots on goal as they outshot the Komets 39-34.

Larmi took the win with an incredible 47 saves on 48 shots.

The Nailers went 1-for-5 on the power play and 4-for-4 on the penalty kill.

• The Nailers’ record of 17-16-4 has them sitting in fifth place in the six-team Central Division.

Butcher finished this feed from Scarfo:

Hirano picked up a goal on the backhand off of a rebound chance:

Krastenbergs scored on a breakaway: