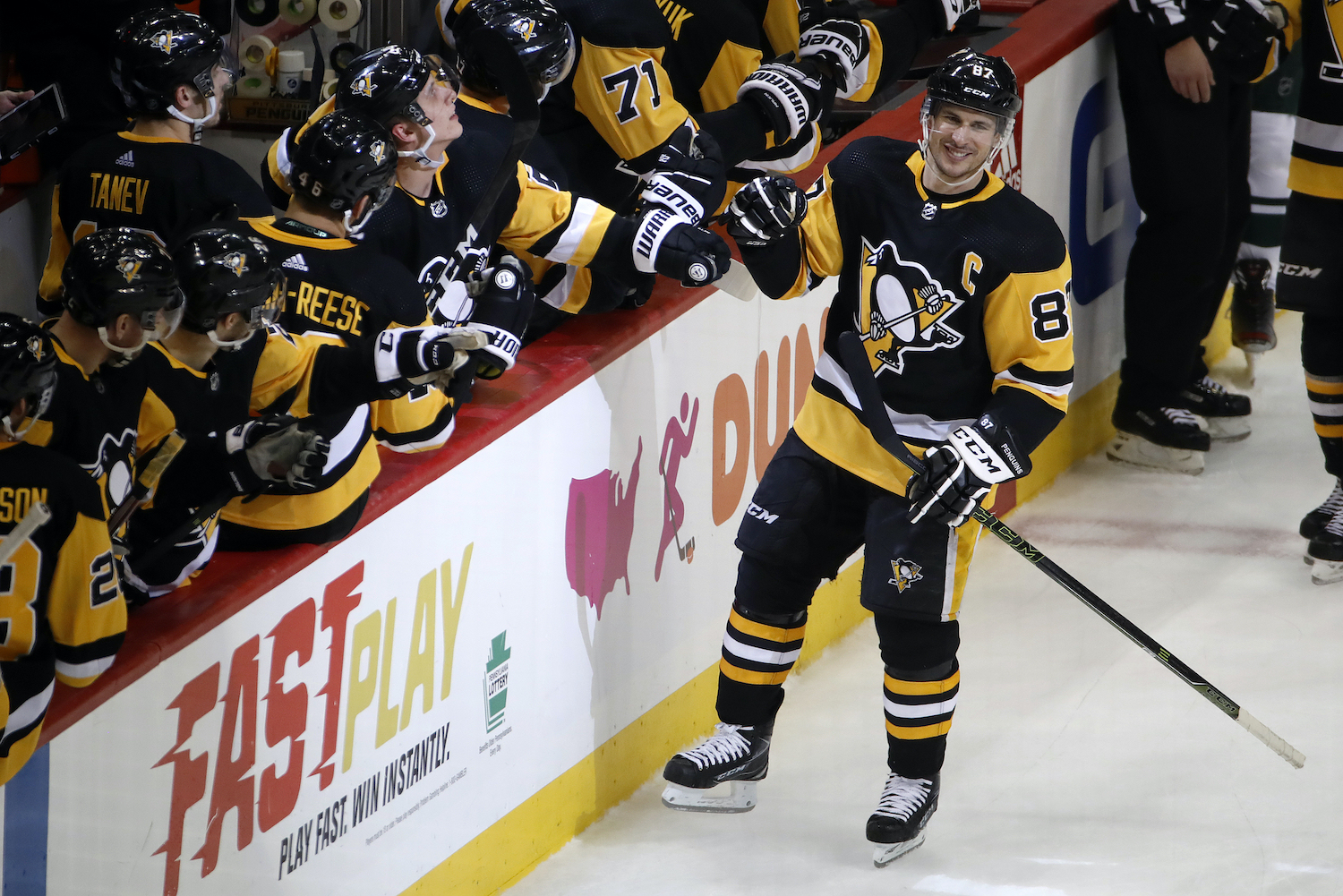 On Monday night, the day before Sidney Crosby made his return to the lineup, I dove into the history of his performances in his first games back after significant injuries.

The results were pretty clear: Crosby has a tendency to have big performances in his returns.

He continued that trend on Tuesday in the Penguins' 7-3 win over the Wild, with a one-goal, three-assist performance while centering the top line between Jared McCann and Dominik Simon. He didn't miss a step after being away from the game for over two months.

"It's fun to compete, with the way we work too," Crosby said of the feeling of being back on the ice. "Just being out there on the bench and seeing it shift after shift, it's a great way to play. Everyone is involved, and I think that's tough for teams to play against."

Crosby picked up the secondary assist on the Penguins' first goal of the game, a power play game from Evgeni Malkin. Crosby carried the puck into the zone to set up the play:

Crosby's second assist was the secondary assist on the Penguins' fourth goal of the game, another power play goal from Malkin. Crosby passed the puck back to the blue like to Kris Letang, who fed it to Malkin:

At 7:41 of the third period, Crosby appeared to try to backhand a pass to an open Simon, but the pass hit Matt Dumba's stick and was redirected into the net:

"He tried to pass that one, it went in for him," Simon laughed when recalling the play.

Crosby's best highlight of the game without a doubt came 39 seconds later, with the play he made for the lone assist on Simon's goal. Crosby carried the puck behind the net while being trailed by Ryan Donato. To evade Donato, he banked the puck off the net to himself, nearly breaking Donato's ankles in the process. All alone behind the net, he sent a centering pass to Simon, who finished the play off:

"I didn't have to call for it," Simon said. "He found me there, it was really nice. It wasn't that hard for me to put it in."

Then he caught himself.

There was no moment in the game where the Penguins appeared to be taking steps to ease Crosby back into regular game action. He led all Penguins forwards in time on ice, with 17:52. That's not a light workload.

"I still had a couple shifts where I felt like they were a little tough," Crosby said of readjusting. "But as far as getting a rhythm, it helps to get on the power play early and get your feet under you a bit. I felt like we did a good job of building off of that."

There was a brief period in the second period where McCann began taking draws, but as Crosby told Dejan after the game, that was more so a strategic move to prevent Wild forwards from getting comfortable with any one center. That's not surprising. At the morning skate, McCann spoke of the benefits of both being able to switch out on draws.

Crosby has played with Simon off-and-on this season and last, and briefly played alongside McCann last season. This was the first time the three have played together, though, and early impressions of the line's chemistry were good.

"It felt good," Simon said of the line. "I think we played hard, focused on a good forecheck, playing with the puck as much as we could. We are happy with our game today for sure."

"Canner was really good," Crosby added. "He got some great chances, uses his speed. Dom was around the net winning battles, so I think we generated chances different ways. That's what we have to do."