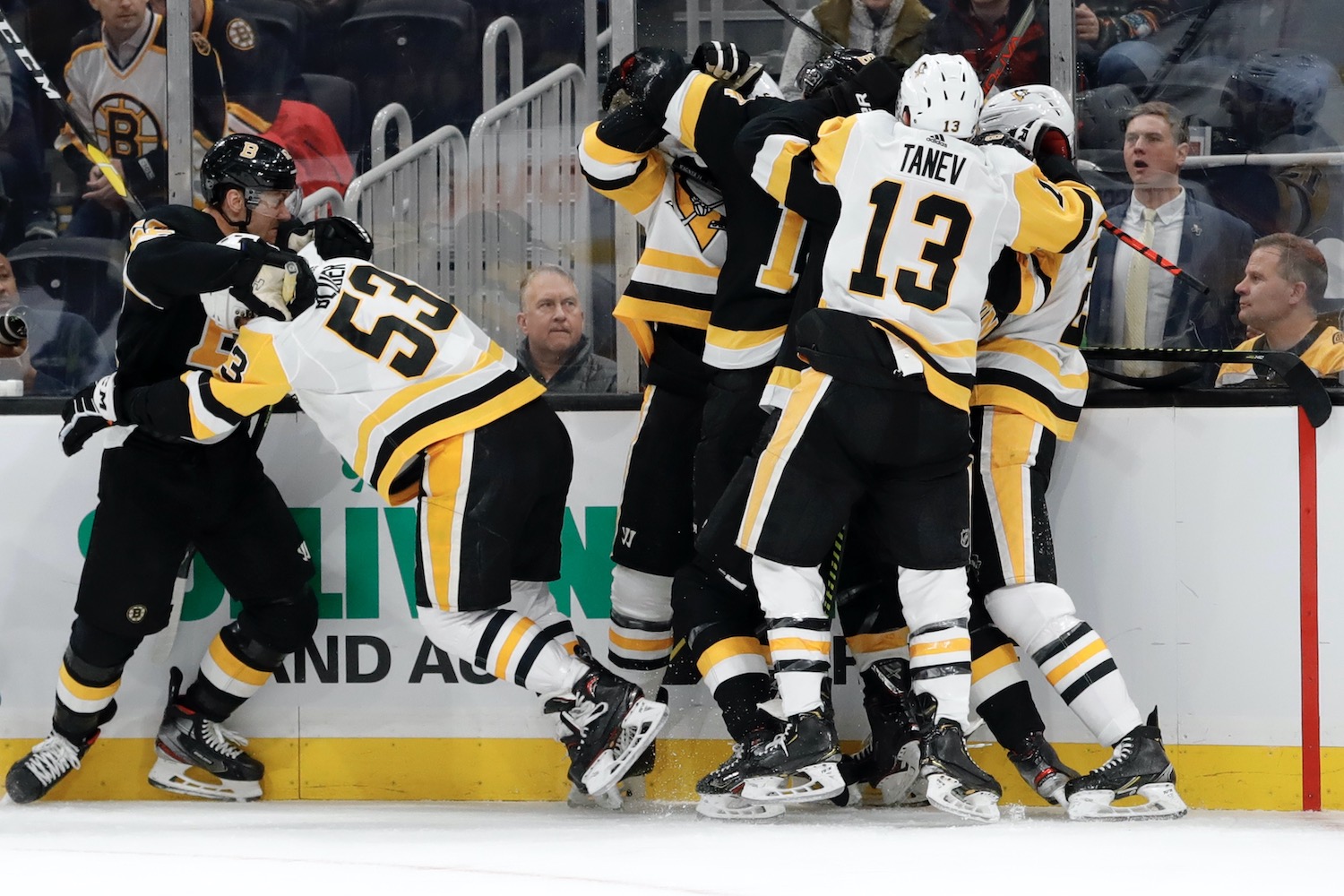 BOSTON -- No, it's not about hits and fights, scraps and scrums and all that other tough stuff.

It's never about that for Mike Sullivan. Nor should it be. His Penguins aren't wired that way, and they absolutely haven't achieved any of their ascent toward the top of the NHL's overall standings that way.

But that sure as hell doesn't mean they aren't physical.

"You can define physicality different ways. You can define toughness different ways," Sullivan would say late Thursday night in an otherwise silent hallway at TD Garden. "For me, the biggest thing is getting your nose over pucks and winning puck battles. That's when I know we're at our best. When our compete level's high, we're winning the puck battles all over the rink."

Right. Which is the polar opposite of all that occurred in this beyond-uncharacteristic 4-1 flattening by the Bruins.

Oh, Boston's players were physical, all right. Fired up, too, after the previous 48 hours had seen them publicly roasted up here for failing to respond to Tuukka Rask getting elbowed in the head by the Blue Jackets' Emil Bemstrom Tuesday night in Columbus. Rask was diagnosed with a concussion, and the dinosaur faction of the fan base and even some in the media called for open violence.

Against an opponent that, of course, had nothing to do with it. But hey.

As Bruce Cassidy, Boston's coach who'd born the brunt of that criticism, would blurt out afterward, "I thought today was a good first step to getting back to who we are."

Whatever the context, the Penguins handled it poorly. And again, not because the Bruins were mean to them. But because they didn't apply their own aforementioned brand to the equation.

To wit, here's the goal that broke the 1-1 tie in the second period:

Try to count, off the top of the head, how many times Marcus Pettersson's been ridden off a puck like that all winter.

Yeah, me neither. But there they were, one after the other, turning what should've been a routine clearance into a casual redirect for Par Lindholm.

I asked Pettersson about this, and he stood tall.

"They outworked us, as a team, and that hasn't happened in a long time," he'd reply, not at all absolving himself. "I mean, we're going to lose games, but we don't want to get outworked. They were first on every puck, sometimes second on the puck. We can't let this slip. We've got to learn from it."

That's small, but small can do damage if left unchecked. Zach Aston-Reese has zero business getting crafty at anyone's blue line. He's on the third line for a reason, and it's his line, along with Blueger and Brandon Tanev, that's set the broader tone more than any other.

Up there ... yikes, that additionally happened to him two other times on this night.

I asked Aston-Reese, and he, too, stood tall.

"We didn't manage the puck well," he'd replay, also not at all absolving himself. "That's something we talked about going into the game, and we didn't stick to our plan. There were a few times we turned it over at their blue line, and they just shoved it down our throat."

This one takes the prize, though:

That's Alex Galchenyuk up there with aimless twirling and the, uh, Herculean effort to take away David Pastrnak's time and space. Which led, in the same swoop, to Patrice Bergeron burying the outcome:

Blame Tristan Jarry for having his heels too far back in the crease -- more on that below -- but the sequence starts with Galchenyuk ... basically not giving a puck.

And you'd better believe I approached Galchenyuk, as well, initially asking how he was attempting to defend Pastrnak, if maybe he'd miscalculated by going too far to the right.

Not to make it about him. Or any of the players I singled out. This one really was an all-the-way pulled-plug stinker, aside from Sidney Crosby, who remained dynamic all night long.

He shook his head.

"There's a lot of details that go into it. We just weren't good enough."

Nope. But again, don't confuse that with not being burly enough. There's zero cause, as I see it, to compare these Penguins to these Bruins, with a vital quartet of the roster still missing. They're currently similar only in the standings. In the same breath, though, there's ample cause to be concerned when the Penguins allow that reality to "slip," to borrow Aston-Reese's term.

No one worked hard, gave more in this one than Patric Hornqvist, even dropping the gloves. But he saw it from the same scope:

Start with this: The Bruins have nine regulation losses in 49 games for a bunch of reasons, among them that they mix speed, skill and being physical as smoothly as anyone. So even without Rask and David Krejci, they were going to be a handful.

Beyond that, though, they performed with an edge, probably for the purpose I described above. Chris Wagner was a runaway train. Zdeno Chara chapped at Evgeni Malkin all night. The Bruins even appeared to target Tanev, in a likely case of diffusing the one player on the Penguins' side most likely to give it back.

"I liked our effort," Cassidy said. "I thought we checked really well against a good offensive team, managed the puck well, got over people. I thought we stuck together physically, tried to play the body when we were supposed to and stuck up for one another if anything happened."

• Wagner, on whether he specifically felt pressure to wreak the havoc he did: “I can take a hint, probably.”

• Crosby on the Bruins: "We've seen that. They're not the first team or the last that's going to try to be physical with us. That's hockey."

• So was this, off Crosby's blade 24 seconds after the opening faceoff:

He's hardly known for his slap shot, but it doesn't mean he hasn't got one. This was like a lefty Guy Lafleur streaking down the wing and simply letting 'er rip.

Which brought about this neat slice of history: 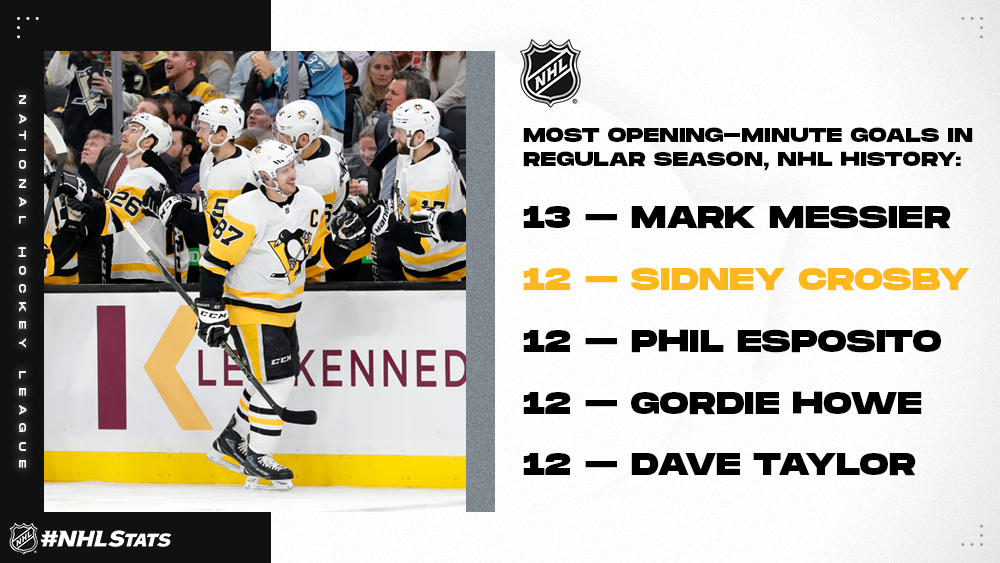 His second game back saw just that point, versus the four against the Wild, but this actually was a more complete showing. He was his team's top performer from front to finish.

• Dominik Simon was second-best. So sharp in both games upon Crosby's return.  But everyone's already in a bad enough mood for me to delve any deeper into that.

• Bryan Rust and Aston-Reese had a two-on-none in the final ticks of the second period, but perennial nemesis Jaroslav Halak stoned Rust then, when Rust whipped the rebound across to Aston-Reese, stoned the latter once, twice, then a third time:

"I think Rusty made the right play," Aston-Reese said. "Usually, goalies will start to cheat there, and he started to. Plus, if he slid the puck over, McAvoy would've gotten a stick on it."

• Jarry's always played deeper in the crease than most goaltenders, trusting his athleticism to bail him out. But that wasn't why he rejected that he was too deep on the Bergeron goal.

"It's tough because Marchand is down there for a back-door pass, and they were making a lot of those," he explained.

Regardless, Jarry's given up three goals in each of his past six games. That's no significant regression, but it's a bit of a comedown from where he'd been.

• Expect Matt Murray to get the net in Detroit, though that'd have been the case, anyway.

Yep, Hornqvist. With the only two of his NHL career, strikingly.

He and Torey Krug mixed it up in the second period, were sent off with coincidentals, then emerged from the box to go the full mile. Hornqvist held his own, got a few rights in, then was spun around to the ice to quash it. A dozen seconds in all.

"It was a hard game, and I think we both were a little frustrated," was all Hornqvist had to say on that. "That happens. That's hockey."

Again, old-time hockey. Very much that kind of night.

And for Cassidy's Bruins:

The Penguins get no breather, flying right out to Detroit after this game for another one Friday. They won't have a skate, but the Red Wings will. Faceoff's at 7:08 p.m. Taylor Haase is there.