Our long-running television ad, now in its fourth year on the air, has shown pretty impressive staying power.

That's thanks to the initial idea, the passion and the professionalism of Thad Christian, Mark Fallone and our great friends at Mount Washington-based Phenomenon Post. A lot went into it, a lot came out of it, and it really represented what we hoped -- and what we still hope -- to convey to people about our venture.

That said, we just made our biggest change to the ad, replacing all the screens with grabs from the coming app/site rather than the current one, as well as adding for the first time Taylor Haase, Chris Carter and Hunter Homistek to that final scene with the iPad.

For those who haven't seen the ad, it airs regularly on AT&T SportsNet, and we've had it in other places, as well, not to mention all our various social media outlets.

My favorite aspect of this version, it shouldn't surprise anyone, was the inclusion of the new app/site elements. Just makes that all feel so much more real.

It was another mostly quiet week in app-land, at least from our perspective, because this is when the underbelly gets built. And the developers don't really need our guidance for that part, so we pretty much sit and wait. 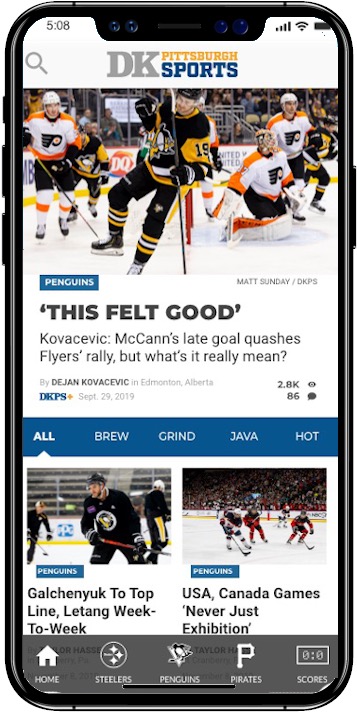 That top-story display up there will stay put, even when one of those five buttons on the blue horizontal bar gets pushed. All that moves in that scenario is what's below the blue bar.

This approach is being taken for a couple reasons:

1. We value our top story. We're first and foremost a news site, and we want whatever's up there to be anchored, to an extent. As you thumb up, it pushes off, obviously. But it sticks while moving across horizontally. It's actually a really neat effect for the user.

2. No matter where you go on the app, we're trying to keep a steady feel, so you always know how to get back. To that end, you'll see up there that the 'ALL' and 'HOME' buttons both get you back. The logo at the very top might do that, too.

The timetable remains aimed at a February beta launch, a March for-real launch.

If anyone missed it, Matt Sunday wrote a letter to readers explaining his current status with us. Sure hope you take a look if you haven't already.

To make this clear here: We aren't hiring a photographer. I appreciate all the outreach this week, but Sunday's our guy. If not today, then hopefully someday again. We've told him that, and we're telling everyone that.

What we're doing, as you might've noticed, is using the wire services. We already were an Associated Press client, and we added Getty this week, too, doubling our options. They don't and can't cover everything we need, but we'll adjust as necessary. In addition, for our file photos, you'll still see a lot of Sunday's work -- and name -- right here.

Or, as I should say, please sponsor my columns, dammit.

No, really, for all the features we've had sponsored here, the columns have never had one. (Not fully, anyway. Tuesday Takes once had a sponsor.) Feels like it'd make a fine business opportunity for someone.

So, before we put that out to the broader public, I'll broach it here one last time: If you think it might fit your business, shoot me an email: DK@DKPittsburghSports.com

As of 11:59 p.m. Saturday, exactly 11 weeks since the announcement that we're bringing back Pitt coverage, we've sold a total of 926 H2P Subscriptions. That includes 27 sold in the past week, which was a slow one.

Here's how to get yours. Let's finish this.