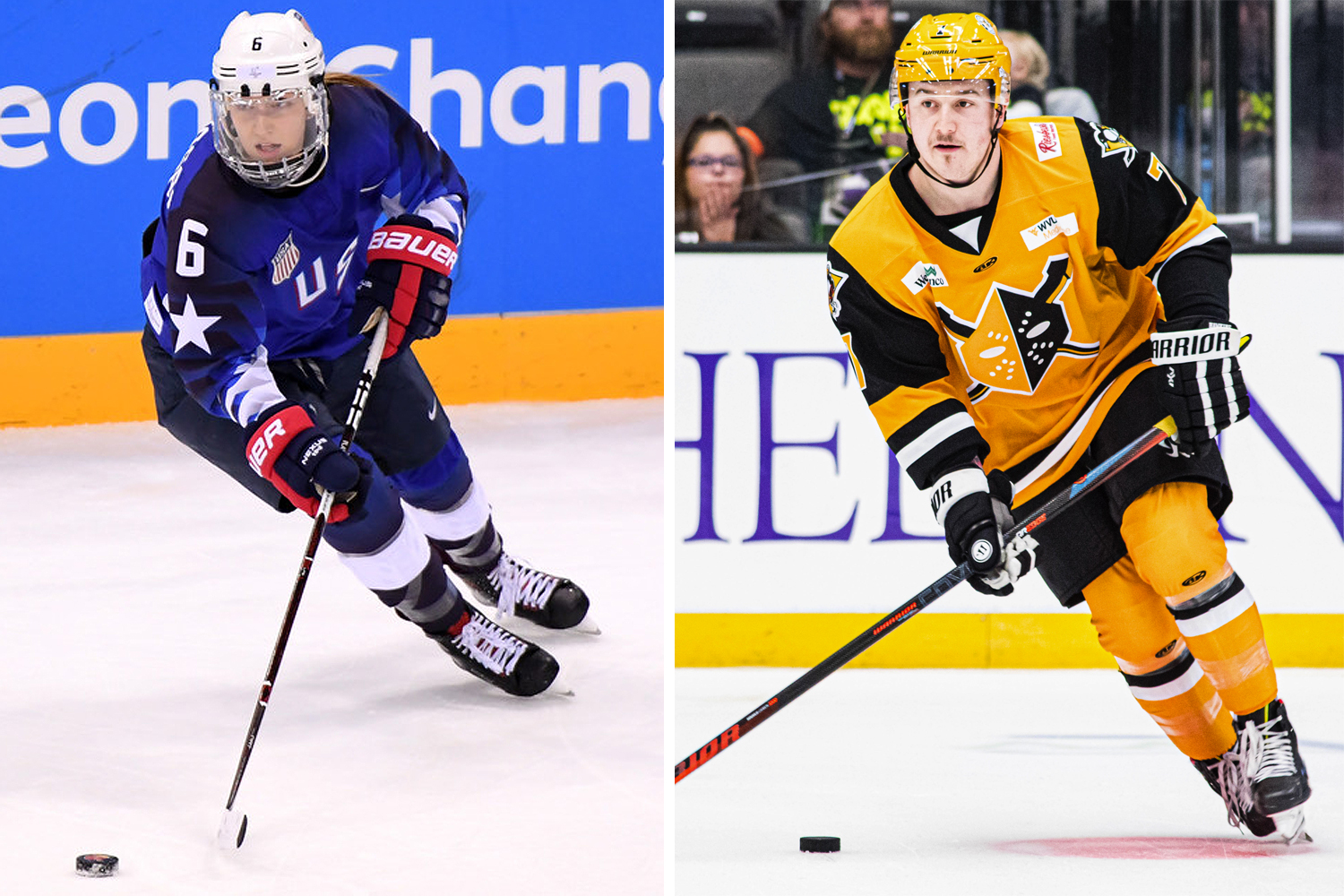 Throughout the first half of this ECHL season, Nailers rookie forward Brandon Hawkins would have been on my short list of possible candidates to represent the Nailers at the 2020 ECHL All-Star Game, being held on Wednesday at the home of the Wichita Thunder.

Hawkins, 25, leads the Nailers in goals (13) and ranks third in points (23) through 33 games this season. Back in November he scored a lacrosse-style Michigan goal that made it onto SportsCenter's Top 10 at No. 2 that night.

The Nailers' representative at the All-Star Game, as voted on by ECHL coaching staffs, captains and media, is another deserving player in Cam Brown, who ranks No. 2 in team scoring with nine goals and 17 assists in 39 games.

Hawkins will still be at the game on Wednesday night, but he won't be playing. He'll be watching his fiancée, U.S. national team defender Kali Flanagan as she plays in the game.

Flanagan, an Olympic gold medalist and a World Championship gold medalist, is one of four American women from the Professional Women's Hockey Player's Association (PWHPA) who will each be added to one of the four ECHL All-Star teams, to compete in the round-robin three-on-three tournament as well as the skills competition events that take place between rounds.

Hawkins couldn't have sounded more excited to be in Wichita to see Flanagan play.

"I couldn't be more proud of her and happy for her," he told me this week. "She's made leaps and bounds for women's hockey, I'm just here to support her as much as I can."

Promoted to Fiancé today 😍❤️ I love you!!

Hawkins and Flanagan met in the summer of 2018, shortly after Flanagan and the U.S. women's team won gold in Pyeongchang. Hawkins was skating at the rink Flanagan's father owns, and admitted to being a little starstruck by her. So, he broke the ice with a chirp.

"I have a tattoo of a pylon that says 'dust' on it on my forearm, a 'dusty pylon' is making fun of someone in hockey," Hawkins laughed. "So I tell her, 'Hey, I have a tattoo of you on my arm!' And she goes, 'What is it?' and I go, 'It's a dusty pylon,' and she turns and throws her glove at me. And the rest was history."

"No matter what, you always have someone who understands the schedule and everything that goes on," Hawkins said. "I think it's really special. I love it, and I think she does too. For us to both be able to understand where each other is coming from when we have different talks about schedules and playing and how tired we are and how our bodies feel, it's really nice to be able to relate. It helps our relationship a ton."

Looking at Hawkins' and Flanagan's Twitter feeds, you can see both players frequently sharing each other's highlights:

This has to be a joke. Are you kidding me @B_Hawkins17 😱 https://t.co/7lIPSijoOs

Coming out of college, both Hawkins and Flanagan should be able to relate by playing in their first professional seasons together, but it's not that simple in the women's game right now. Flanagan and many other women's players formed the PWHPA, a group of women sitting out of the NWHL or any other professional league in North America this season with the goal of fighting for the creation of a more viable and sustainable professional women's league.

"I love it," Hawkins said of the PWHPA's mission. "I think what they're doing is wonderful. My sisters both played, my little sister Maggie was a goalie until she had a knee injury that ended her career. I've always loved seeing women's hockey grow and grow. We're at the point now where it's going to be something big. If you're not on the bus, you're going to get left behind."

Hawkins and Flanagan train together with other U.S. women's national team players over the summer at Mike Boyle Strength and Conditioning in Massachusetts. and Hawkins sees the time and effort the women put into their game firsthand.

"They work just as hard if not harder than we do," he said. "If you came into the gym in the summer time, we're working together, and they're working harder than most of the guys that are in there."

Earlier this season the U.S. and Canadian women's national teams held a joint training camp in Cranberry, and Hawkins was able to see Flanagan play for the national team in person for the first time in the games at the conclusion of the camp.

"If you watched that series in Pittsburgh, it was a bloodbath!" Hawkins said. "There were full open ice hits being laid by both Lamoureux twins, a couple of girls on Canada, (Canada forward Melodie) Daoust was running goalies, how can you not love that? People say it's not physical, but that's not true. I love it. It makes that rivalry even better, there's a sheer hate between those two teams. It's awesome. It's like a Game 7 Stanley Cup game."

Women's hockey continues to make major strides, and it shouldn't be long before Flanagan and other women are playing in a sustainable professional league of their own.

"She works as hard as anyone I know, I couldn't be more proud of her."

Fans can watch the ECHL All-Star Game live on the NHL Network at 8 p.m. Eastern tonight.

• There were no roster moves this week.

• Jan. 17: at Kalamazoo, 5-4 loss
The Wings opened the scoring 3:27 into the game, and Justin Almeida answered with his third goal of the season 1:17 later. Kalamazoo regained the lead at 8:29, and Cam Brown answered less than two minutes later with his ninth goal of the season to again tie the game.

The Wings extended their lead to 5-3 27 seconds into the final frame. Nick Minerva brought the Nailers back within one goal, his third of the year, with 1:25 remaining in the game, but the rally fell short.

Hawkins led the Nailers with eight shots on goal as they outshot the Wings 36-29.

The Nailers went 1-for-4 on the power play and 2-for-2 on the penalty kill.

• Jan. 18: at Indy, 4-1 loss
The Fuel scored the lone goal of the first period at 12:27 to take an early lead. They scored twice in a span of 1:13 in the second period to extend that lead to 3-0. Almeida answered with his fourth goal of the year 17 seconds later to bring the Nailers within two goals.

The Fuel scored an empty net goal in the third period to seal the win.

Hawkins and Will Smith led with four shots on goal each as the Nailers were outshot 33-29.

D'Orio took the loss with 29 saves on 32 shots, including a save on a third-period penalty shot.

The Nailers went 0-for-5 on the power play and 1-for-1 on the penalty kill.

• The Nailers’ record of 17-18-4 has them sitting in fifth place in the six-team Central Division.

• The Nailers will host the division-leading Cincinnati Cyclones (25-10-6) on Friday and Saturday.

GOAL OF THE WEEK

Almeida banged in a loose puck:

The players got a little creative for a good cause:

Look out Picasso! These pieces will be raffled off at our Pups & Pucks game this Saturday, proceeds will be donated to the Ohio County SPCA!
We are hosting a dog toy/blanket/bedding drive, donations going to Marshall County Animal Shelter
🐶DOG SECTION🎟️https://t.co/tpEX7Ag46h pic.twitter.com/cHek5Ve1Ok