ROCHESTER, N.Y. -- Hot Button is a 'round-the-clock feature that covers anything across the scope of sports. We're here to bring you everything hot: news items, highlights, takes — everything but hot meals — whether local, national or international. Better yet, it’s interactive. Share your thoughts in comments, and even post your own links to interesting, safe-for-work, sports stories.

Thursday, 1/23: The Mets hired Luis Rojas as their new manager Thursday. The position had been open for one week after the team fired Carlos Beltran who was named as a key part of the Astros' sign-stealing scandal.

Rojas, 38, the son of former big leaguer and major league manager Felipe Alou, was the Mets quality control coach in 2019 and worked in their minor league system since 2007, including managing teams in the lower minors from 2010 to 2015.

It's difficult to know if the concussion statistic is good or bad news compared to 2018. Were players more reckless in 2019 or are more players just reporting and being diagnosed? — Bob

Thursday, 1/23: This isn't the kind of attention Patrick Mahomes wants before the biggest game of his life. Just as Mahomes' Chiefs are set to take on the 49ers in Super Bowl LIV, Twitter did its thing and went digging for old, potentially controversial tweets. They found them, too, with a series of tweets surrounding the infamous George Zimmerman/Trayvon Martin shooting in 2012:

Patrick Mahomes defending George Zimmerman in a series of tweets from 2011. Black twitter do ya thing. Cancel Patrick Mahomes. pic.twitter.com/YI5BHiLW9x

While the Internet at first assumed Mahomes was defending Zimmerman, some follow-up tweets were soon uncovered:

For all the people that think Mahomes defended Zimmerman: pic.twitter.com/5nfOEMJzGW

Personally, this is one of my least favorite aspects of social media. This kind of stuff always feels gross and wrong, especially when you consider Mahomes was barely an adult (just 18 years old) at the time of those tweets. There's really nothing here, but you better believe people will want to obsess over it until it finally blows over. -- Hunter

Wednesday, 1/22: Duquesne was throttled by Rhode Island Wednesday night, 77-55, at the Ryan center in Kingston, R.I. The Dukes were held to just 17 second-half points after holding a 38-30 lead at the half.

Forward Marcus Weathers again held up his end, leading Duquesne with 20 points and adding seven rebounds. Guard Maceo Austin had a team-leading 10 rebounds, but the Dukes were sloppy overall with 17 turnovers against just eight assists. Rhode Island (13-5, 5-1) shot 49.2 percent from the floor and got 53 points from its backcourt alone.

Rams guard Fatts Russell scored 15 second-half points, nearly surpassing Duquesne's team total, and led all players with 23 points, while guard Tyrese Martin turned in a double-double (13 pts., 11 rebs.). Defensively, they held Duquesne (15-3, 5-1) to just 18 of 55 shooting, including just 5 of 23 from beyond the arc.

Wednesday, 1/22: Texans defensive end J.J. Watt will host Saturday Night Live on February 1 in New York City, the day before Super Bowl LIV. The oldest brother of NFL siblings T.J. Watt and Derek Watt, J.J. has acted in movies and on television before, but it will be interesting to see his improv comedy chops.

Watt is the 11th NFL player to host the program, and the first since Eli Manning did so in 2012. There is no word on the musical guest, but one assumes it will be someone who's sung before. — Bob

FOUR PLAYERS OUT AFTER BRAWL

Wednesday, 1/22: The Big 12 handed out suspensions to four men's basketball players today resulting from a brawl Tuesday night between Kansas and Kansas State with one second left in the game. (There's more on that fight a couple posts down.)

Seems about right. Of course, these are just league suspensions. The respective teams suspended De Sousa and Love indefinitely following the incident. — Bob

Wednesday, 1/22: Pitcher Mitch Keller (No. 52), third baseman Ke'Bryan Hayes (No. 56), and shortstop Oneil Cruz (No. 57) were named in Baseball America's Top 100 prospects Wednesday. Keller, 23, was 1-5 with a 7.13 ERA and a a 1.833 WHIP in 11 starts for the Pirates last season. He did, however, have 65 strikeouts in 48 innings pitched. Additionally, some advanced metrics showed he pitched better than his line. The Pirates will hope those analytics are correct as Keller is an essential piece to the 2020 rotation.

Hayes, 22, has little left to prove at AAA, winning his third consecutive minor-league gold glove in 2019, while slashing .265/ .336/.415 with 10 home runs and 30 doubles at Indianapolis last season. Alex Stumpf wrote a feature on Hayes for the site Tuesday.

Cruz, 20, a 6-foot-7 shortstop, reached Double-A Altoona in 2019, rebounding from a slow start to slash .269/.346/.412 in 35 games. Cruz was also shut down after eight games in Dominican winter ball — not injury related. The Pirates will be looking to see if Cruz can stay at shortstop or if he'll need moved to a different position. Either way, he's ticketed for 2022 at the earliest.

Only Bolton could make it to Pittsburgh in 2021. None of the others are expected in Pittsburgh until 2022 and beyond. — Bob

Wednesday, 1/22: The Raiders' move to Las Vegas became official today. The team held a ceremony to mark the occasion, releasing a video on social media:

Their first act in their new home was to donate some money to help eliminate student-meal debt in Nevada. — Bob

Wednesday, 11/22: MLB commissioner Rob Manfred confirmed in an interview Wednesday that many already assumed: The Astros and Red Sox will not be stripped of their World Series titles won in 2017 and 2018, respectively, regardless of the outcomes of the cheating scandal investigations because of the "long tradition in baseball of not trying to change what happened."

No big surprise there. Pro sports leagues are loath to do it. — Bob

Wednesday, 1/22: Well, this was ugly. Kansas blew out Kansas State Tuesday night, but all the talk will center around the end-of-game brawl that involved several players, a chair and plenty of commotion:

Gross. That's Dajuan Gordon stealing the ball as Kansas attempted to dribble out the clock. As he attempts the meaningless lay-in, he's emphatically rejected — then stared down — which leads to the chaos.

“Obviously, it’s an embarrassment," Kansas coach Bill Self told media after the game. "It’s not something that you’d be proud of. What happened is absolutely zero signs of toughness. It’s a sign of immaturity and selfishness more so than it is toughness."

The two teams came back onto the court after this to burn out the one second remaining, which feels weird but was technically correct. Regardless, both teams will want to put this one in the rearview ASAP. -- Hunter

Tuesday, 1/21: The 2020 NFL Draft, being held in Las Vegas, released artist renderings of the draft stage, which will be in the middle of the fountain pool at Bellagio Hotel and Casino:

The stage for the 2020 NFL Draft in Las Vegas will be on the water at the Fountains of Bellagio. The players will be transported to the stage by boat. pic.twitter.com/8sVl8p2ZBx

With the draft picks being brought to the stage on boats, what could go wrong? There is no word on whether orcas and dolphins wearing team jerseys will be making leaping jumps with the announcements, though I wouldn't rule out Cirque performers forming a human goalpost.

The Steelers, ever prescient, will save on dramamine as they don't have a pick until Round 2. — Bob

Tuesday, 1/21: Todd Graham has taken his talents to Oahu. The famously transient former Pitt head coach was hired as the new head coach at Hawaii Tuesday.

Graham, who was fired at Arizona State after going an impressive 28-27, replaces Nick Rolovich. Rolovich was hired at Washington State. Graham spent one season at Pitt, going 6-6, before leaving for his "dream job" with Arizona State. -- Lolley

Tuesday, 1/21: Jameson Taillon took to Twitter on Tuesday to announce that he is on schedule with his Tommy John rehab and is throwing again:

TJ rehab is all about hitting the ‘check marks’ along the way. Yesterday was a big one- got to toss at 60 feet, which kicks off the throwing progression! Excited to be doing what I love again, even if it’s “just”playing catch!

Terrific news for the Pirates. A healthy Taillon is essential for any relevance moving forward in 2020 and beyond. — Bob

Tuesday, 1/21: Duquesne and NBA legend Chuck Cooper, the first black player to be drafted into the NBA, was honored by Converse on Martin Luther King Day with the announced release of a shoe bearing his name as part of their limited edition Breaking Down Barriers collection which will also honor Nat Clifton (first black player to sign an NBA contract) and Earl Floyd (first black player to appear in an NBA game). The shoes honoring the three men will be available on Converse's website beginning January 23:

Cooper, a Pittsburgh native who played at Westinghouse High, was drafted by the Celtics in the second round in 1950 and played six NBA seasons. Celtics legend Bill Russell famously refused to accept his Basketball Hall of Fame ring following his 1975 induction, claiming that it was not appropriate for him to be the first black athlete so honored. After Cooper was inducted in 2019, Russell, satisfied that the league finally recognized the contributions of a seminal black player, accepted his ring in a private ceremony.

Duquesne is honoring Cooper's legacy, as well, naming their new on-campus arena the UPMC Cooper Field House. The arena is scheduled to open in time for the 2020-21 season. — Bob

Darrelle Revis shared thoughts on Richard Sherman from his couch.

To no one's surprise, this started a Twitter feud among fans, with supporters of each claiming their player was better. Steelers linebacker Vince Williams has been chiming in, too, and he had an interesting take:

Why should Twitter have all the fun: Is Revis right — is Sherman overrated? Or are you on team Sherman? — Bob

Pees, 70, coached two seasons for Tennessee and was previously defensive coordinator for the Patriots and the Ravens, winning a Super Bowl XLVII with Baltimore in 2013. He originally retired from the NFL in January 2018, but was convinced to come back by Titans head coach Mike Vrabel after he was hired in Tennessee.

Pees' defense was instrumental in the Titans' run to the playoffs this season before losing in the conference finals to the AFC Champion Kansas City Chiefs. — Bob

1K FOR KANE Sunday, 1/19: Blackhawks center Patrick Kane got his 1000th NHL point Sunday on a third-period assist in Chicago's 5-2 victory over the Jets at the United Center. Kane, 31, is the youngest U.S.-born player to accomplish the feat, besting Jeremy Roenick by more than one year. Kane now has 380 goals and 620 assists over 13 seasons with the Hawks. 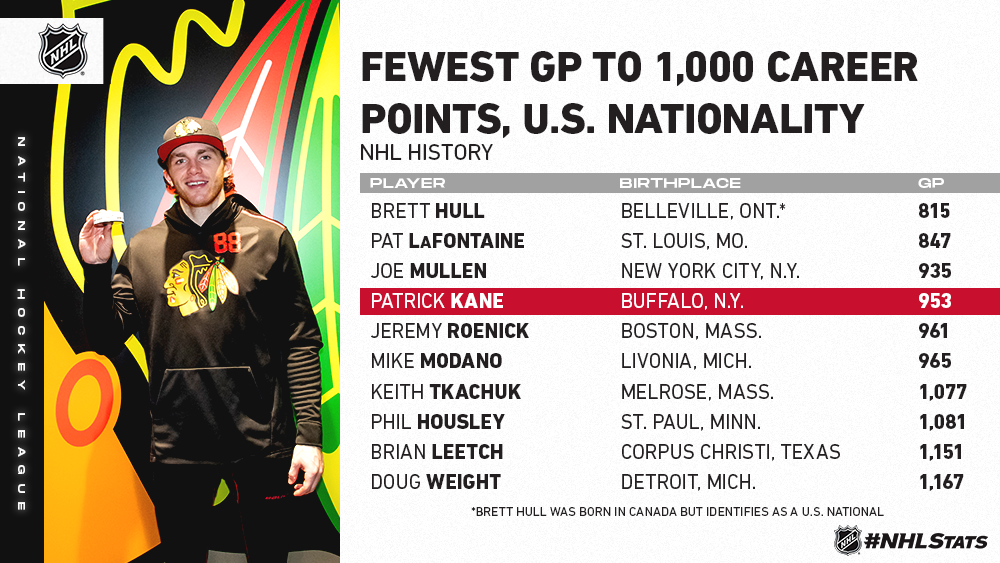 Considering his age and that he's averaged over a point per game in his career, it seems like Kane is destined to top Brett Hull's 1,391 points and become the highest scoring U.S. player. — Bob