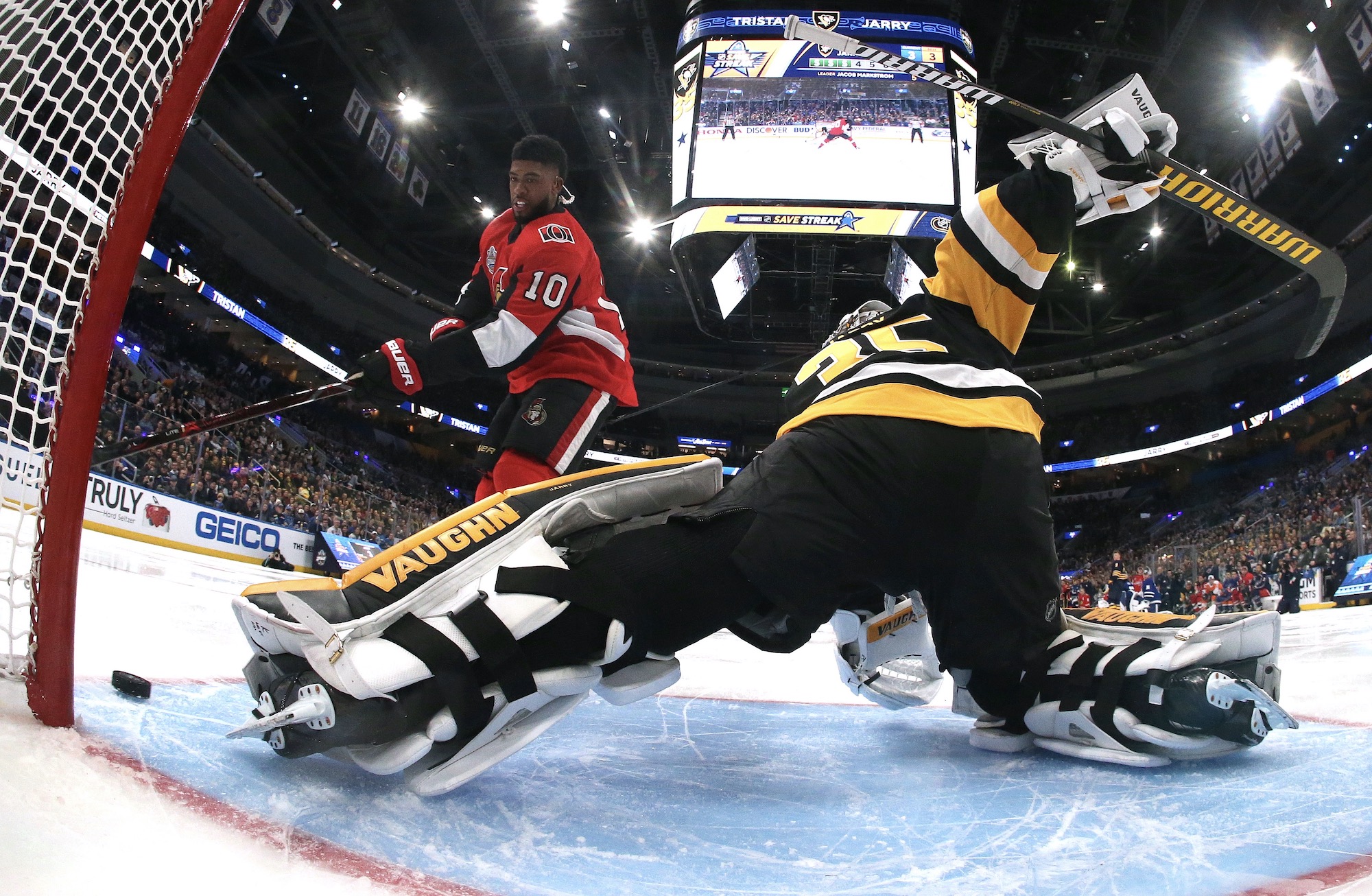 ST. LOUIS -- The NHL's All-Star skills competition is always an entertaining part of the All-Star weekend, and that was still the case here in St. Louis on Friday night.

The two Penguins participants -- Kris Letang and Tristan Jarry -- didn't have large roles. The goaltenders all participated in their own event, the save streak contest, and Letang's only job of the night was being one of the shooters in that event.

"It's cool," Jarry said. "It's cool to see all of the events, the Shooting Stars one was pretty cool. Being able to do the event I did was exciting. It's a lot of standing."

Here's how the night went down.

“I might have gotten lucky this week," Barzal said afterward. "(McDavid) was on a break, his break actually happened for a few days so he hadn’t been on skates for a while. We just finished two days ago so I was fresh on my skates."

Barzal finished third in this event last year, with a time of 13.78.

This isn't the most exciting event, but Jordan Binnington managed to make it exciting for the home crowd. He went last in the order, with Andrei Vasilevskiy's nine consecutive saves in the leading spot. Binnington stopped 10 pucks in a row for the win.

This event is sort of comparable to the old breakaway challenge, when players used to do crazy things on shootout attempts. The difference here is that the shooter is actually trying to score, whereas before, whether the puck went in didn't really matter. Tomas Hertl's shot on Binnington was reminiscent of the old breakaway challenge shots, though.

Last month, Justin Bieber shared video highlights of himself in his adult league games. Binnington commented on one video, saying, "10 breakaways me vs. you. You score on me I'll dye my hair platinum blonde."

So, when it was Hertl's turn to shoot against Binnington, he did so in a Justin Bieber mask:

Tristan Jarry was in a three-way tie for last in this event, with four straight saves. He actually went six shots in a row without allowing a goal, but it was decided that a shot that missed the net didn't count as a save for the streak.

"Just to play how I normally would in a game," Jarry said of his approach. "Just try to get in front of it and stop as many as I could."

This year, instead of an actual net, players shot at an entirely digital screen behind glass. Players shot at shapes on the screen that included random facts about themselves, like the number they wear and how many All-Star appearances they've made.

The whole change seemed necessary, and the change didn't happen smoothly. The plexiglass broke in one corner after the first shooter, and there was a delay as it was replaced. When Hertl took his shots, it looked like he may have hit the edge of the final target several times before it registered. Then, when Jonathan Huberdeau took his shots, the final target was marked as hit after he hit the digital post.

Carolina's Jaccob Slavin was the winner here, hitting all of the targets in 9.505 seconds.

I have a full separate story on this, but this was the coolest event of the night, and probably the most competitive we'll see anyone be this weekend.

The open three-on-three format, played in two 10-minute halves, was a good way to showcase the speed of the women's game, and both teams were flying and exchanging chances back-and-forth. The goaltending on both sides -- Alex Cavallini on the U.S. and Ann-Renee Desbiens on Canada -- stole the show.

Canada took a 2-0 lead off of goals from Rebecca Johnston and Melodie Daoust, and Hilary Knight got the U.S. on the board late with a backhand five hole shot, but the U.S. rally fell short and Canada won the game.

No surprises here, but Shea Weber won this one. He won it twice over, really. His first attempt was clocked at 105.9 miles per hour, and his second attempt at 106.5 miles per hour. They were the hardest two shots of the night, good enough for Weber's fourth straight win in years in which he's participated.

The event was demonstrated by 56-year old Blues alumni Al MacInnis, who took a shot with an old wooden stick that "registered" as 100.4 miles per hour. The calibration on the gun for that shot seemed to be a little off to say the least, but it was a good shot nonetheless:

The new Shooting Stars event made its debut this year, and it wasn't quite as goofy as the initial description made it sound. Players stood on a platform high in the lower bowl that had an ice-like surface, and took shots at various targets around the ice that had different point values, the highest of which was a big Gateway Arch at center ice.

Players pretty much only tried to shoot for the Arch at center ice, rather than the little targets scattered around. Knight said that during their practice shots before tonight, players found that the smaller targets with lesser values were actually harder to hit anyway.

Patrick Kane and Mitch Marner were tied at 22 points each after the initial rounds, and Kane won the event with two more overtime points.

Of the 10 total shooters, Canada's Marie-Philip Poulin finished in fourth with 15 points, and Knight finished tied for fifth with 14 points.

MORE FROM THE SKILLS COMPETITION

After the save streak event, many players brought their children out on to the ice to sit with them and watch the remaining events. That included Alex Letang, who was the star of his dad's media availability earlier in the day. Alex worked on his passing with some of the All-Star players:

"That was cool when I passed to the All-Star players," Alex said after. "I really liked it because that way I could shoot pucks, because I really like hockey."

There was a moment where Letang stepped away, and Jarry was stuck with babysitting duty.

"He had a blast," Jarry laughed when talking about Alex. "I think he had a lot of fun playing with all of the guys, passing the whole time and telling everyone he's going to take their jobs eventually. It was fun."

Is Alex going to take Jarry's job too?

After the events were over, Letang snapped a picture of Alex with Poulin, the captain of the Canadian national team:

Kris Letang asked Marie-Philip Poulin to take a photo with his son and it was adorable.#NHLAllStar pic.twitter.com/2267NCgIq4