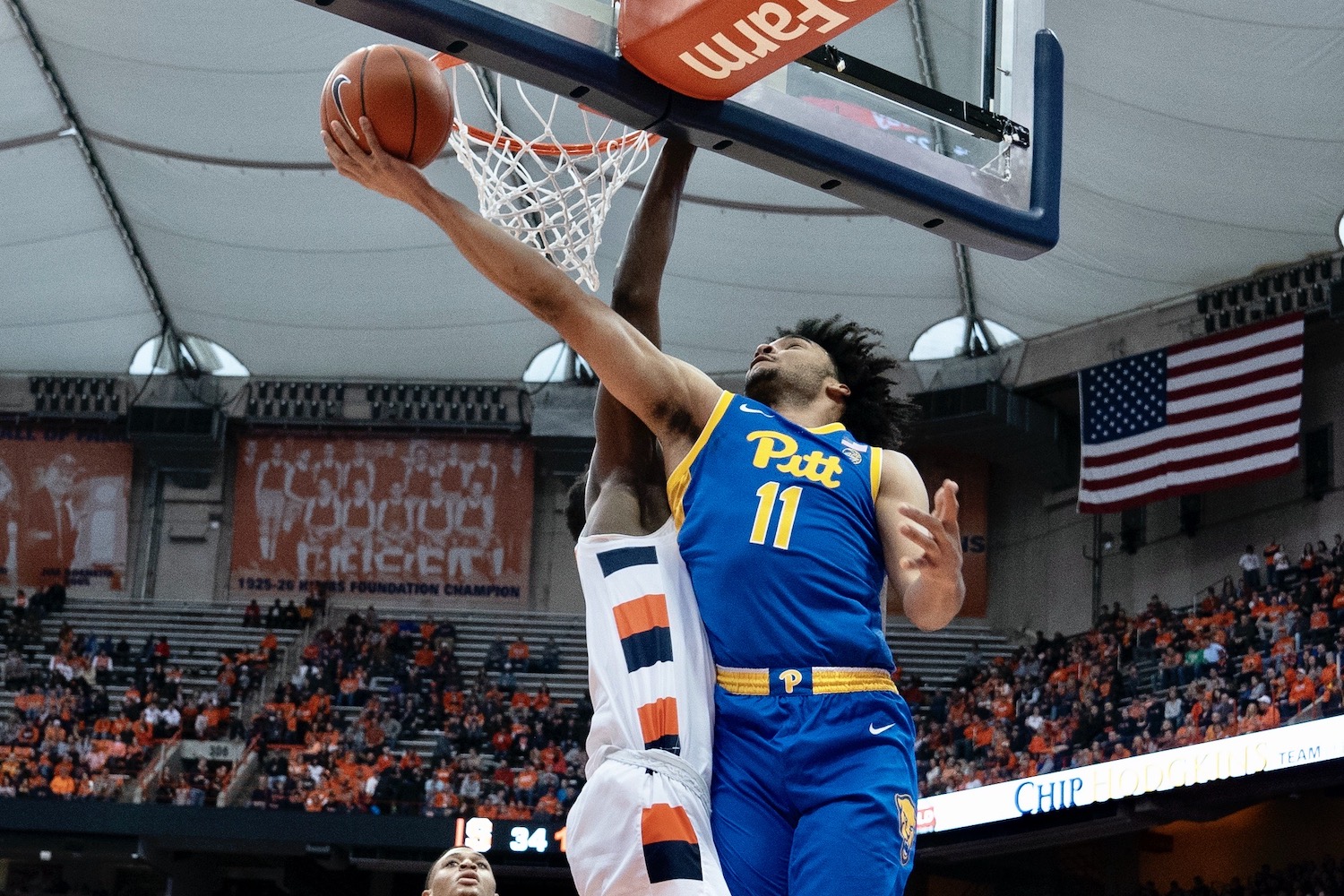 SYRACUSE, N.Y. -- Elijah Hughes struts along the baseline at the Dome, locking eyes with the crowd and waving his arms in the classic "Let's get loud" gesture. A yell of "come on" follows from Syracuse's star forward, sending the thousands of citrus heads in attendance into a frenzy.

It's loud. I can't see the court unless I stand like the rest of 'em. The press table shakes, threatening to spill the coffee immediately to my left.

And, my goodness, will Pitt ever score again?

"I thought we were a little bit shell-shocked by the zone, just the size and length of it," Jeff Capel was saying during his post-game press conference.

That's one way to put it.

When Hughes played cheerleader in that scene up there, though — up 20, 30-10, with 4:51 left in the first half — it was worse than shell-shock for these Panthers. It was a beatdown the likes of which they hadn't experienced this season.

Buddy Boheim transplanted straight from NBA Jam onto the hardwood, putting up 18 first-half points and getting them any way he wanted. It was cartoonish. Three from beyond the arc. A couple free throws. Three more. A couple turnaround jumpers over Xavier Johnson. After one three-pointer, his third and final of the half, Boeheim literally beamed a toothy grin while trotting downcourt to get back on defense. He wasn't pumped up and rowdy. He was calmly laughing at how perfect and easy it all was.

"I thought Buddy was incredible in the first half, really got them off to a great start," Capel was saying in his post-game press conference.

Pitt started to score. And to defend. And all that hype and bravado from Syracuse started to wither.

And there was indeed plenty for Capel to love.

Hughes — the ACC's leading scorer at 19.7 points per game coming into this one — didn't score until the second half, finishing with 10 points on 31 percent shooting, including an 0-for-4 showing from deep. He also added four turnovers — tied with Boeheim for the team-high.

“Just basically sit on him, make it uncomfortable for him," Justin Champagnie was saying of the team's strategy in slowing Hughes. "We felt like nobody pressured him. A lot of teams don’t give pressure, so I felt like if we just bring heat he’d start coughing the ball up. First half, he did. Second half, they went more of like an iso."

Hughes didn't torture the Panthers in that first frame, but there was plenty of pain for the visitors nonetheless. They never snagged the lead at any point. The game was tied once — at 5-5 — for all of 22 seconds before Boeheim knocked down a jumper for two to give Syracuse the lead for good.

Pitt shot 23 percent in those first 20 minutes — 6 for 26 — including an 18-percent performance from beyond the arc. They were out-rebounded, 27-16. They did snag the edge in turnovers, forcing seven while committing just five, but Syracuse scored six points off their opportunities, while Pitt could only convert for five of their own.

And that "shell-shocked" reaction to the zone Capel mentioned?

"It’s hard for us to simulate that in practice, especially in a day and a half," he would add.

The players felt it, too.

"They’re a bigger team than us, height-wise," Champagnie said. "So it was kind of more spread-out [than what we could simulate in practice]. They do a good job of it. That’s, like, the main thing here. Everybody knows [their] zone."

Little by little, though, Pitt started to crack the code, beginning late in the first half. Champagnie drilled a jumper. Au'Diese Toney added three more. Johnson got in on the action from behind the arc.

In all, Pitt cut the 20-point deficit to 11, silencing the crowd just a touch along the way. It all felt familiar for this 2019-20 Pitt squad, the same team that came back on the road in Chapel Hill, N.C., to win and that has been wildly streaky throughout the season.

So what's the mindset when you look up and see a 20-point hole just 15 minutes into the game?

"Stay focused, stay together," Champagnie recited as if reading from a golden slate of Capel's Commandments when I asked him. "We don't want to break apart and splinter apart, so we just gotta stay together and just stay the course and fight on."

And then when that starts paying off ...

"The momentum coming from the first half, end of the first half, it kind of gave us the feeling that we could actually come back and win, so that momentum just carried us through the rest of the game, basically," he finished.

Besides the idea itself, there's something important in that video with Champagnie. You'll hear a team official scoot behind us and joke that Champagnie needs to get tougher — "Tell him to get tougher before this next question" — drawing a smile from the freshman standout.

He wasn't down on himself after this one — and nobody in that locker room was. Even with Capel, the team's toughest critic, there wasn't the usual disappointment or sense of "walking on eggshells" with questions in the presser. Nobody was happy about the loss, don't get it twisted. But everyone involved understood what happened, too.

Pitt showed they could hang with Syracuse, enduring their worst start of the year to outscore the home team, 51-39, over the final 25 minutes of play.

Capel had a different twist on it.

"I don't even know when it is that we play them again," Capel said. "I know we do, but I'm moved on to Tuesday."