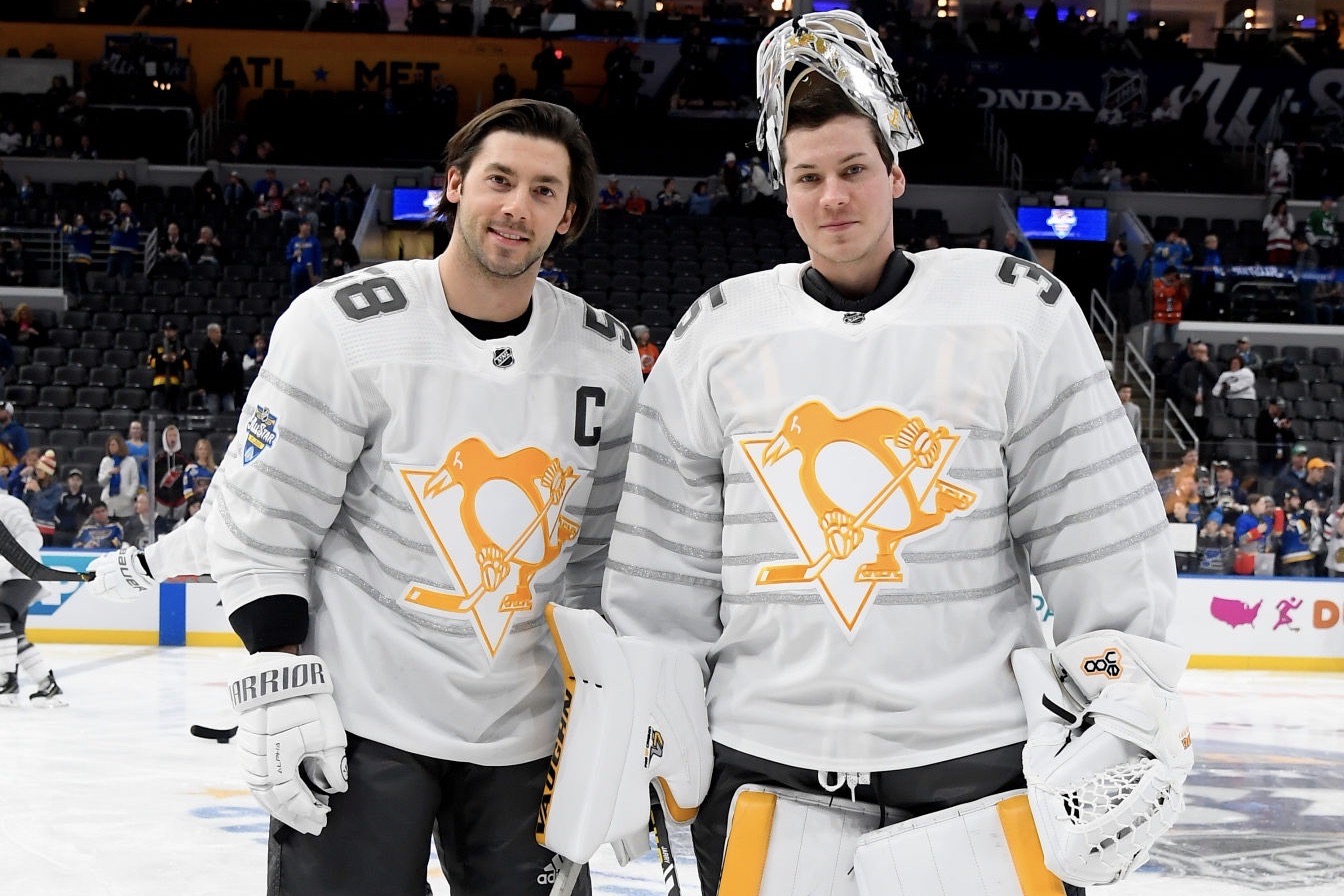 ST. LOUIS -- The Metropolitan Division didn't take home the big $1 million prize for winning the three-on-three tournament here at the 2020 NHL All-Star Game, but the Penguins' two All-Stars, Kris Letang and Tristan Jarry, couldn't have seemed happier when speaking about their whole experience this weekend.

The Metro was eliminated by the Atlantic Division in Game 1, 9-5. Jarry made eight saves on 11 shots, taking over in the second half after the Capitals' Braden Holtby stopped five of nine shots in the first half.

Letang had no points and was a minus-4, but led his team with four shots on goal. When asked after the game if he was playing defense or forward, he wasn't totally sure.

"I have no clue what I was playing," Letang laughed. "I thought we were a shutdown line or something like that. I don't know. There's so many great players, it doesn't really matter who you play with. We try to make fun of it. ... It was whatever."

The actual game is secondary in the whole All-Star weekend experience. For the players, a big part of the weekend is about being able to share this experience with their families. And of course, for Letang, that's his son Alex, the star of the weekend. For Letang's media availability after the loss, he hoisted Alex onto the podium and said, "Here's Alex Letang," as if he was Alex's personal PR manager. And yet again, Alex didn't disappoint. He even met with the French-speaking media and did an interview in French after speaking with us in English:

And the highlight of his dad's performance?

"I really liked how first, when they were all in a row, he gave me a 'Hi,' " Alex said, waving his hand.

When Alex was asked who was the better skater between Letang and himself, he said he thought they were "equal."

One of Alex's favorite parts of the weekend was getting to meet all the team mascots, and he proudly showed off his All-Star jersey that was signed by the mascots and players, and his bag of different stuffed mascots he collected.

"I really liked when they signed it, I had fun with the mascots," Alex said. "It was really funny because the mascot of Vegas put me in his mouth. He eated all my face."

Mostly, Alex enjoyed spending this time one-on-one with his dad, after Letang's wife and their daughter stayed home.

"I really like how we had fun," Alex said of the weekend. "It was really fun. I was really happy to come to the game."

For Letang, being able to bring Alex and share this weekend with him when he's at this age was what made the weekend special.

"It's the best moment to bring your family," Letang said. "It means a lot. It's something I thought about, that one day I won't have the chance to go. This year is a good time. He's well aware of what's going on and loves hockey."

And, because this is Alex Letang's show, he handled most of the interviewing duties during Jarry's postgame availability:

"How did it feel great to be a goalie?" Alex asked.

"It was lots of fun," Jarry said with a smile. "I had a lot of shots and I tried to stop as many as I could."

"How much fun did you got this weekend?"

"Lots of fun," Jarry answered. "It was lots of fun to play with your dad, and him show me everything. To be able to spend time with you and him together, that's what memories of made of."

Jarry had his girlfriend, family, and his billet family from his junior days in Edmonton come to St. Louis for the game, and being able to share this experience with them made the weekend special.

"It's nice to have (the billet family) here," he said. "They've been a big part of my life, it's neat that they're able to come down and watch."

Of all of the players Jarry was able to meet this weekend, he was the most excited to get to know Holtby more. 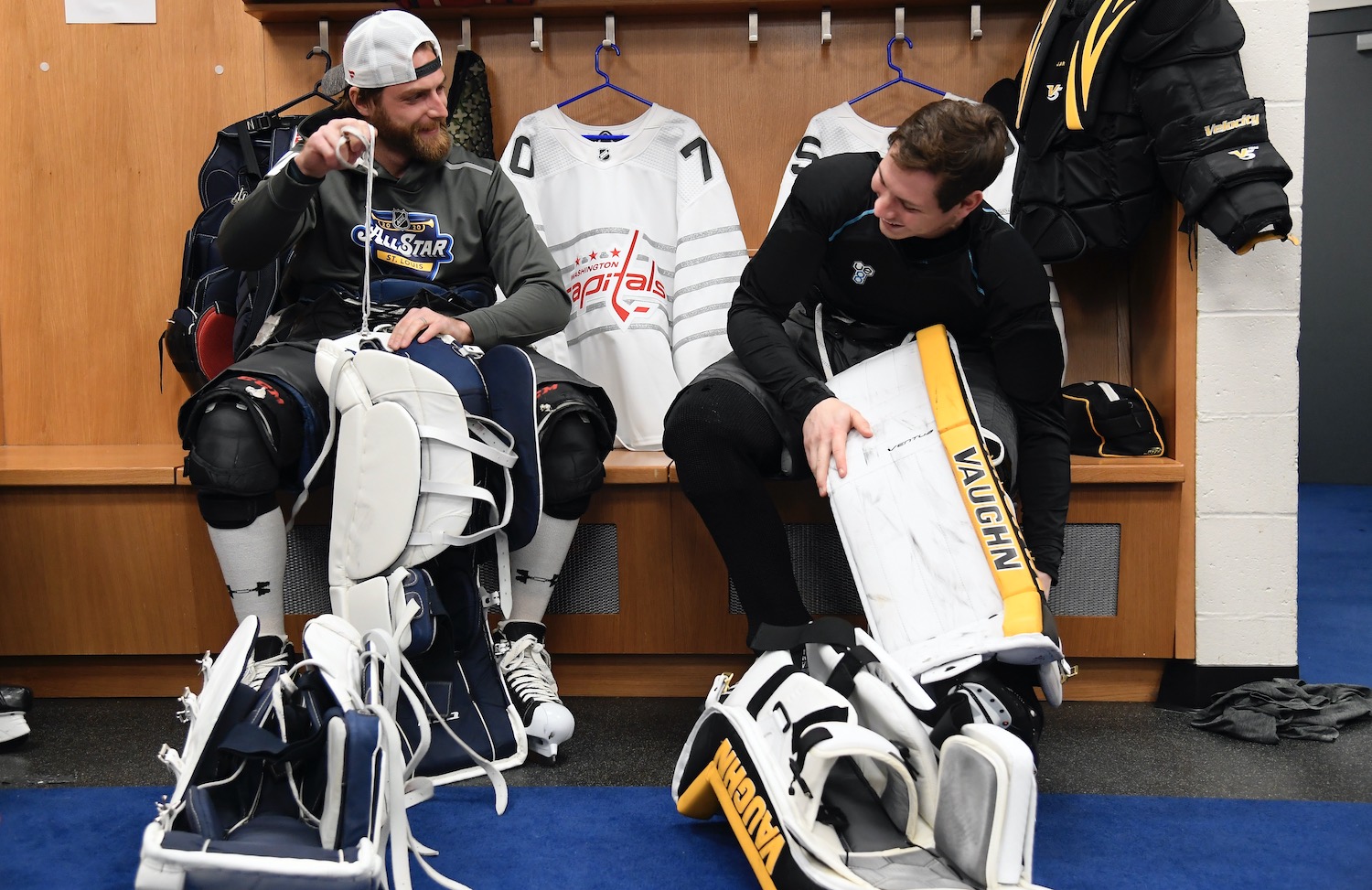 "Just being from the same region that I am, Western Canadian kids, it was cool to meet him," Jarry said. "I've watched him for a long time, it was cool to play with him. He was very open. I asked him a lot of questions about the weekend, what we'd be doing. He's been through it many times, so I think he helped me a lot."

Jarry said he got two of his sticks signed by All-Star players from both sides, and called them "something I'll keep forever."

Jarry said it didn't really hit him that he was in the All-Star Game until the other team's first rush toward him and his first save. Still, he added, it was a surreal experience.

"It's set in a little bit," he said. "I think it's something that will take a couple of days, and I'll be able to think about it and realize all that happened."

MORE FROM THE GAME

• The East and West mascots faced off before the All-Star Game, and the West mascots earned a 6-4 win. Iceburgh was not in attendance, as the performer who wears the suit had a death in the family recently.

The Leafs' Carlton the Bear was an absolute liability in net for the East, while the Ducks' Wild Wing really stood on his head for the West. The No. 1 star was easily the Blues' Louie, with two goals and another that was called off for offside. The unsung hero for the West was the Flames' Harvey the Hound, who had a couple of great feeds for assists and some poke checks to break up chances by the East. He was also one of the only ones who could really skate.

The Bruins' mascot, Blades, had a strong two-goal game for the East but his performance wasn't enough for the win.

Gritty was the only player to be penalized in the game, and he had a couple of whacks and crosschecks that went uncalled.

• In the first half of the Metropolitan-Atlantic game, when Jarry was on the bench, Gritty was on the other side of the glass in the stands trying to heckle him.

• The Pacific Division eliminated the Central Division with a 10-5 win in the second preliminary game.

• The Pacific Division took home the $1 million prize in the final game with a 5-4 win over the Atlantic.

"It's fun," the Kings' Anze Kopitar told me after the game. "It's been a fun week as a whole. Once the competitive juices start flowing a little bit, you want to win. Especially after we won the first game, we didn't want to be waiting around for nothing."

The speed of the final game was much faster compared to the earlier games. Guys were actually trying this time and playing a little bit of defense.

"We started off about the same as the first game, and then it just picked up from there," Kopitar said. "We have some good goal-scorers, they put some goals on the board and we were able to lock it down."

• Bruins forward David Pastrnak was named MVP of the game after scoring a combined four goals and six points over the two games.

• Green Day performed their songs "Basket Case" and "American Idiot" at second intermission. They cut out Billie Joe Armstrong's mic in the arena where there were swears in the song, but he made up for that with one "Get your f------ hands up in the air" and two of "Let's go f------ crazy" for a "f------ hat trick." Language warning, obviously: