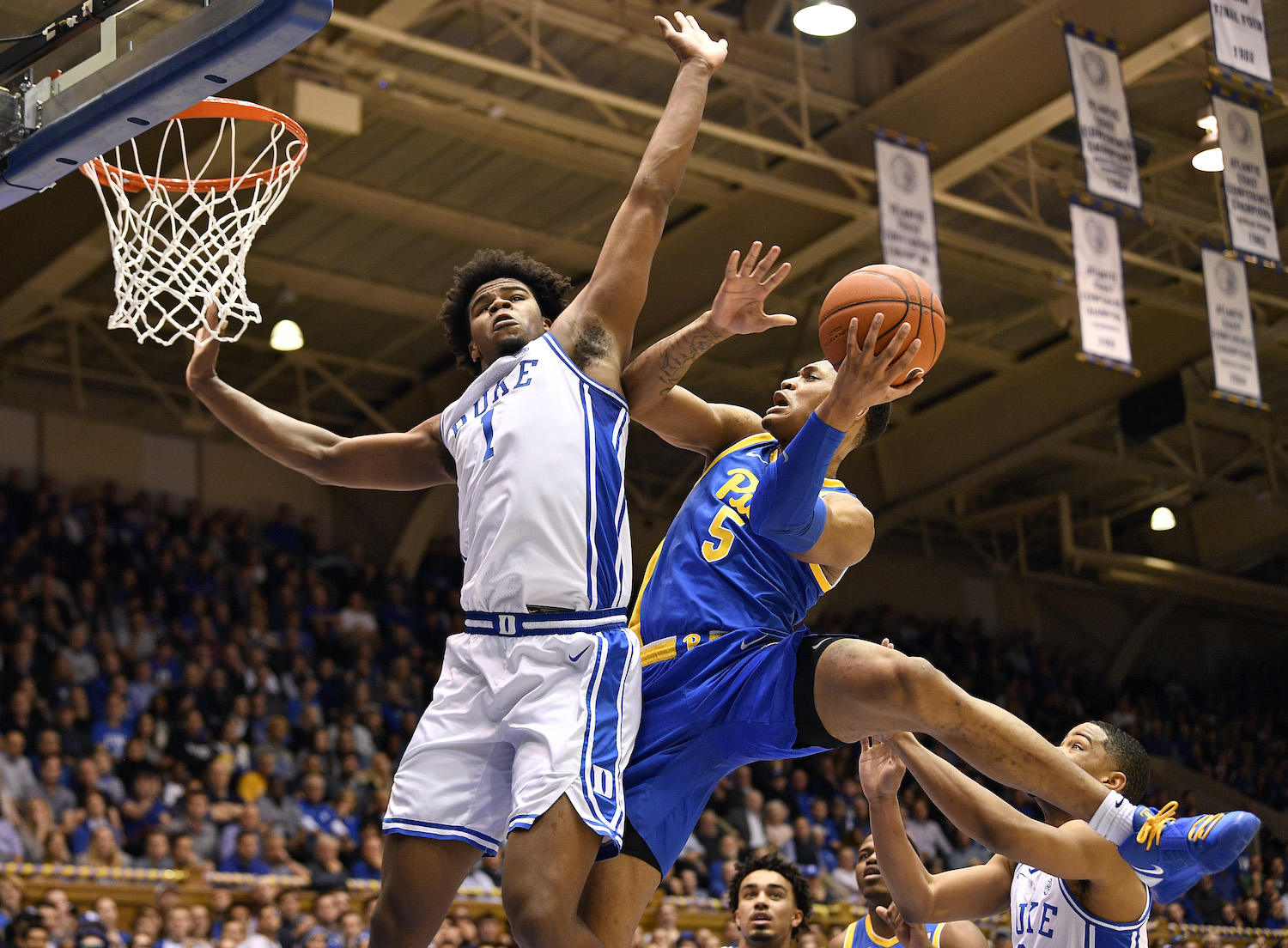 Because all Toney did throughout Pitt's 79-67 loss to No. 9 Duke at Cameron Indoor Stadium was stuff like this:

It wasn't just that Toney scored a career-high 27 points on this chilly Tuesday night in Durham. It was how he scored them. Dunks. Transition lay-ins. Threes. Sharp, smart backdoor cuts to feast upon Duke's aggressive defense.

The numbers reinforce Capel's words, but so do plays like that look to Justin Champagnie in the second gif above — a beautiful feed after some slick handles to set his teammate up for the bucket.

Toney showcased vision and finishing and efficiency — scoring his 27 on an 11-for-19 performance from the field, including a 3-for-4 breakout from beyond the arc. And he had it all while registering zero turnovers and playing all 40 minutes in one of the team's grittiest ACC performances to-date.

"I mean, really nothing different," Toney was saying of his game. "It was just making shots, picking your shots and being comfortable knocking it down."

For close observers, though, this performance shouldn't come as a complete surprise. It's been brewing under the surface with Toney, bubbling like lava just waiting on its chance to greet the world. Tuesday night, it erupted.

Through 13 games to start the season, Toney averaged 6.4 points per contest, never topping 13 during that stretch. Then, he went down with an elbow injury in practice, missing the team's first two games in January — a road win against North Carolina and a home loss against Wake Forest — as a result.

When Toney returned to the lineup, his offense clicked at a new level. He put up a season-best 16 in a win back at the Pete over Boston College and now, after Tuesday's loss to Duke, Toney's averaging 12.6 points per game post-injury. Yeah, I like easy math too. That's almost exactly double his pre-injury clip. He's still efficient, too, shooting 56 percent during the hot stretch.

"Yeah, it just was a setback," Toney was saying when I asked him about that post-injury burst of offense. "Just sitting out for the injury, letting myself heal and actually getting in the gym and using that time when I was trying to get healthy and pick my spots and stuff like that."

Does that sound too ... obvious?

It sure does. And that's the beauty of it.

I can get down with that line of thinking, if only because I watched it play out in the night's most emphatic play on either side. It didn't affect the outcome at all — just 40 seconds left, Duke up by 14. The game was a wrap.

But there goes Toney:

"Yeah, I surprised myself. I just [saw] it coming off the rim and just went for it," Toney said of that particular play when I brought it up after the game.

I mean, my goodness. I left the sound on that video for you when you press play, but pay attention to the totality of the clip, and keep it all in context. There's the play itself — an insane putback slam over Cassius Stanley. There's the energy in the roar from Toney. There's the Pitt bench standing in unison and the commotion from the home crowd as a soundtrack for it all.

The game was long gone, but that's Toney — a player who earned a short stay on cruise control more than anyone in blue and gold on this night — jamming the pedal to the floor and squeezing out every last drop of horsepower from his being. And he knows that passion's the single greatest asset he brings to the court.

"Yeah, I feel like my offense can keep us going and give us the spark plug," Toney said when I brought up his energizing effect.

Only tonight, that wasn't enough. Take all the highlights, all the slams, all the roars and all the bravado and file 'em away under "L" on this evening for the Pitt Panthers.

"You're coming back close, but at the end of the day, you still got that 'L' on the right-side column," Toney said. "We're close, but it's not good enough, like Coach says."

Coach Capel does say that. Like, verbatim moments earlier during his presser:

That idea of "closer" felt happy and joyous at one point for these Pitt Panthers, even as recently as in the team's loss to Syracuse in upstate New York. But when you fall behind by 17 in the second half against Duke then work all the way back to striking distance — within three — before sputtering and stalling to fall to 13-8 and 4-6 in the ACC?

It gets old for all parties involved.

It's the kind of loss that can outshine a career night and linger bittersweet.