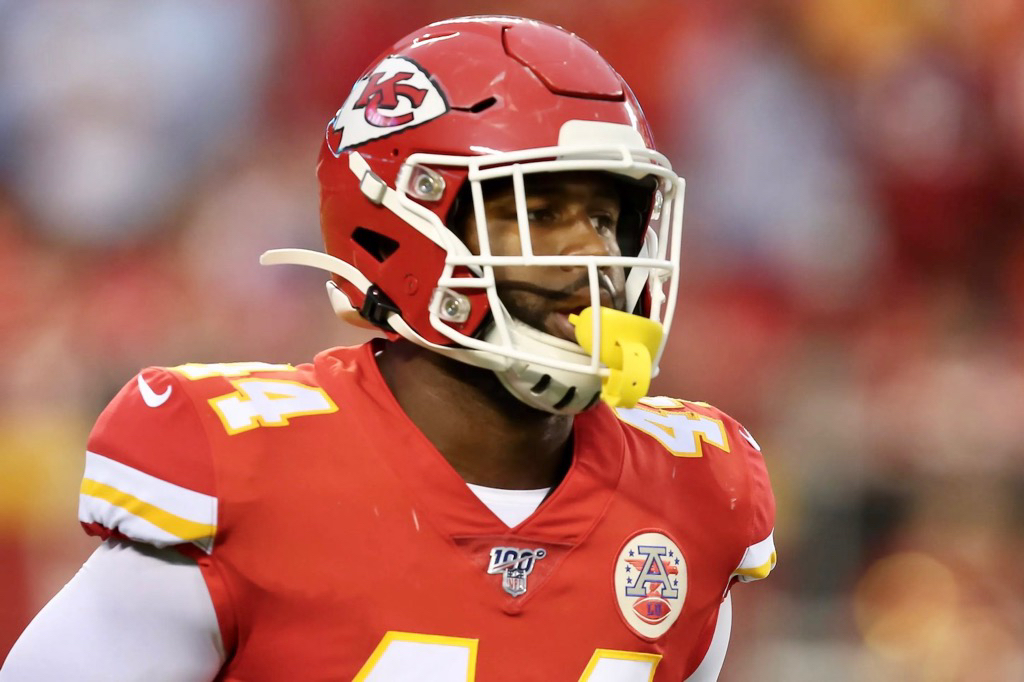 MIAMI — When your last name is O’Daniel and you live in Canonsburg, you wrestle.

That was certainly the case for Dorian O’Daniel. As a youngster growing up in Canonsburg, he was regaled with stories of the exploits of his uncles, Romy and Keilan O’Daniel, on the mat for the Big Macs. The two combined for nearly 200 wins and were both three-time PIAA place winners, with Keilan O’Daniel winning a state title in 1994, the year Dorian was born.

For a while, it seemed young Dorian would follow his uncles into wrestling.

Life, however, had a different path. It’s one that has led him to the Super Bowl this week as a linebacker for the Chiefs, who will take on the 49ers this Sunday at Hard Rock Stadium.

O’Daniel, one of a number of players involved in this Super Bowl with local ties, said he has six family members here at the Super Bowl this week, including his uncles. Had he followed in their footsteps, this day might not have happened.

“By default,” O’Daniel told me here in Miami of his push into wrestling as a child. “I played a lot of sports growing up. I played football primarily, obviously. But because of my last name, who my uncles were, I wrestled for like four years. I didn’t hate it. I was decent at it. I did Junior Olympics, the whole thing. But I was good at football like my uncles were good at wrestling. It wouldn’t have been my cup of tea. I’m glad I did it because it gave me some wrestling background. It is a nice background to have.”

O’Daniel’s family moved to Maryland when he was in seventh grade and his football career began to take off.

A star running back at Our Lady of Good Counsel in Olney, Md., O’Daniel got his first college offer after his freshman season from Pitt. But his future fell on the other side of the ball as a linebacker.

He instead chose to go to Clemson, where he was part of the school’s national championship team in 2016.

And while the national championship in college was obviously something of which he is proud, winning a Super Bowl would be completely different.

“It’s surreal. It finally started setting in last week,” O’Daniel said. “Then getting down here. You try to call it another game, but it’s a big deal. I’ve got to treat it like such. There are a lot of guys that get to this point and don’t return. I’m taking that for what it is and enjoying it.”

That means making the most of each opportunity he gets.

O’Daniel plays mostly on special teams for the Chiefs. He finished second on the team with nine special teams tackles this season but also has gotten some addition opportunities on defense. In the Chiefs’ Divisional Round playoff win over the Texans, he recorded his first career sack.

But O’Daniel knows his main contributions will come on kick coverages.

“It’s adversity. Truth be told,” O’Daniel said of being a backup. “I really didn’t play much until my junior and senior year at Clemson. It’s all part of the process. I can’t compare my process to the next man’s. We’re different people and there are different things we go through. My thing is to stay the course and control what I can control, my work ethic, attitude and how I attack each day.

“Obviously, it’s a little frustrating because I want to play. I want to make an impact. But the only thing I can do is respond and make the most of my opportunities when I’m out there.”

And in some ways, it will afford him different chances than most, such as doing something about which he’s dreamed for a long time.

O’Daniel is on both the Chiefs kickoff return and kickoff coverage teams. But there’s no doubt how he wants to start Sunday’s Super Bowl.

“Kickoff. To be able to go down on kickoff and see all of the cameras flashing, that’s the stuff you see on TV as a kid,” he said. “I want to be there. That alone is something I’m looking forward to.”

He might not do it for his hometown team, but he can win a title for the area he still considers his hometown.

“If someone asks me where I’m from, I tell them the Pittsburgh area. If they’re from the area, then I tell them Canonsburg,” he said. “It’s easier to say. I feel like I have more leeway to say I’m from Pittsburgh because I have so much family in the Pennsylvania area. I have them in Woodland Hills. I have them in Braddock, Char Valley.”

There was a time in 2018 when he thought his opportunity in the NFL would come with the Steelers.

The Steelers showed an interest in the speedy linebacker, who was timed in the 4.6s in the 40-yard dash at the NFL Scouting Combine. They brought him in for a private visit prior to the draft. But the Chiefs took O’Daniel instead, despite not having shown quite as much interest.

Again, life had different plans for his journey.

“It would have been something that had come full circle,” O’Daniel said. “But I know in this league, guys say that the team you end up on is the team you least expected. That’s the way it was for me.”

Share
Tweet
Email
AB to JuJu: Tough love was for ‘the culture’
Schultz a game-time decision vs. Flyers