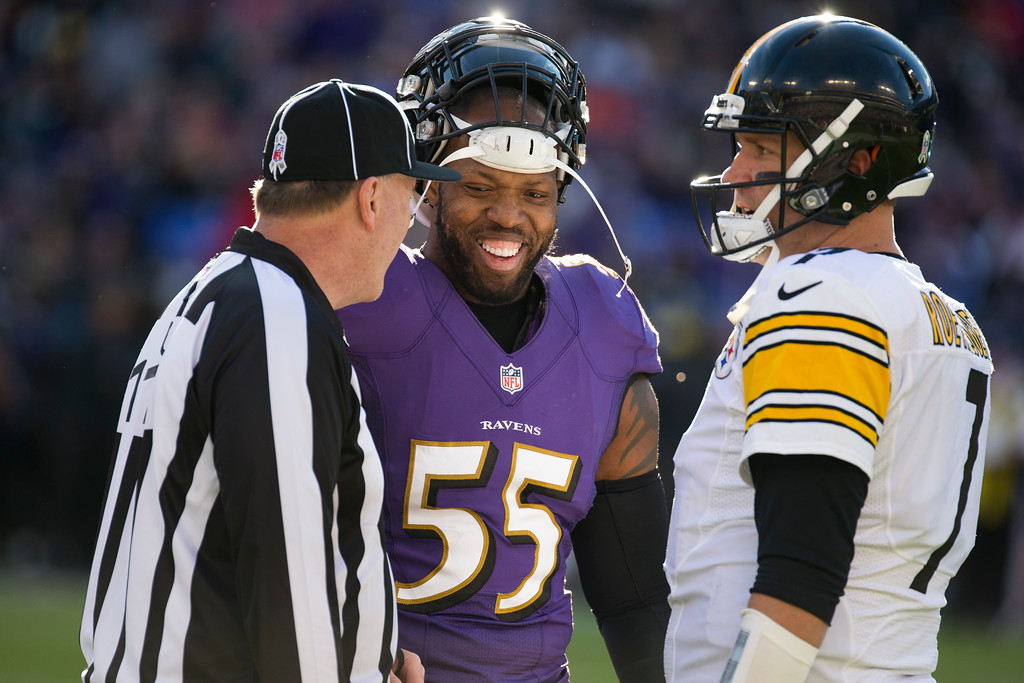 MIAMI -- Terrell Suggs might have been one of the most hated people in the NFL among Steelers fans at one point in his career.

But the 37-year-old defensive end has always been known as a straight shooter when it comes to speaking his mind.

Suggs, who is in his 17th season in the NFL, is getting a surprising shot at a second Super Bowl title with the Chiefs, who will play the 49ers here at Hard Rock Stadium Sunday. The longtime Ravens star is with a new team -- more on that in a bit -- but one thing has not changed, his respect for Steelers quarterback Ben Roethlisberger.

Roethlisberger missed most of the 2019 season with an elbow injury that required surgery. And with him soon to turn 38, some feel there's no way Roethlisberger will return and be effective in 2020.

"No. He's coming back," Suggs told me Wednesday when I asked if there was any doubt Roethlisberger would return. "A competitor like that, a warrior, he's not going to want to end his career on the sideline. I think he definitely comes back."

It would only be fitting. Much like Suggs coming back after being released earlier this season by the Cardinals, who signed him in free agency last offseason. A former NFL Defensive Player of the Year with the Ravens, Suggs and Roethlisberger had many battles against each other during their careers, which have largely overlapped.

And while the play on the field often got heated, Suggs and Roethlisberger always showed a great deal of respect for each other.

"We all know the history between the two teams," Suggs said. "That guy's made me level up, up my game a lot. I think he definitely comes back next year."

But will Suggs? He's not telling -- at least not now. But there was no doubt what Chiefs head coach Andy Reid had in mind when he placed a claim on Suggs following the defensive end's surprising release by the Cardinals Dec. 13. Reid wanted a guy with the kind of playoff experience Suggs has -- he owns 12.5 sacks in 20 career playoff games -- to add a veteran presence.

"Coach Reid called me and said, 'Why don't you come play for us and come along on this run?'" Suggs said. "It didn't take much convincing. My biggest fear was that I wasn't going to fit in. He said, 'Trust me, you're going to fit in here.'"

Suggs had 6.5 sacks this season, showing he can still get to the quarterback, something he's done 139 times in his career. Of those, 11.5 came against Roethlisberger, the most he sacked any quarterback in his career.

Both are likely headed to the Pro Football Hall of Fame, but Suggs isn't thinking about his legacy just yet. He wants to win another Super Bowl, something he did with the Ravens in 2012.

"I didn't really think of it like that," he said. "Once the story is told, it's a good thing to have in it. I haven't really thought of anything in regard to a legacy. I've got a game ahead of me and my opponent. Everything else, I'll leave that for y'all to write. I've got a football game to play."

He did, however, pause to reflect on his legacy when he learned Hall of Fame defensive end Chris Doleman had died during the night. Suggs ranks eighth in NFL history in sacks, with Doleman, who had 150 1/2 in his career, one of the few players who rank ahead of him.

Suggs, who was unaware Doleman had died, said the former Pitt and Vikings star was a player he looked up to while growing up in Minneapolis as a child.

"It's been a long week for sports. Chris Doleman was one of my childhood idols," Suggs said. "Coming out, I always wanted to wear 56. I wore 56 in pee-wee football because of Chris Doleman. He was part of that Tony Dungy defense. Oh man.

"I never met him but he was definitely one of my childhood idols. Him and Henry Thomas, John Randle, Jack Del Rio, that was a legendary defense to me. He's one of the reasons I started playing football and the reason I play defensive end."

It's something he'll do for at least one more game, though that wasn't certain after he was released by the Cardinals.

"If I was going to play, I was just hoping for a playoff team," Suggs said. "A lot of the (potential) playoff teams claimed me. I guess where the Chiefs fell in the pecking order, losing to Tennessee the previous week kind of edged Tennessee out.

"I never in a million years at the end of last year would have thought I'd be playing with the Chiefs in the Super Bowl. This part is shocking, but it's a good shocking."