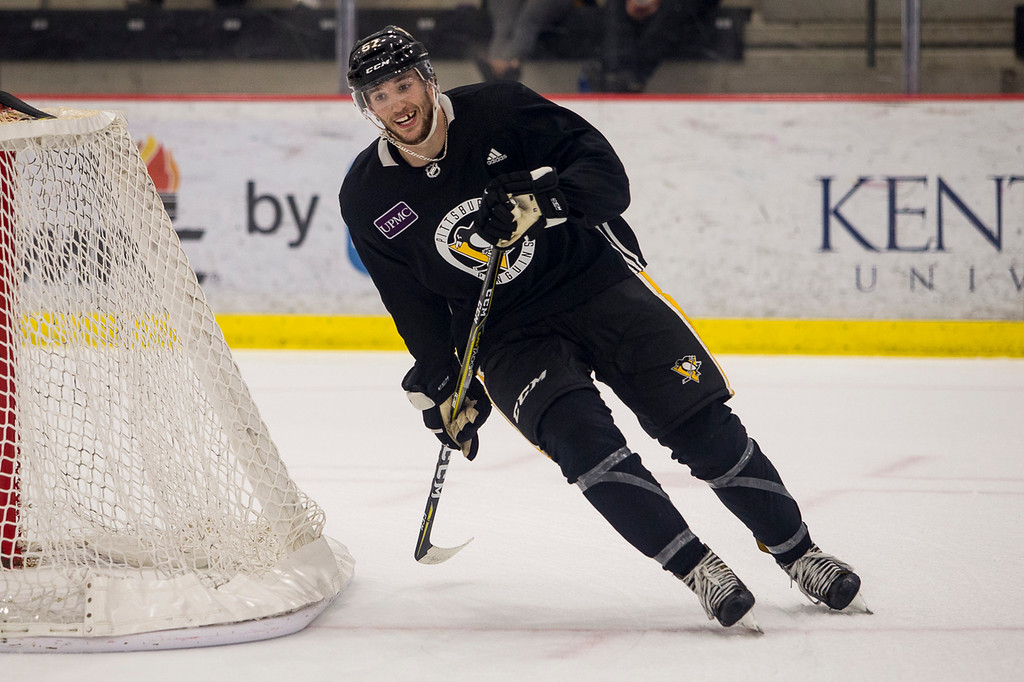 CRANBERRY, Pa. -- Forward Anthony Angello isn't quite sure yet how many family members and friends he'll have in attendance when the Penguins host the Flyers on Friday evening at PPG Paints Arena, he just knows it'll be a lot.

Angello, the Penguins' 2014 fifth-round pick, is set to make his NHL debut tonight.

"I was ecstatic," Angello said of the moment he got the phone call from Wilkes-Barre/Scranton head coach Mike Vellucci. "I saw coach Vellucci's name pop up, in the back of my head I had an inkling. When he told me I was getting called up I was really excited. I'm ready to compete, play hard, and leave it all out there."

It's no surprise that Angello was the next forward to get the call. Mike Sullivan said that from his conversations with Vellucci, he knows that Angello has “been one of their best players for quite some time now.”

Angello, playing in his second professional season, currently leads Wilkes-Barre in goals with 16, matching his rookie season's total in 20 fewer games. He plays a well-rounded game, too.

“I don’t read too much into points," he told me of his mentality last season. "I take pride in doing the little things right and playing the game the right way, and letting the points take care of themselves.”

At 6-foot-5, 210 pounds, Angello is now the biggest player the Penguins have on the active roster, and he knows how to throw his weight around:

“I think one thing that I focus on every game, along with shooting the puck, is just to get that first hit — whether it’s a big hit or a really solid one,” he told me last season. “It kind of gets me into the game from a physical aspect and it gets the other boys rolling. It’s a little bit of an intimidation factor — just playing physical, and letting the other team know that you’re there, you’re here to play, you’re here to compete. Mentally it’s an edge for yourself.”

That sort of presence is what Angello is looking to bring to the Penguins' lineup tonight against the Flyers.

"I just play simple hockey," he said on Thursday. "Move my feet, hard on pucks. I play a physical game, hard to play against. That's the recipe that got me here and that's the recipe I need to play here. I'm going to come out here, I'm not going to think, I'm going to play my game and let the rest take care of itself."

The sort of physical game Angello plays often leads to fights, but Angello prides himself in being smart about when he drops the gloves. He has no fighting majors this season, and just three last season. His first professional fight was last December against Ulf Samuelsson's kid, Phil, and Angello dropped the guy twice. He doesn't fight often, but when he does fight, he's skilled:

“I’ll go and hit those guys, and if someone wants to come up and challenge me, I’d rather play hockey and play on the ice," he said at the time of his philosophy. "If they want to fight me, they can drop their gloves first and take a two-minute instigator.”

Angello had a strong rookie season last year with that physical game, coupled with good production at 16 goals and 13 assists in 65 games, and he made great strides (literally, sort of) this year. Over the summer, he focused more on lower-body strength workouts to be stronger in his stride, stronger on pucks, and better at puck possession. Coming into this season, he also just felt more comfortable as a second-year pro.

"I'm a lot more confident," he told me Thursday. "The fear of the unknown is gone. I'm here to compete."

He's been in this Penguins locker room before for Penguins development camps. Now that he's here for real, surrounded by other NHL players, about to make his NHL debut, being in the room makes for a different feeling.

"It's extremely surreal," he said. "Getting drafted was something I'll never forget. Then, getting that phone call and actually being here is a whole 'nother animal. I worked really hard to get here, and I'm going to work really hard to stay here."