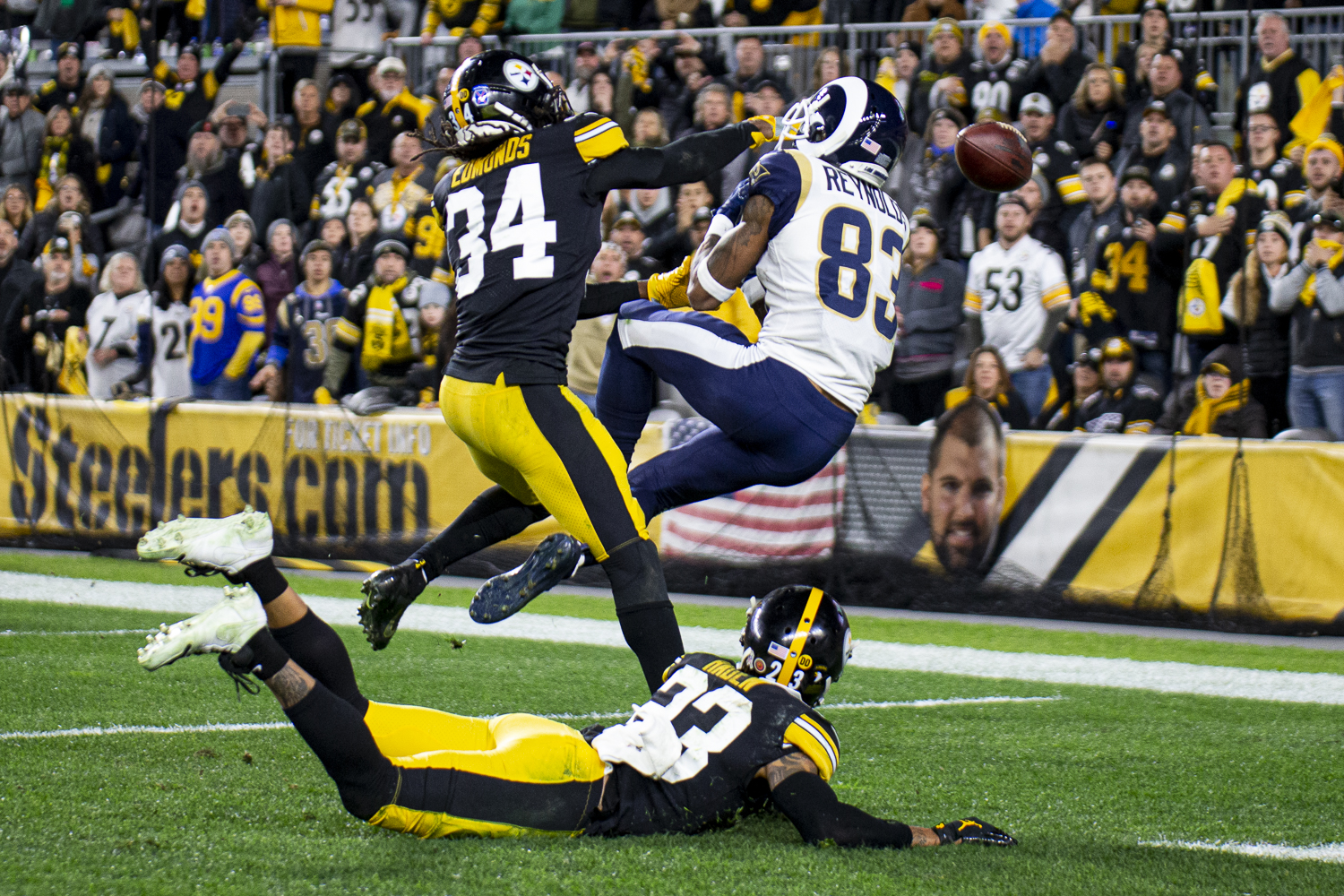 There’s an obvious lack of comfort by Edmunds in his skills to turn and find the ball while in coverage. He uses textbook techniques to find the ball without turning. One familiar phrase is to ‘fight through the hands’ when a defensive back’s back is to the ball and they react to the receiver they’re covering.

Terrell Edmunds didn’t record an interception in 2019, but he was able to grow in his understanding of the Steelers’ defense and how to be effective lining up in different spots.

I made my case for Minkah Fitzpatrick being the pillar which Keith Butler should build around because he’s the X-factor playmaker of the secondary. Edmunds isn’t that right now, and that’s fine. But he is a strong safety that looks like he’s understanding his role in the defense and how to play within the Xs and Os of the unit.

But the reality is that he still has a ways to go with his ball skills and that will be a factor in his game that gets pointed out until that changes. But here’s why there shouldn’t be any panic button for the Steelers to press and try to invest in another starting strong safety anytime soon:

That’s because Butler was comfortable lining him up all over the field and especially in the box. It’s a valuable trait, but he needs to do more in coverage as a safety.

The reality is that Edmunds allowed the seventh-highest passer rating to quarterbacks while being targeted. He allowed 36 catches on 50 targets for 514 yards and four touchdowns and a 131.6 passer rating.

But it’s also a reality that plenty of the plays he gave up weren’t because he was out of position, but because of great plays when he was in good position, or for lacking elite ball skills. Here’s the 28-yard touchdown he gave up to D.K. Metcalf from Russell Wilson. Edmunds is in man coverage in the slot and pushes Metcalf to the sideline with tight coverage, running in Metcalf’s hip pocket.

He even gets his hand up to challenge the pass, but Wilson threw the perfect ball and Metcalf proved why he was one of the most talked-about receivers of the 2019 draft class:

This wasn’t a play where Edmunds made a huge mistake. He was just beat by a perfect throw and catch. But that play does show a consistent theme in his skillset. Edmunds is very good at sticking to his assignment and running to be in position. He’s a heck of an athlete with impressive burst that lets him quickly close down passing windows.

There’s an obvious lack of comfort by Edmunds in his skills to turn and find the ball while in coverage, though. He uses textbook techniques to find the ball without turning. One familiar phrase is to “fight through the hands” when a DB’s back is to the ball and they react to the receiver they’re covering.

Watch how Edmunds does that perfectly against Josh Reynolds and saves a touchdown pass from Jared Goff. He turns and runs with Reynolds and puts his hands right in between Reynolds’ just before the ball arrives. Doing this avoids face-guarding pass interference calls because he’s not blindly swiping to disrupt Reynolds’ vision and isn’t as easy to call when you aren’t actually interfering with the receiver:

But sometimes those same tactics I mentioned of covering with his back to the ball will backfire. Watch how he shows a similar approach to covering Robbie Anderson up the seam. Edmunds has underneath zone coverage and has to turn and run to help Joe Haden cover Anderson. He gets inside of Anderson to force a great throw from Sam Darnold:

It’s not bad coverage, but you do want a first-round pick to improve from the level Edmunds is at. There’s no reason to think he can’t — and not just because he turned 23 years old last week. The biggest reason is because of how he’s challenged passes around the field.

Watch how he blankets Jack Doyle on a two-point conversion. Edmunds engages Doyle right at the goal line and turns to run as soon as he breaks to the sideline on the quick out. When Jacoby Brissett throws the ball, Edmunds is right there to break it up:

That break up ended up being a huge deal, as the Steelers won 26-24 over the Colts and saw them miss a field goal late in the fourth quarter. Edmunds is up to the challenge of playing in tough positions and not shying away from making tough reads and challenging passes.

Watch how he plays this corner route to Hunter Henry where he almost intercepts the pass but ultimately only cuts off the throw Phillip Rivers thought he had with a quick burst:

Yes, that’s another example of his lack of ball skills, but it’s also a showcase of good instincts from playing safety. He knows the Xs and Os of the game and has the footwork and technique to run, cover and tackle at the onset of a play. He just needs to work on his ball skills and finishing plays with a chance to create turnovers.

He knows that too, as he told me multiple times during the season when I asked about what he thought of his own play. Let’s see how much improvement he has this offseason as he enters his third year in the NFL. It could very well be a defining factor in Edmunds’ young career.

If you want to hear more from me on the subject, I talked about Edmunds’ progress with the team on my Locked on Steelers podcast this week. You can listen here: