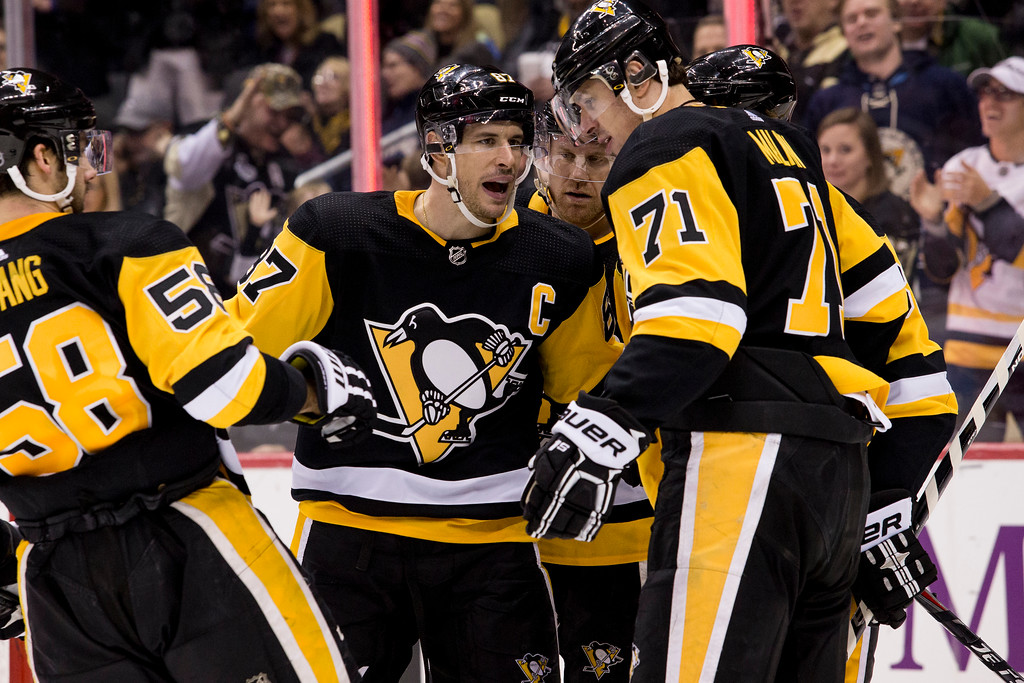 TAMPA, Fla. -- The Penguins' power play can be a weapon with few equals, a strike force capable of altering the course of a game with a breathtaking burst of skill and teamwork.

Of course, it also can be what it was during their 4-3 victory in Washington Sunday.

Which is to say, ineffective at some times, downright invisible at others.

That is why, before the Penguins went onto the ice for a practice at Amalie Arena Wednesday afternoon, Mike Sullivan had members of his power play watch video of their work against the Capitals.

Not as punishment, although it might have seemed that way, but so that they could recognize the mistakes they made at Capital One Arena and try to avoid repeating them when the Penguins face Tampa Bay Thursday at 7:08 p.m. at Amalie Arena.

He characterized the video session as "fairly lengthy," and seemed pleased with the way his players reacted to it.

"I like how engaged the group is at trying to problem-solve and make sure we all get on the same page," he said. "When they're on and they execute, they're a dynamic power play."

Which is what one would expect of a No. 1 unit featuring Sidney Crosby, Evgeni Malkin and Kris Letang, along with Bryan Rust and Patric Hornqvist. Having Jake Guentzel, who is recovering from shoulder surgery, would add a dimension to the group, but it's hardly bereft of talent without him.

Then again, it's possible that having so much skill actually works against the Penguins at times, and not only because they might be tempted to make a pretty, but low-percentage, play on occasion.

"We have so much talent that often we wait for one of our top players to make an incredible play," Letang said.

The best power plays in the NHL convert around, if not over, 25 percent of their chances. The Penguins are capitalizing on just 19.9 percent, which is why they are marooned in the middle of the league rankings.

And while power plays are notoriously cyclical, the Penguins' production with the man-advantage has been an all-or-nothing proposition lately: They have two power-play goals in four of their past eight games, none in the other four.

Just about everything was, at one time or another, in Washington. There were times when the Penguins struggled to get into the attacking zone and when they managed to, the Capitals caused problems and created turnovers with their high-pressure approach to penalty-killing.

The power play's continuity has been one of the victims of the Penguins' numerous injuries to key personnel this season, as everyone who logs significant time on the top unit has been sidelined for a significant stretch.

"It's tough when you have so many people going in and out," Letang said.

For now, at least, everyone except Guentzel is healthy and available, which gives the Penguins reason to think that whatever is preventing their power play from reaching its potential on a regular basis can be addressed before the regular season is over.

"We see our mistakes," Malkin said. "We need to support each other more. We need to shoot more (from the points). Small things. We'll fix it, for sure, before the playoffs."

• Here are the Penguins' personnel combinations during practice:

The extras were forward Andrew Agozzino and defenseman Juuso Riikola.

• Rust, who did not go on the ice for the Penguins' practice Monday, was a full participant in the workout.

• Tampa Bay's Andrei Vasilevskiy is 14-0-2 in his past 16 appearances, tying the Lightning record for points earned in consecutive games by a goaltender. It was set by Nikolai Khabibulin in 2003.

Share
Tweet
Email
Drive to the Net: Murray not living up to expectations
Brown offers apologies to Steelers all around