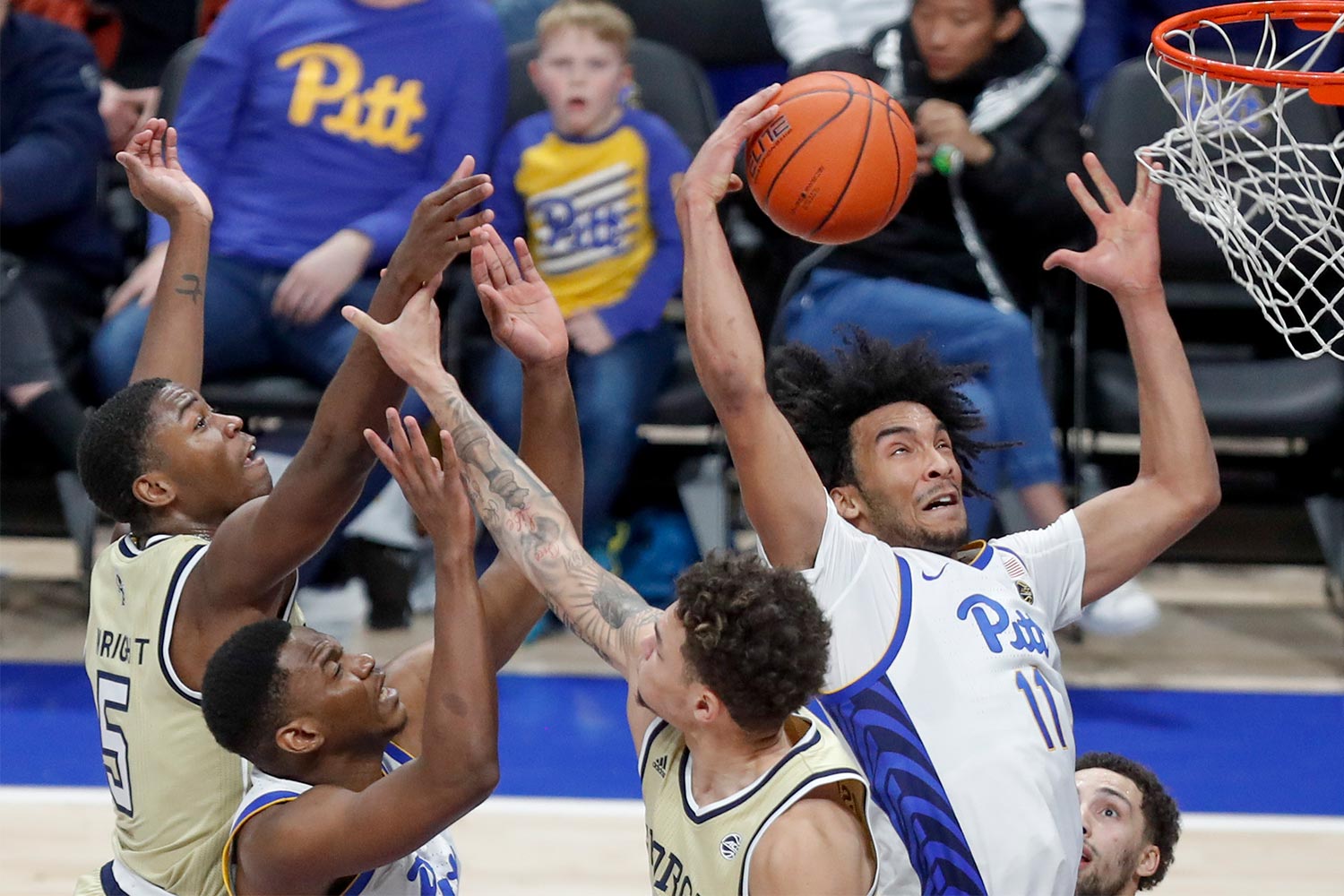 That's Pitt freshman Justin Champagnie scoring a career-high 30 points Saturday in the Panthers' 73-64 win over Georgia Tech, fueling his squad to a 15-9 record on the year and a 6-7 mark in ACC play. And it's not just that Champagnie was scoring the ball. It's how he scored the ball: Dunks, threes, baseline layups, putbacks on the offensive glass — Champagnie did it all on this afternoon at Petersen Events Center.

“I just felt like I was flying," Champagnie was saying at the podium post-game.

Then he said something even more important.

"I could’ve made some more — the one to get him [points to Trey McGowens one seat over] his 10th assist, but I just felt good," he continued. "I was flowing. I was doing what I’m supposed to do.”

Let's run another example for you, because Champagnie's performance after the game was just as impressive as his work on the hardwood on this Saturday in the Steel City. After Gerald Drumgoole replaced him late in the game, Champagnie received a standing ovation from the rowdy crowd on-hand, and Jeff Capel pulled him in for a hug and some words of encouragement before he took his seat on the bench.

The Pete was rockin', and it was all for the freshman.

“I mean, it was a great moment for me," Champagnie said. "It’s also a real big confidence booster."

"At the same time, it’s on to the next game," Champagnie added. "I can’t just dwell on me having a good game this game. My teammates expect me to play good.”

There it is. Champagnie, in both instances, was quick to offer either a critique of his game or to mention how he needs to move on from this 30-point, nine-rebound, two-steal, one-block, zero-turnover showing. Forget that he was the only Panther knocking down shots consistently — he went 12 for 17 from the field (3 for 4 from three) and a perfect 3 for 3 from the free-throw line. For context, the team shot 42 percent overall and 31 percent — 5 for 16 — from three. Eliminate Champagnie, and those numbers plummet.

So there were reasons for smiles and for soaking it all in — which Champagnie did, to be clear. But he also showcased a sense of awareness, understanding that his journey doesn't end here. Hell, it's barely begun.

"As long as he’s willing to work — which I think he will [be] — then he has a chance to continue to get better," Capel was saying of Champagnie.

Even Georgia Tech coach Josh Pastner got in on the praise.

"One thing is, he [Champagnie] can really shoot the ball because he’s spacing the floor," Pastner said. "That middle shot is a hard shot. It’s not an easy shot … It’s a tougher shot, and he made some tough ones. He’s a good basketball player. And he had some big offensive rebounds too."

That offensive rebounding — Champagnie led the Panthers with four — might just overshadow the scoring for me today, especially when you consider the one at the end of that gif up there. It's the same one in the photo atop this article. You know, the one where Champagnie looks possessed and willing to do whatever it takes to secure the ball among a swarm of Yellow Jackets.

“I just knew the big wasn’t going to move," Champagnie was saying of the play. "He was going to just go for the rebound. I just kind of picked it apart and got the rebound.”

That sequence came with 2:30 left in the game, Pitt up seven and looking to ice their fourth consecutive ACC win at home. Xavier Johnson missed the jumper, but there was Champagnie, crashing and scoring, because of course he was. This was his day, and seemingly everything he did on the court netted a positive result.

I asked him if anything felt different before the game, if he knew there was something special brewing:

“Nah, I just had a conversation with coach after the Notre Dame game," Champagnie said. "He was just like [telling me] I had 20 [points] and 11 [rebounds] and I only played basically in the second half. I only woke up in the second half. He just told me to come out here and bring the energy and don’t have an on and off switch. Just come out from the jump and just play, play my game and everything will come to me. So that’s what I did.”

That won't be Champagnie's last 30-point effort in the blue and gold. Bet on it.