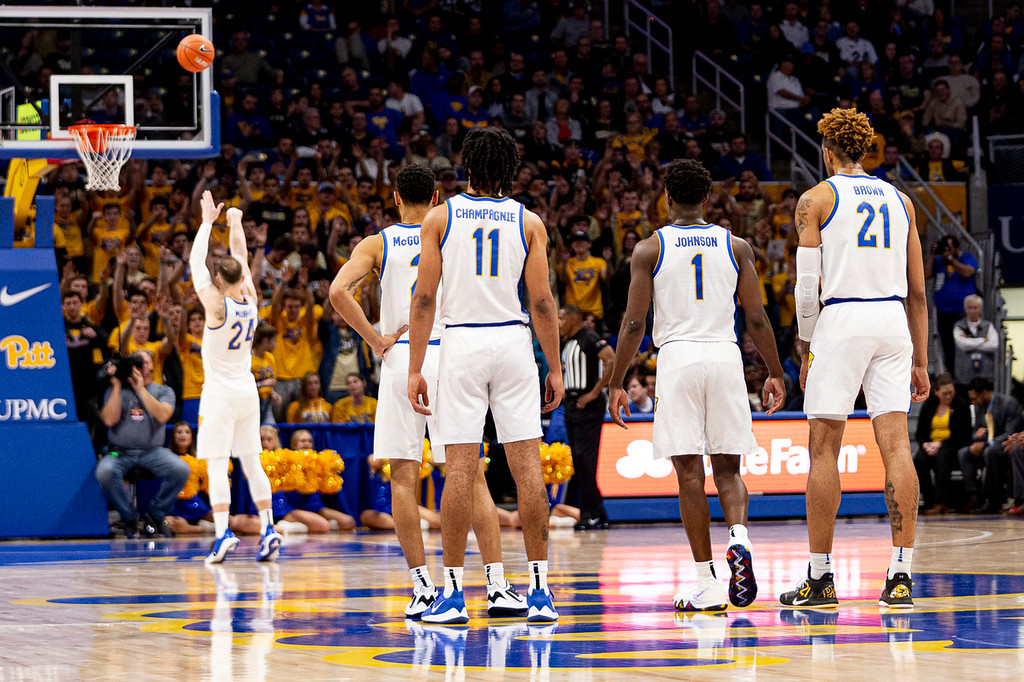 You couldn't blame Xavier Johnson and Trey McGowens for feeling a little jealousy toward Justin Champagnie.

I mean, just compare their paths: Johnson and McGowens entered the unknown during their freshman seasons at Pitt in 2018. There was a new coach in Jeff Capel. There was the lingering stink of the old guy, plus angry fans at every turn. Capel strolled into a mob, and Johnson and McGowens were called to flank him on the frontlines.

They showed off, too, emerging as two bright spots on a 14-19 squad that went just 3-15 in ACC play. It looks bad — and it was — but the team went just 8-24 with an 0-18 mark in conference play the year before under Kevin Stallings.

And yet, the strain on Johnson and McGowens was real, even bleeding into various performances this season. At times, the now-sophomore guards will barrel into the lane, over-dribble or ignore an easy pass in favor of a heroic, trying-too-much shot attempt. It's plagued the team at times.

It's also slowly coming to an end — and a huge reason for that is the continued progression of Au'Diese Toney, the arrival of Ryan Murphy and, of course, the rapidly rising star of the freshman Champagnie.

"It's a sigh of relief, for real," Johnson said of his new teammates on campus at the Pete. "Because last year, it was just me going and that's my game, but I don't [want to do that] every play. This year, it's relieving because now Au'Diese is shooting the ball. Justin's shooting it well, and we have Murph when he comes back. So we have shooters, dudes who are ready to catch and shoot."

It's not like Johnson and McGowens weren't up to the task last year, either. Johnson led the team with 15.5 points per game and 4.5 assists per game in his freshman campaign, while McGowens averaged 11.6 per contest, just behind senior Jared Wilson-Frame's 12.7 points-per-game clip.

This year, though, the team has four players averaging double figures — McGowens, Champagnie, Johnson and Murphy — and that fact is fundamentally changing the way this Pitt offense operates.

"I mean, that's a big relief coming into this season," McGowens was saying. "Of course you want to lose yourself into the team, but there's always the pressure that if you don't do good or score — because you feel like your team's going to rely on you so much and you feel like that's your role — that if you don't score, the chances [of winning] are decreased by a lot. So just having Justin playing well, it just takes a lot of stress of us where we can just pass, not force things, stuff like that."

Champagnie isn't just "playing well," though. He's slowly becoming a bonafide star in the ACC. He's won ACC Freshman of the Week honors three times, his latest coming after Pitt's most recent seven-day stretch that saw him put up 20 points and 11 rebounds in a loss at Notre Dame then bounce back with a career-high 30 points against Georgia Tech in a win at home.

That 30-point mark is special, too, not just for the roundness of it all, but for the significance. Only three freshmen in the team's history have hit the mark ...

... and they're all players on this team, recruited by Capel and company. The point isn't lost on McGowens who offered the following response with a laugh when probed on the subject: