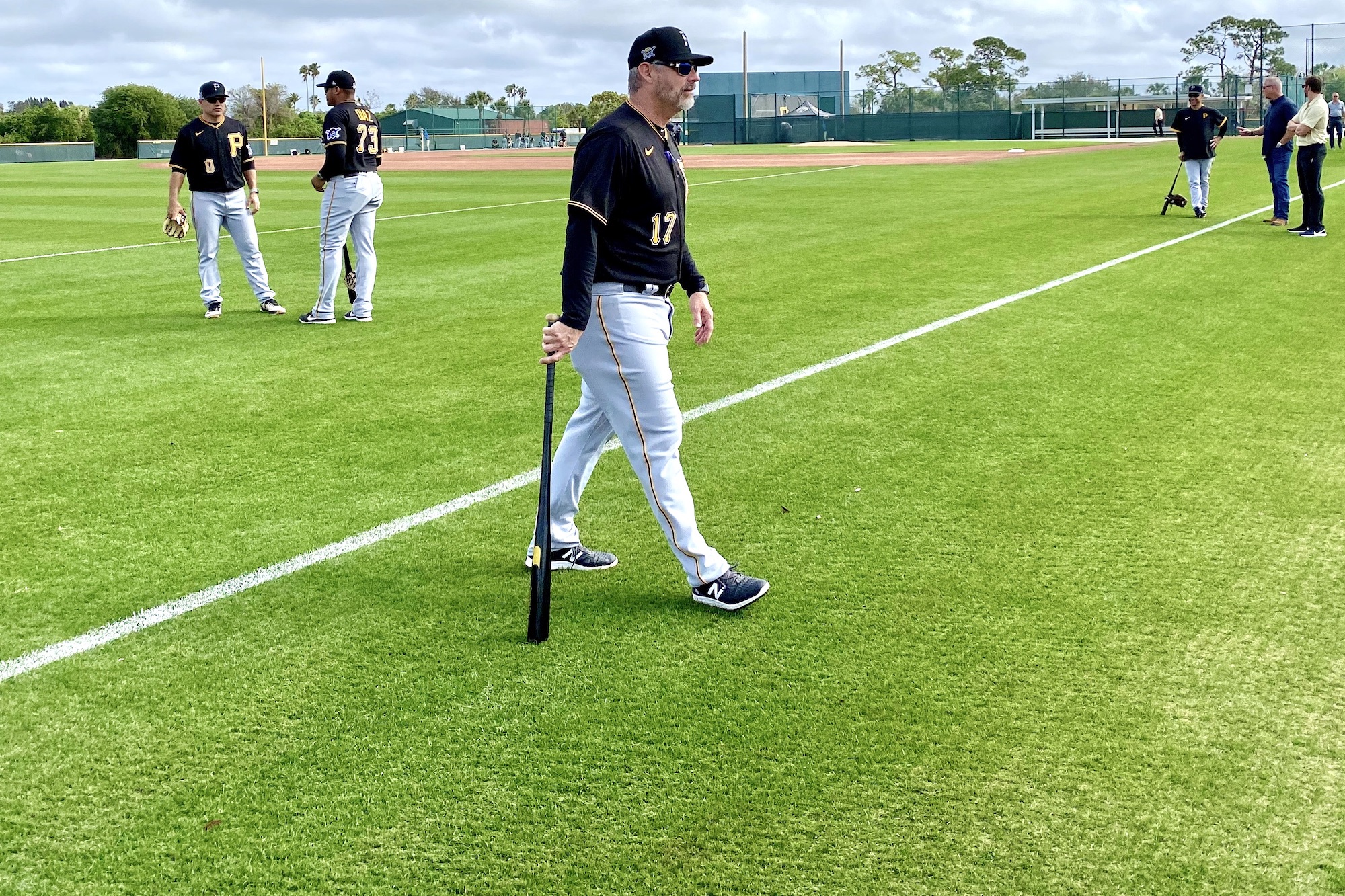 Me, I'll stand in line for the latter.

All summer long and far into the future.

Go ahead and give it a look and listen ...

... but even that won't do it justice. First round, he'd made up his mind to pull, then launched three prodigious blasts into the tall palms beyond left field, prompting at least one visitor in the parking lot out there to panic. Second round, the one I captured above, he'd go around the world with another into those palms, another off the batter's eye, a third to the opposite field.

To which Cole Tucker, who'd gone just before, could only shake that big hair and offer, "Dude."

Because here's my biggest, broadest impression from this Wednesday on which the pitchers and catchers took the field for their first workouts on Derek Shelton's first day in uniform and Ben Cherington's first day of witnessing the roster he's been charged with carving into a contender: There's nothing to rebuild.

At least not at the Pittsburgh level.

But I've also come to know and appreciate that Shelton, Cherington and Travis Williams didn't come here to lose. Or to be Bob Nutting's stooges and help him shove wheelbarrows of cash up to Seven Springs. I've talked with all three. I believe all of them when they speak with conviction that they wouldn't have left their previous positions -- all of them good jobs with good organizations -- if they hadn't received assurances that they'd have a real chance to contend.

Yes, payroll assurances, too. And knowing Williams, the lifelong lawyer whose passion was cultivated in the Mario Lemieux environs across the river, I'd dare say he got his in writing.

Going further, I can guarantee, based on everything I've learned here, that the baseball plan that's in place is one that's been put together not by Nutting, not even by Williams -- he's hardly a meddler like his GM-wannabe predecessor Frank Coonelly --  but by Cherington at the roster level, by Shelton at the field level and by absolutely no one else.

So, what is that plan?

And why is it there's already an apparent disconnect between the team and the public on this important count?

To be honest, that was my primary objective in being down here for the very birth of this process. I didn't want to find out after the fact, after it's been polished. I wanted to get the best possible sense for the plan at its foundation.

And here it is, in three steps:

"It's just about getting better," as Cherington told me. "It's not about building or rebuilding or labels. It's about working with the players we have to make them be the best they can be, and it's about adding more players, more talent everywhere we can."

Now, if Cherington had laid it out this clearly back when he was hired, and the fan base was still celebrating the firings of Coonelly, Neal Huntington and company, that might have caught on. But he understandably wasn't in a position to make any grand declarations upon taking the job, not without a hard look at the organization as a whole. And in the interim, his highest-profile move, of course, was to trade Starling Marte for two 19-year-old prospects and, along the way, lower payroll to an awful $50.1 million, so that's the impression that's resonated.

Hey, if it looks and smells like a rebuild, even after a single move, it must be a rebuild, right?

Which swings me back to Reynolds: He's 25. He was among Major League Baseball's best rookies in 2019 and, being a rookie, that means he's still got five more years of Pittsburgh control. Can't become a free agent for half a decade.

"Dude" has his head screwed on straight, too. When I kiddingly asked if he'd become full of himself over the offseason, he came right back with that Johnny Cash baritone, "Naw, man, I'm just looking to play better, keep working."

Know which kind of players a rebuilding team would covet most?

Kevin Newman's 26. He was arguably every bit as good as Reynolds as a rookie, he's also got five more years of Pittsburgh control.

Tucker and Ke'Bryan Hayes are both 23. They'll be the left side of the infield as soon as this summer.

"I'm stoked!" Tucker exclaimed in his inimitable way. "Big year for all of us!"

"It's just good to be here," Hayes, the spring star a year ago, said.

Mitch Keller's also 23. He told me here this week he expects to be nothing less than the ace of this staff before long, and his pedigree supports it.

"I know what this team wants from me, and I want it myself," he told me. "I've been that pitcher at every level, and I've got to be that same pitcher here."

Does anyone really want to go for the mega-rebuild and watch them become sensations in St. Louis or St. Pete?

No one on this roster is older than Chris Archer, 31, and most of the rest are in their late 20s, which is still young in baseball years. That goes for the others in the rotation, most prominently, in Trevor Williams, Joe Musgrove and Steven Brault, but also for Josh Bell, who's 27 and still has three years of control.

Three years, by the way, that likely will represent the prime of his career.

To repeat, these are the players that rebuilding teams hope to add, not subtract.

Listen to Shelton on this:

"I'm excited about our group," he replied to my question. "I think we've got a good, young core, and I think we build off that."

Whether that's understood or not, embraced or not, that really is the plan. It's not Syd Thrift instantly 'resurrecting the dead' with mega-trades. It's not the Cam Bonifay 'five-year plan' that slashed payroll to seven digits. And it's definitely not Huntington flailing all over the place from trading one key piece for prospects, another for 'major-league ready' mediocrity, yet another for ... oh, however anyone would care to label the Archer debacle.

This one's simple and clear: Maximize the assets at hand, move them when appropriate for prospects that strengthen the system for the long haul and, within that, apply the savings from the current payroll when contention's at hand.

I've found out down here that Cherington and Shelton have actually discussed all of this with some of the clubhouse's most important players. At length. Laying it all out there. Even the payroll.

"We know what's going on, what the vision is," Musgrove told me. "We expect to be part of a winning team here, because we know that part is mostly about us getting better as individuals and as a group. We believe that we can do that. And we believe that, when we do, they'll have our backs."

I do, too. For now. Because I've got no reason not to.

I'll repeat for the billionth time that Nutting blew it following the 2015 season by not raising payroll for a 98-win team. It's something I've spoken directly to him. Even if Coonelly and Huntington were at fault -- and I don't know that they were or weren't -- it's ultimately on the owner to mandate going for it. Nutting didn't, and thus it's on him.

Next time, it'd be on him again, but he's assuring that won't be the case. We'll see.

As far as the rest, though, they're new. And to reiterate, they came here with assurances they'd be able to do as they wished toward building a sustainable winner. That's what's at hand. Cherington isn't excessively investing up front in a roster he can't -- and shouldn't -- fully trust yet after a 93-loss collapse. So he's hedging, as he'll do with the decidedly uninspired pending signing of Jarrod Dyson, even as he moved his main asset to begin working on the minors. And at the same time he's hedging, he's also betting that more can be culled from the current players.

Ask me, and that seems smart. The collapse was immense and indefensible. But through the All-Star break, the Pirates were damned competitive with essentially the same group plus Marte and Felipe Vazquez. They can be that again, presuming Gregory Polanco is, indeed, fully recovered and a few other factors. I'd additionally argue that the remaining group figures to be improved with superior instruction, at least to hear them tell it.

"There's no question in my mind you're going to see players get better. And I mean right away," Kyle Crick was telling me. "There's been more talent here than I think people maybe realized, and it's going to shock some people when we bring it out."

Maybe it will. Maybe it won't. Again, we'll see.

But speaking only for myself, my dream scenario all along was that the old front office would be fired, that a new one would produce a plan precisely like this, that the current young core would be given a chance to mature in Pittsburgh rather than elsewhere, and that somehow all of that could blissfully converge with the system becoming stronger.

Hell yes. But hey, it’s springtime for this franchise in more ways than one, and it's been way too long since that's been part of this particular scene.