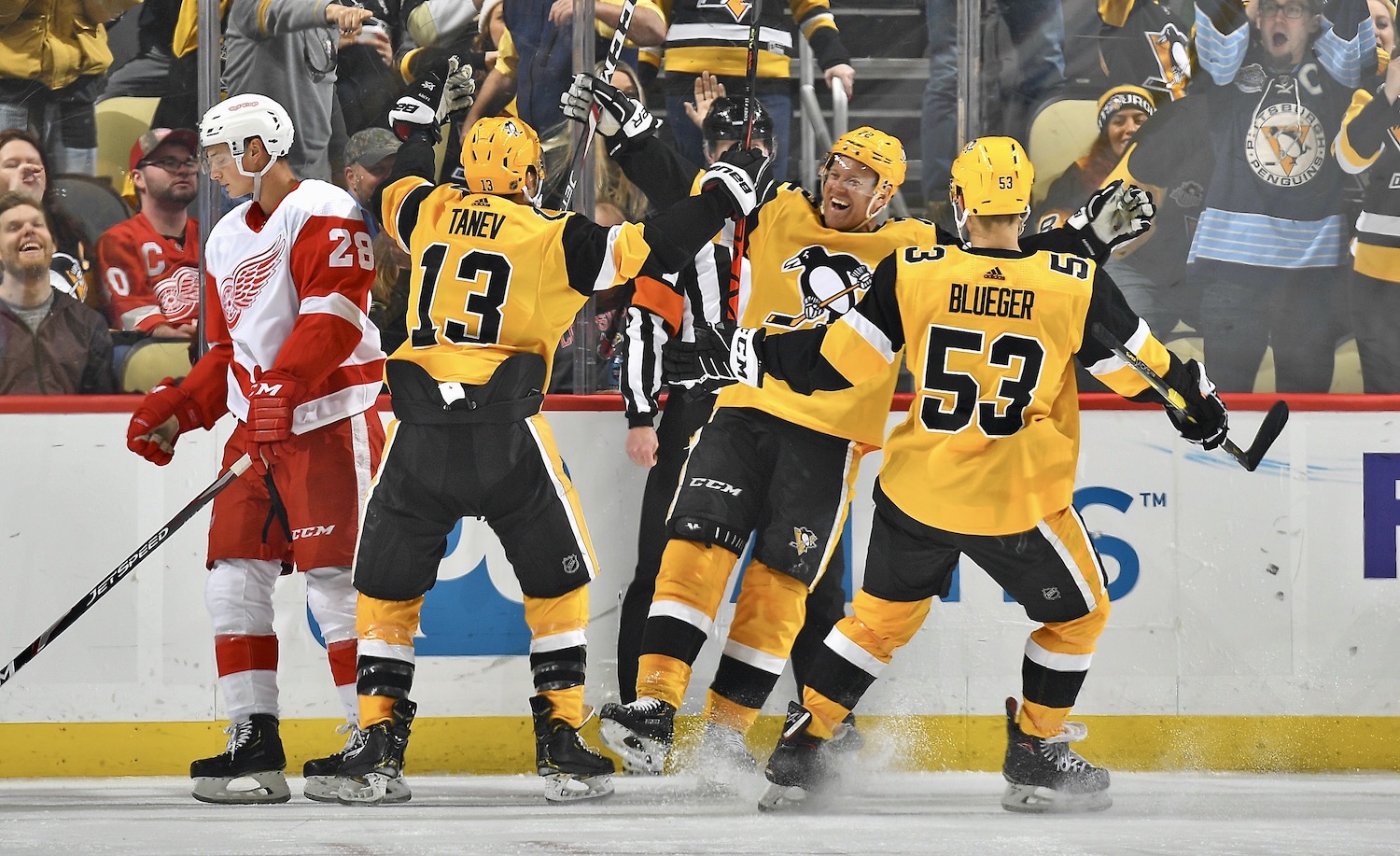 Patric Hornqvist nearly had a hat trick in Saturday's 5-1 win over the Red Wings.

After Valtteri Filppula opened the scoring for the Red Wings 5:37 into the game, the Penguins tied the game after a flurry of activity in the crease:

Hornqvist thought the goal was his and led the handshake line. When the goal was announced, though, it was credited to Sam Lafferty instead.

Shortly after, the in-house scorers reviewed the footage and credited the goal to Hornqvist. After the game, Hornqvist was if he knew for sure if the first goal was his.

Hornqvist added two more goals in the second period, and hats rained down:

"I thought I was going to shoot, I didn't know where to go," Hornqvist said of that one. "Hopefully the goalie doesn't know either."

At the time of his last goal, Hornqvist was filling in on the third line alongside Brandon Tanev and Teddy Blueger after Zach Aston-Reese exited the game with a lower-body injury.

"Tanev and Teddy made good plays," Hornqvist said of the goal. "I got the puck too much to my right, so I went low glove and it went in."

"It feels good to score three goals," Hornqvist said after the game. "The first one I got kind of lucky, but the other two were nice goals. Sometimes you get lucky out there and keep shooting, and still find the back of the net. It was one of those afternoons."

After the Penguins' locker room availability concluded, the league announced that it had reversed the in-house's ruling on the first goal and credited the goal back to Lafferty.

I'm still not sure about the league's ruling, and the in-arena scorers would have had to be pretty confident in what they saw to make the switch from Lafferty to Hornqvist in the first place.

Questionable call aside, it was still a huge game for Hornqvist and the entire fourth line.

In addition to Hornqvist's two goals, he assisted on Kris Letang's first-period power play goal, and was just buzzing around the net as usual. The Penguins only recorded seven close-distance, high-danger shots all game, and three of them were Hornqvist's Lafferty chipped in with his goal, and Andrew Agozzino had his biggest game of the season -- one assist, a team-leading three hits, and two takeaways, tied for the team lead.

It's hard to say what the Penguins' lines will look like once the injured forwards Dominik Kahun and Nick Bjugstad return. But for the time being, it's good to see contributions coming from all throughout the lineup.

• Before the game the Penguins honored Damien Gabis, a member of the Pittsburgh Warriors Disabled Veterans Hockey Team. Gabis is a Purple Heart recipient from his time in Afghanistan.

• Bryan Rust has had a large group of what appear to be family and friends in town this week.

• No surprises here, but Hornqvist had the firefighter helmet in his stall after the game.

• Jason Zucker's wife Carly and their two youngest kids are still in town. When they made the trip here on Feb. 14, Carly joked on Twitter that Zucker was the only man who could keep her away from Bret Michaels. I was chatting with Zucker, and he said Carly was scheduled to meet Michaels when he was performing at a Minnesota casino that day. He joked that the trade ruined the moment for her.

• After the game, Anthony Angello came into the locker room and sat with Hornqvist in his stall and the two talked on their own for a little while.

• The website Man-Games Lost goes beyond tracking just the straight number of games lost due to illness or injury, a list on which the Penguins rank fourth in the league and the Red Wings rank third.

They also have a weighted list that takes into account the average ice time of the skater lost. On that list, the Penguins rank first, and the Red Wings rank third. So while the Penguins haven't had as many straight man games lost due to illness or injury, they've lost more significant players than anyone else.

• Before the first goal was switched from Hornqvist back to Lafferty, Agozzino had two assists in the game, which would have tied a career-high in points for him. He previously scored a goal and an assist on Feb. 18, 2019 in an Avalanche win over the Golden Knights. When the goal was changed back to Lafferty, it was changed to unassisted, so Agozzino went back to one point.

• Brandon Tanev was on the ice for 11 shot attempts for and just three against, a ratio that was 25.24 percent higher than when he was not on the ice.

• Letang extended his point streak to five games with his power play goal. The goal was his sixth power play goal of the season, which ranks second among all NHL defensemen.

• The Penguins now trail the Capitals by one point with a game in hand.

• Malkin (896) is 19 games away from tying Mario Lemieux (915) for second all-time in Penguins franchise history in games played.

• Crosby (315) is five even strength goals away from tying Jagr (320) for second all-time in franchise history.

• Matt Murray (192) is four games away from tying Les Binkley (196) for fifth all-time in franchise history in games played by a goaltender.

• Hornqvist's two goals gave him 129 career goals with the Penguins, three shy of Bob Errey for No. 19 all-time in franchise history.

• Murray on the Red Wings: "They're still a good hockey team. They dangerous off the rush, they're skilled offensively. It doesn't matter who the opponent is. Anybody can beat anybody in this league. I think we did a good job. ... They got a lot of skill up front for sure. That team, they're dangerous. They showed it in the first."

• Tanev on the team moving within a point of the Capitals: "We know it's a pretty tight division in the standings, but we don't look at that stuff necessarily. It's more concentrating on our game, going out there, and doing whatever it takes to get two points."

• Dylan Larkin on things not getting any easier: "The schedule this month, we knew coming in that it's time where we're in the thick of it with how many games we have. We have to find a way to get some wins and win together and get on a little streak. Right now, the streak's going the other way. I think we need to get back home and grind out a win."

• Filip Hronek left the game in the second period after being hit with a shot in the side of the head, and was still being evaluated after the game. Scary moment: