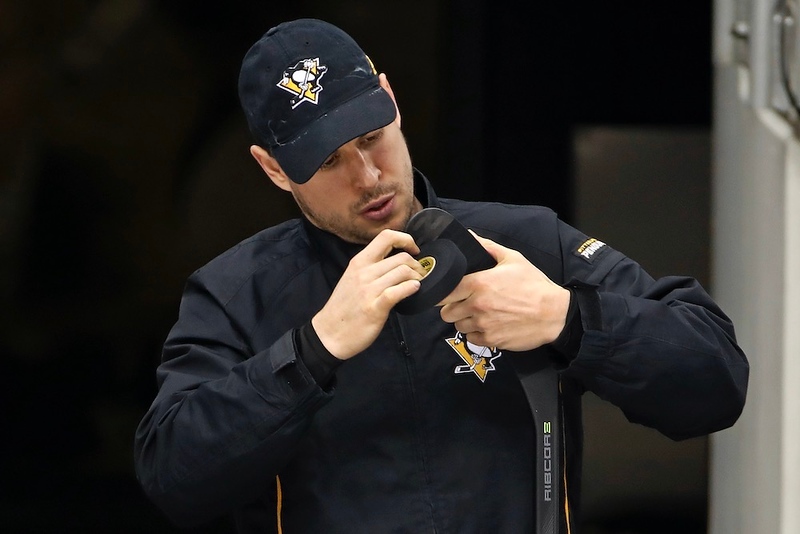 You can go from the heel to the toe, or toe to the heel. You can use black tape, white tape, a mix of the two, or something completely different. Usually, players will cover most of the blade when taping their stick. Some players like to mix it up.

Looking around the Penguins' locker room, nobody on the current NHL roster does anything too unusual when taping their stick. I asked a couple of guys in the locker room about the weirdest or most interesting tape job they've seen, be it on their own team or from an opponent.

"In our team we have pretty same, basic stuff," Juuso Riikola said. "I remember some guys have done space between tape, like stripes? That's pretty weird."

"David Pastrnak from Boston," said Dominik Kahun. "He just doesn't put much on there. He goes like here, here, here," he explained, using his hand to represent the blade and drawing out three separate lines across his hand. 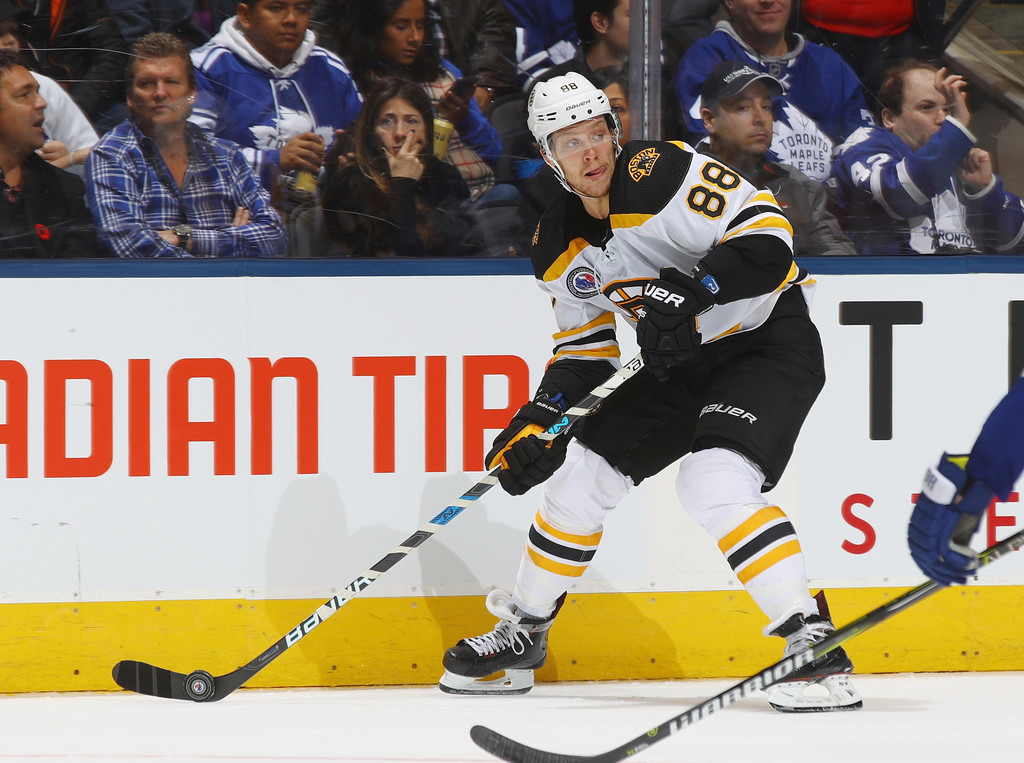 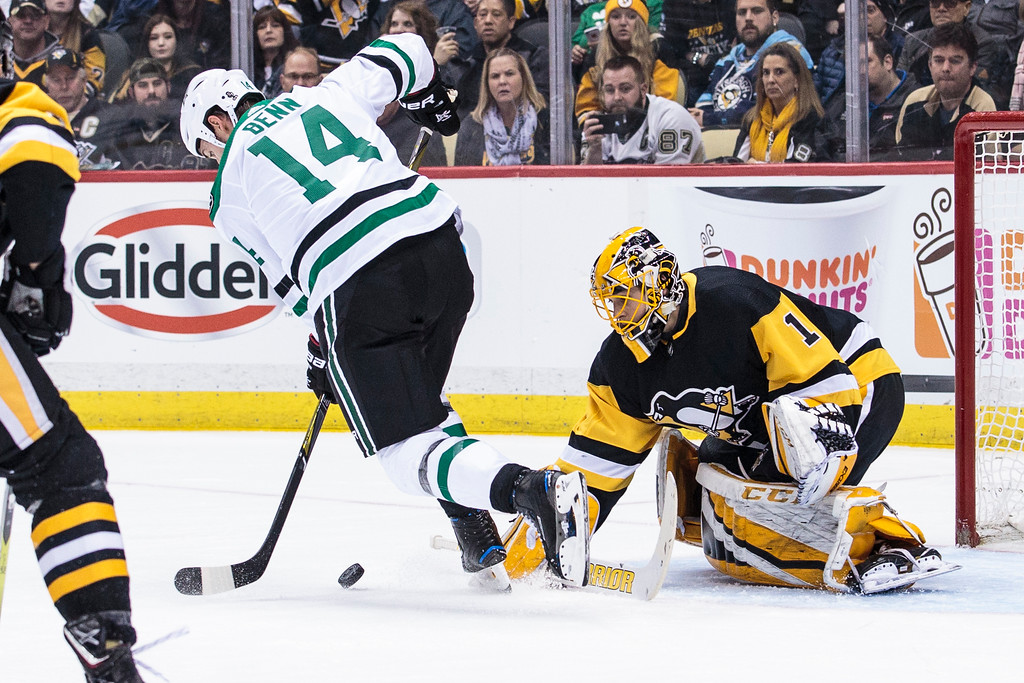 "I think it's just a comfort thing," Rust said of the different patterns. "Whatever guys are comfortable with, or what they're used to using. I think it gives them more confidence on the ice."

In other words, Pastrnak's tape probably had nothing to do with his ability to make plays like this:

"I've seen Pastrnak, he has a pretty weird one," Marcus Pettersson said. "And I don't know if (Kevin) Fiala does it anymore, but when we played in the Swedish league together he used to have a stripe on the bottom, just one stripe."

I looked into it, and Fiala tapes his full stick now. But when he broke into the league in 2015 he was using the minimal single stripe: 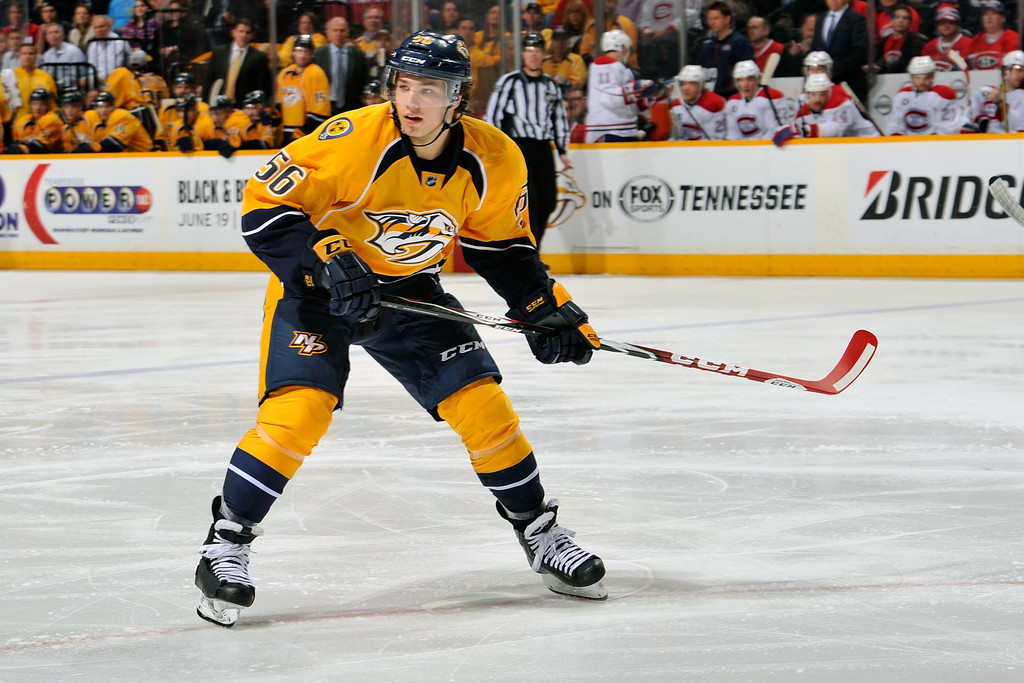 "I don't know if (Nikita) Gusev does it now, but I've seen it before where the tape is not close together, there's like gaps in-between," Teddy Blueger said. "It's like a zebra." 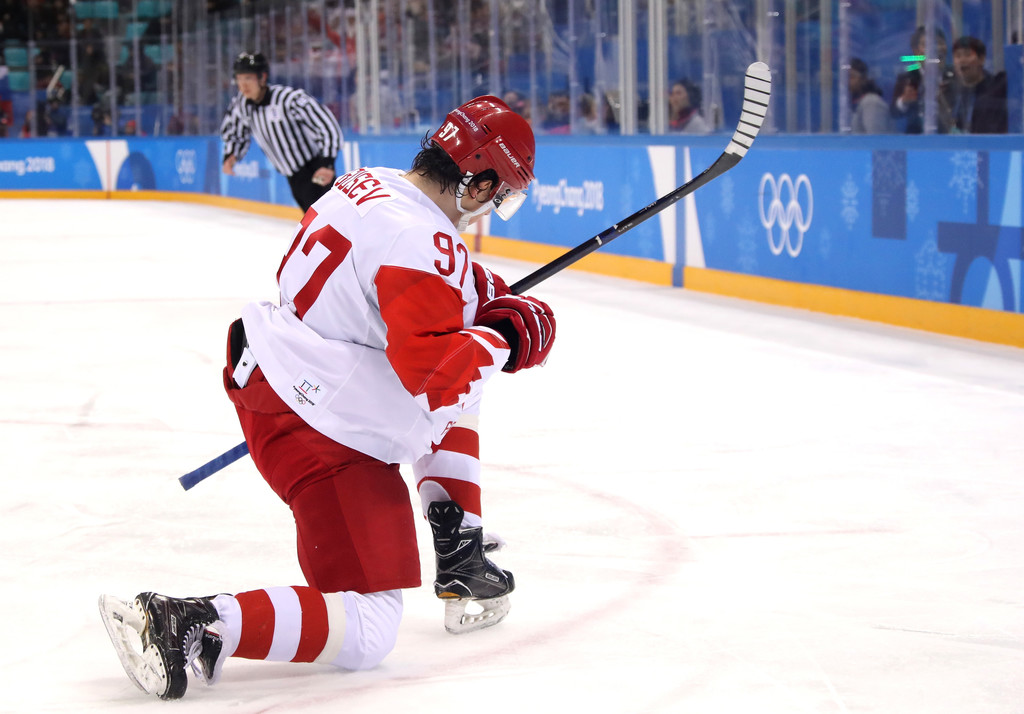 "I know (Artemi) Panarin does a weird tape job," Zach Aston-Reese said. "He doesn't even really tape his stick."

Looking at pictures, Panarin tapes just the toe of his blade in one color, and has a single strip across the bottom: 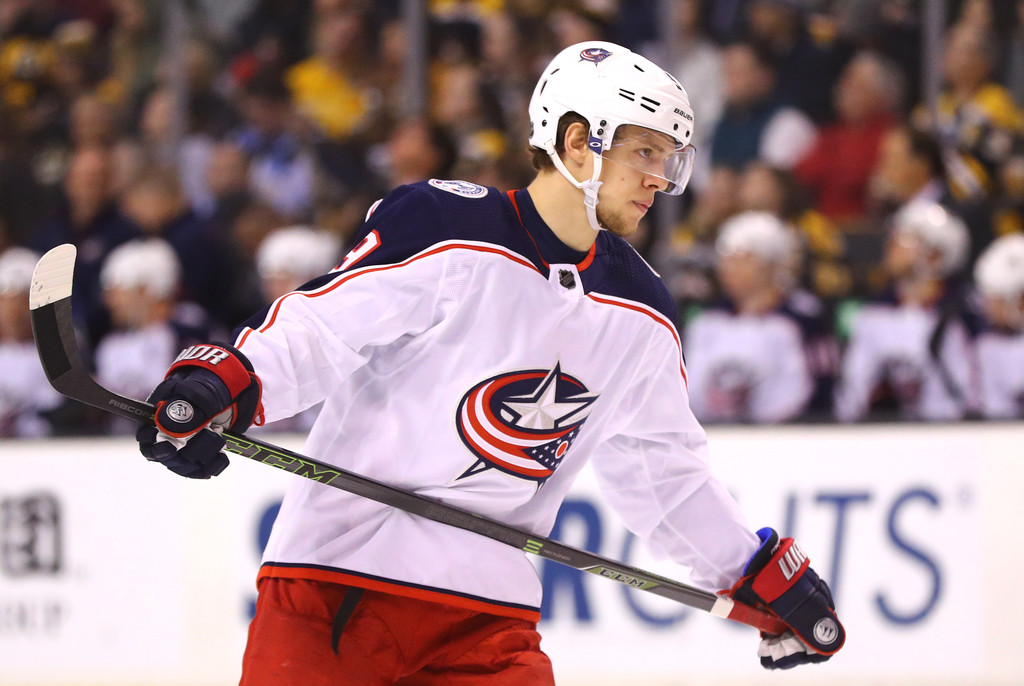 "The weirdest one is probably Tyler Bertuzzi, though," Aston-Reese continued. "He doesn't even tape the knob. Just nothing, then the blade is sandpaper over the blade."

Other guys have unique tape patterns on the shaft of their stick. "(Phil) Kessel, he had like the candy cane," Pettersson laughed. 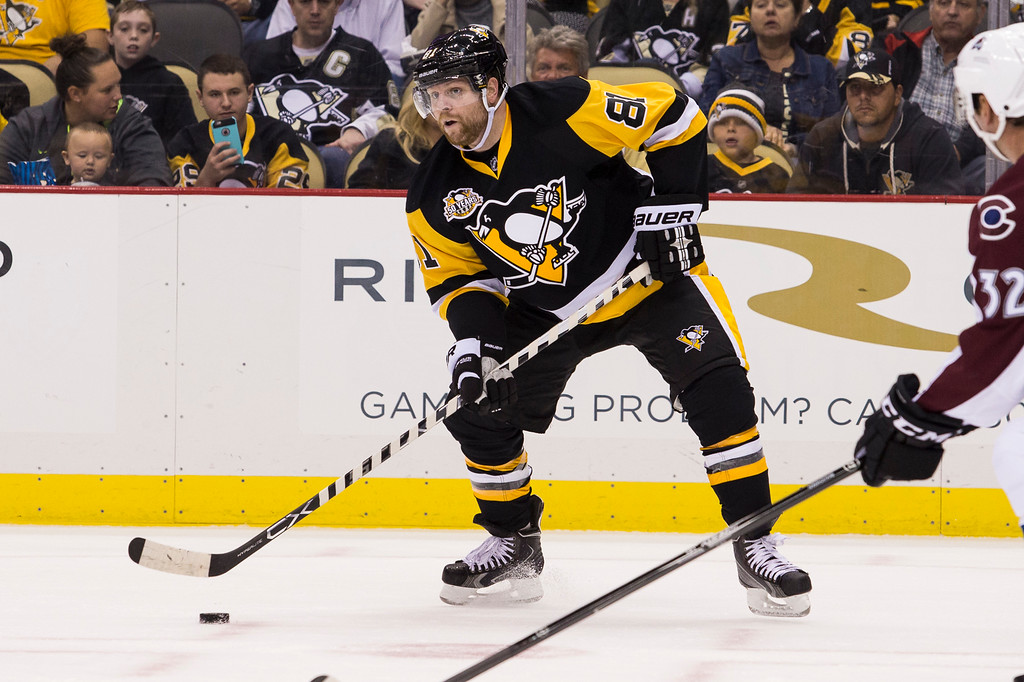 Now, I have to be honest. My inspiration for writing this came after watching Wilkes-Barre/Scranton games and seeing the way one specific player tapes his stick. So, I wasn't surprised to hear that prospect's name pop up from the recent call ups.

Andrew Agozzino and Sam Lafferty were sitting next to each other in their stalls, so I asked both of them for their answers at the same time.

They looked at each other, and Lafferty immediately said, "Oh, I know mine. Jan Drozg."

"That's what I was going to say!" Agozzino laughed. "That's the weirdest I've seen."

Drozg, a 20-year-old Slovenian forward, is a rookie on Wilkes-Barre this season and was the Penguins' fifth-round pick in the 2017 draft.

"He puts a little bit of white tape on the toe," Agozzino said.

So, pretty similar to how Panarin tapes his stick: 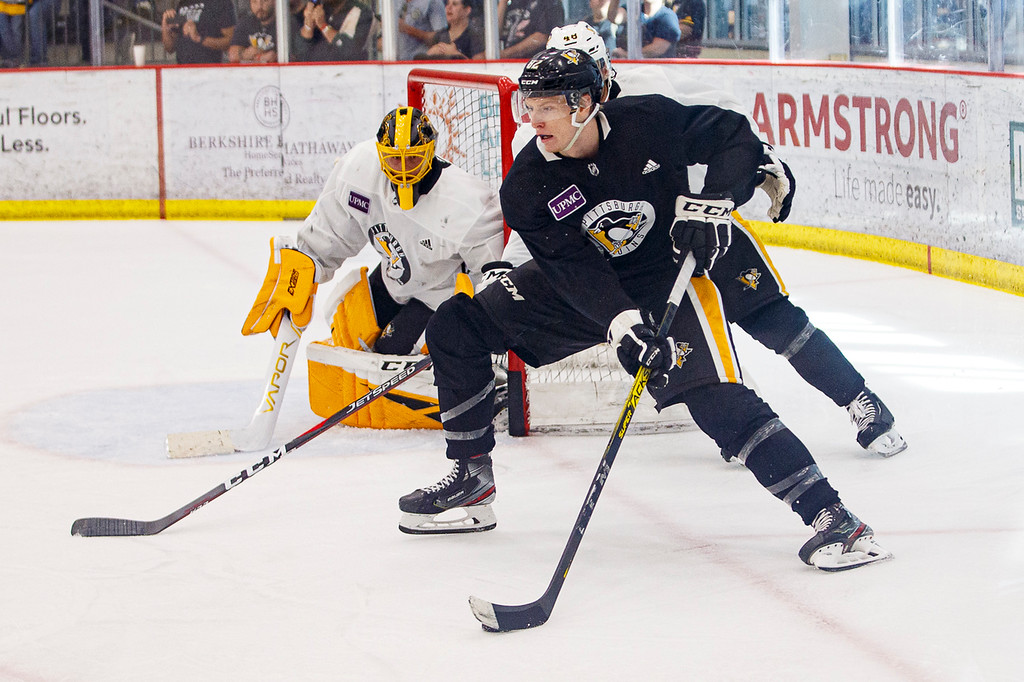 I then went over to Anthony Angello's stall, and asked him the same question.

"I'll tell you, one of the guys down in Wilkes, Jan Drozg," Angello said. "Hey, if it works for him, then go for it."

I spoke to Drozg earlier and asked about his tape job, and he explained himself.

"My tape job is kind of special I think, I don't see a lot of players do that kind of tape job," he laughed. "I do black tape horizontally from the beginning of the blade to a little across the middle of the blade. Then I go with white tape at the end."

Drozg said he first saw Panarin (a player with whom he shares the same agent) tape his stick with that design. Drozg then taped his stick in that way at the World Championship last spring, and it just stuck.

"The first game with the tape job I scored four points," he said. "Next game, I do the same tape job, I score four points again. That's big for the World Championship. I liked it, so I started the season with it."

Did the tape job itself really have anything to do with that success?

"It doesn't help you on the ice or do anything different," Drozg explained. "You feel the puck the same way, you shoot the same way, everything is the same. It's more mental stuff why I have that. I like it, I like the way it looks. I don't see a lot of players do it."

Right now, the design is a little bit of a superstition, and he might change it up in the future.

"Some players find that tape job weird, some players like it," he said. "I mean, it depends on the player. I don't know. I change my tape job a lot, so probably in other seasons or something you'll see me with a new tape job. We'll see, it depends on how it goes. I like to change. But for now, this is my special one," he laughed.