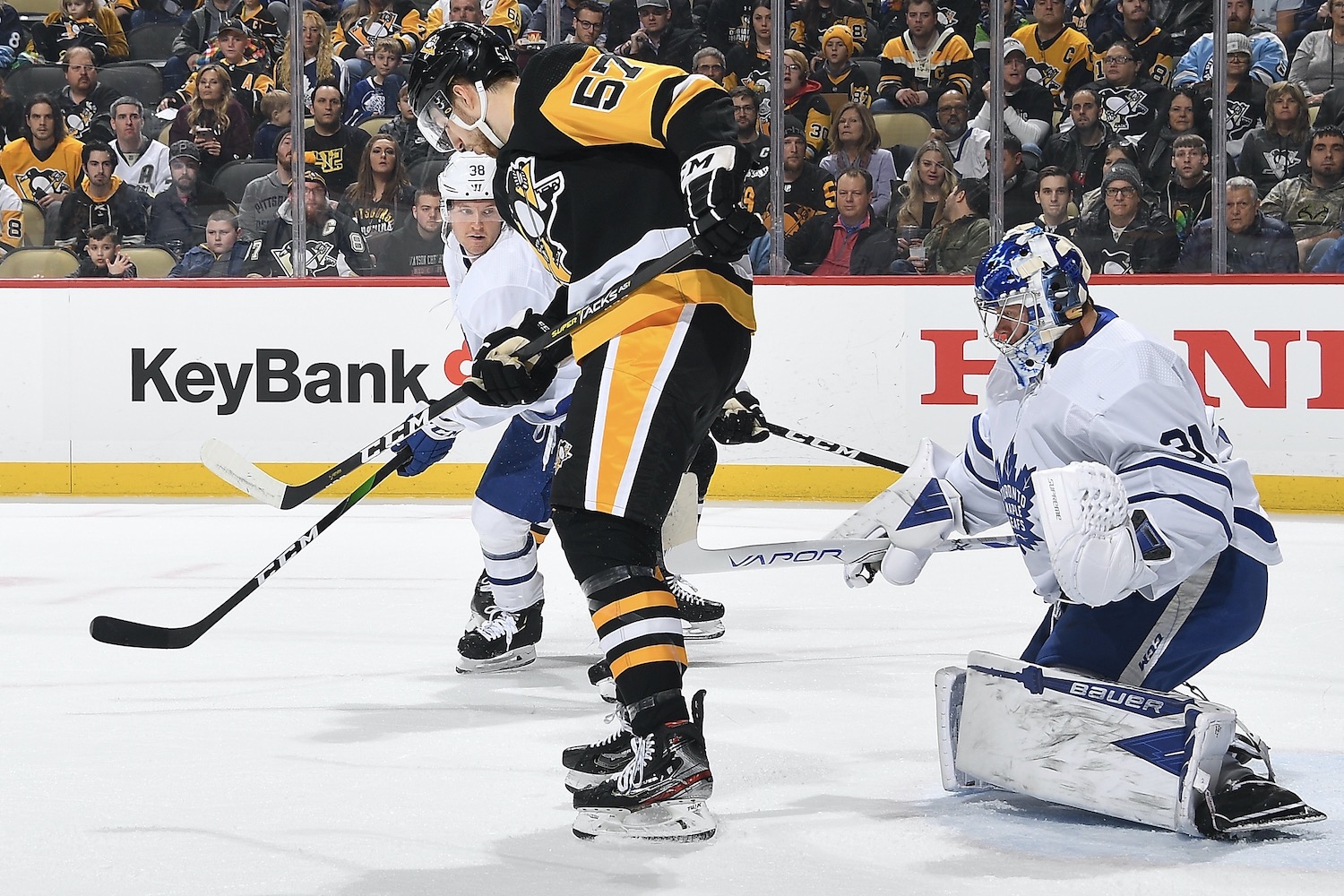 Anthony Angello wasn't even supposed to be in the Penguins' lineup on Tuesday.

He was set to be a healthy scratch against the Maple Leafs. Just before warmups, though, Mike Sullivan was told that Evgeni Malkin was ill and questionable for the game.

"I still had the same routine," Angello said. "I was doing warmups originally, and then they said, 'Hey, be ready to go, Geno isn't feeling well.' I went out for warmups prepared like I was going to play, whether I was or not."

Midway through warmups, it was decided that Malkin would be unable to play, and Angello was in.

"I don't think I had any nerves," he said of dealing with the situation. "If anything, I was having fun with it. I was a bit looser than I typically am when you have the whole day to think about it."

Before the game began, Angello received some strong words of encouragement (or premonitions) from two people.

"I've got to give it up to McCann here," Angello said, nodding to Jared McCann in the neighboring stall. "Right before the game he said, 'Hey, I got a feeling that you're going to do something.' He was right."

Then once on the bench, some words from the coach.

"I said to Anthony Angello on the bench right after the national anthem," Sullivan said, "I said sometimes when you get a call out of the bullpen like you did, sometimes you play your best games."

"He was right," Angello said.

With 2:57 remaining in the first period, Sam Lafferty took a shot from the point. Angello redirected the shot down and through Frederik Andersen's five-hole for his first NHL goal:

"It's nice when you go to the front of the net," Angello said. "(Lafferty) had a nice shot and it hit me, I looked for the rebound and I turned around and it was in the net."

The reaction from all involved was great, with Angello's massive gap-toothed smile as he was being mobbed by his teammates on the ice and on the bench afterward:

"It was awesome," Angello said. "It's a dream come true to play in the NHL, and then it's another to score."

"We were thrilled for Anthony," Sullivan said.

The goal came in Angello's fifth NHL game, and his first since Feb. 8 after being bumped out of the lineup as the forwards begin to get healthy again. Since being relegated to a healthy scratch, Angello has still kept a great attitude in the locker room and worked hard in practice, staying out on the ice well after the end of formal practices. The weird turn of events was a well-earned reward for the time he's been putting in.

"I think one of the things my dad told me growing up was that the harder you work, the luckier you get," Angello said. "I've been working really hard to get into the lineup. Then you get that unknown bounce where you get into the lineup, and then you get a nice bounce off your stick for it to go in. I'm just going to keep my head down and keep working hard."

• Brian Dumoulin was at the rink Tuesday morning in a track suit in the locker room.

• The Oilers, Stars, Rangers, and Devils all had scouts in the building.

• The ceiling in the locker room started leaking a lot of water after the game right over Justin Schultz's stall, sending the equipment staff running to try to figure out why. Sidney Crosby seemed concerned.

• Angello is the 27th individual player to score for the Penguins this season.

• Malkin (896) is 19 games away from tying Mario Lemieux (915) for second all-time in Penguins franchise history in games played.

• Crosby (315) is five even strength goals away from tying Jagr (320) for second all-time in franchise history.

• Matt Murray (192) is four games away from tying Les Binkley (196) for fifth all-time in franchise history in games played by a goaltender.

• Sidney Crosby on the Penguins' success: "I think just everyone's contributing, and our work ethic, and urgency, has been there every night. We give ourselves a chance when we have that. So I feel like there's still areas we can improve on, but I think the way everyone's getting involved, I think the work ethic always sets the tone for everything else."

• Sullivan on Crosby's effect on the power play: "He just has such great instincts and he makes great plays. He's one of those guys who just has vision. He can see the play, anticipate the play, two or three passes in advance. We always talk as a coaching staff that Sid plays chess while the other guys are playing checkers. That's just the kind of player he is. He's just a such smart player and he has such great vision and he can create offense in different ways. He's dangerous off the rush, he protects the puck so well. Some of the passes he made tonight are an indication of it."

• The loss was the Leafs' second straight and brings their record in their last 10 games to 4-5-1.

• Andersen has now allowed a combined 13 goals in his past three starts.

• Toronto coach Sheldon Keefe: "You have a team over there (in Pittsburgh) that's built a championship culture and what's acceptable, and we're not there. That is something, the inexperience. But we also have some very experienced players that should be more than capable of leading the way."

• Auston Matthews "We've got 20-plus games left. We need to have more urgency in our game. Come in on time. Have to start playing some good hockey here and really figure it out in this locker room going forward."