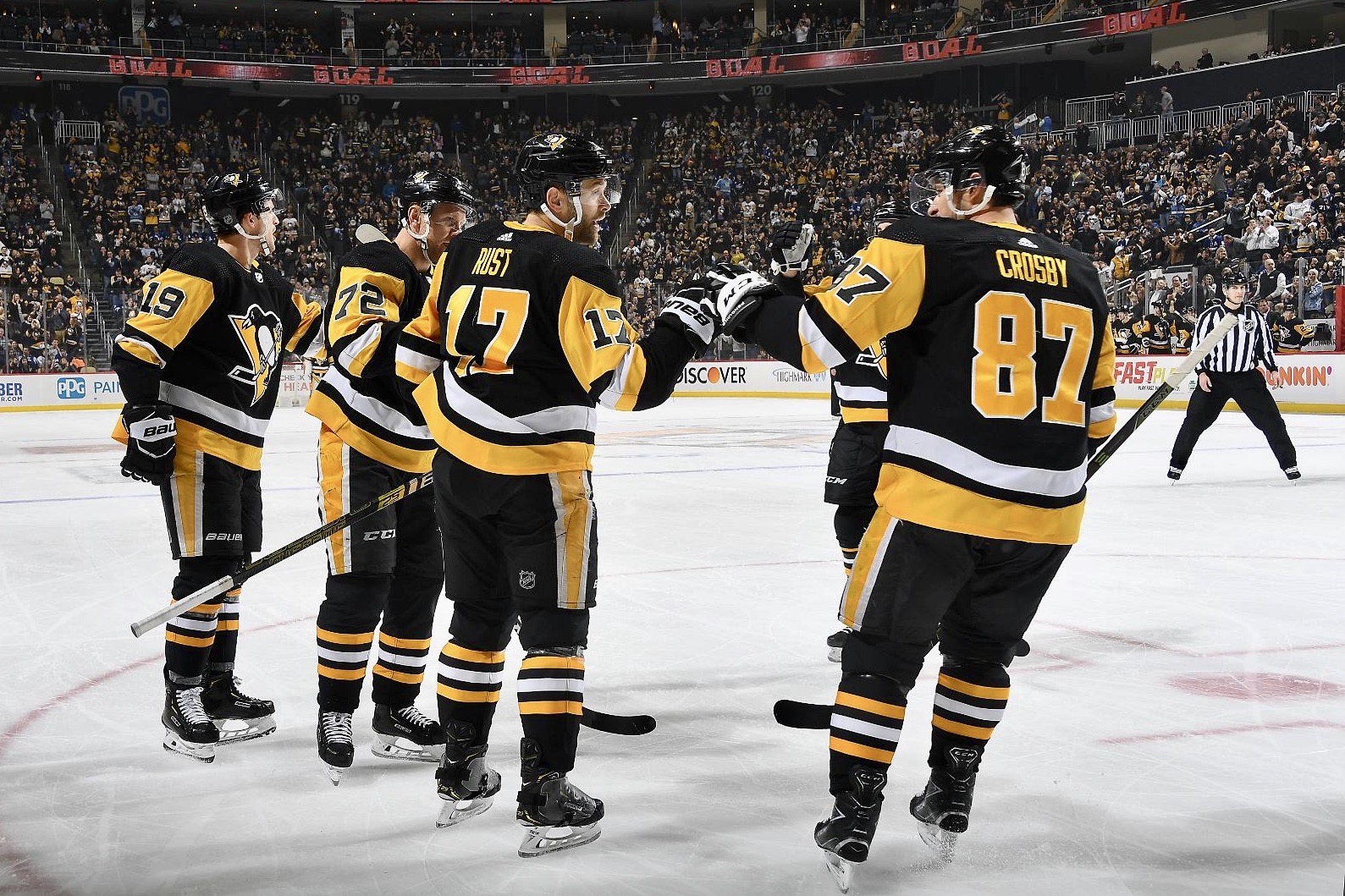 And with good reason.

But not this club.

Not this season, anyway.

When a group has endured all that the Penguins have gone through since last autumn, finding out that it will be without its leading scorer mere minutes before a game is to begin doesn't provoke anything more dramatic among teammates than a shrug of the shoulders, and perhaps an eye roll or two.

And so it was Tuesday evening at PPG Paints Arena, when Evgeni Malkin removed himself from the ice partway through warmups before the Penguins' 5-2 victory against Toronto, prompting Mike Sullivan to scratch him from the lineup a few minutes later.

The Penguins were so unnerved by losing Malkin that they scored the first five goals of the game, including one by Anthony Angello. He had been scheduled to be a healthy scratch, until Malkin became an unhealthy one.

"I said to Anthony Angello on the bench right after the national anthem that, 'When you get a call out of the bullpen like you did, sometimes you play your best games,' " Sullivan said.

Add that to the long list of good calls Sullivan has made this season, because the game was barely 17 minutes old when Angello scored the first goal of his NHL career:

That goal was Angello's only point of the game, but that was understandable because Sidney Crosby, who Sullivan labeled "the most complete player in the game," didn't leave many around for others to claim. He scored one goal and set up three others for his 34th career game with four or more points.

"I think he's getting better with every game he's playing," Sullivan said. "I think this is his favorite time of year, also. He tends to play his best when the stakes get high."

While it was pretty much impossible to overlook Crosby's role in this victory, Tristan Jarry's contribution might not have been apparent to some. After all, the Penguins built a 5-0 lead and the Maple Leafs never got closer than a field goal after that.

The reality, though, is that Toronto had a 36-24 advantage in shots, and could have gotten back into the game after Auston Matthews and Kyle Clifford scored late in the second period if Jarry hadn't been sharp.

Toronto coach Sheldon Keefe volunteered that, "their goaltender was better than ours," and Sullivan stopped just shy of suggesting that Jarry pretty much had to be if the Penguins were going to squeeze two points out of this game.

"We could have been a lot better in certain defensive situations," he said. "When we did break down, Tristan was there to make some real timely saves."

The Penguins' five-goal advantage was built largely on a foundation of exceptional special-teams play. The power play was 3-for-3, with goals by Bryan Rust, Jason Zucker and Crosby:

The penalty-kill was 4-for-4, including one 79-second stretch during which the Maple Leafs had a two-man advantage.

"Our penalty-kill has been great," Rust said. "It was huge tonight."

Malkin, of course, is an integral part of the No. 1 power-play unit, but Jared McCann filled in nicely for him there, much as he did in the middle on the No. 2 line. McCann had been scheduled to play left wing with Malkin and Rust in 5-on-5 situations, but shifted to center when Malkin was scratched.

Dominik Kahun, who had missed the previous eight games because of a concussion, had been penciled in on the fourth line, but was bumped up to McCann’s spot on the second unit, which in turn opened a place for Angello.

If it all seemed to go rather seamlessly, it's probably because the Penguins have had so much experience patching together personnel combinations this season. Malkin's unspecified illness swelled their total of man-games lost to 246, and his coworkers responded to his absence the same way they had the other 245: They made a few adjustments, then went about the business of winning a hockey game.

"A lot of stuff has gone on, and we've persevered through it," Sam Lafferty said. "We just keep plugging away, whatever happens."

That's a big part of the reason they're 37-15-6 today, but victory No. 37 was particularly significant because it boosted the Penguins past the Capitals and into first place in the Metropolitan Division.

They also have a game-in-hand on Washington and, while sitting atop a division on Feb. 19 isn't cause to put in a rush order for a banner, it's a pretty fair accomplishment for a team that has had its lineup of choice intact for only part of one of its 58 games to date.

"It's something I guess we're kind of used to," Jarry said. "Different guys stepping up."

That's something Toronto, which is clinging to third place -- and the final guaranteed playoff berth -- in the Atlantic Division, would like to have a little more often. Sullivan noted that the Maple Leafs have "some dynamic forwards," but the Leafs' team defense is porous and there were times when they barely seemed interested, let alone involved.

"There's no excuse for tonight, whatsoever," Keefe said. "We just weren't there."

That almost never has been a problem for the Penguins this winter, perhaps because they've recognized that with so many key players missing so many games, they wouldn't be competing for anything more than their spot in the draft order if everyone didn't fill his role effectively and operate within a disciplined structure.

"When key players go down -- a guy like (Malkin) or Sid or (Kris Letang) or some of the guys we really rely on, night-in and night-out, I think everyone understands that we all need to step up, as a group in order to fill that void," Sullivan said. "You just don't replace those guys. Maybe the silver lining in all the adversity we've faced this year, with regard to some of the injuries, is that we've discovered an identity that we can play to that brings us success. We've got a lot of evidence to suggest that when we play a certain way, we're pretty competitive."

Competitive enough to be looking down at the rest of the Metropolitan Division today.