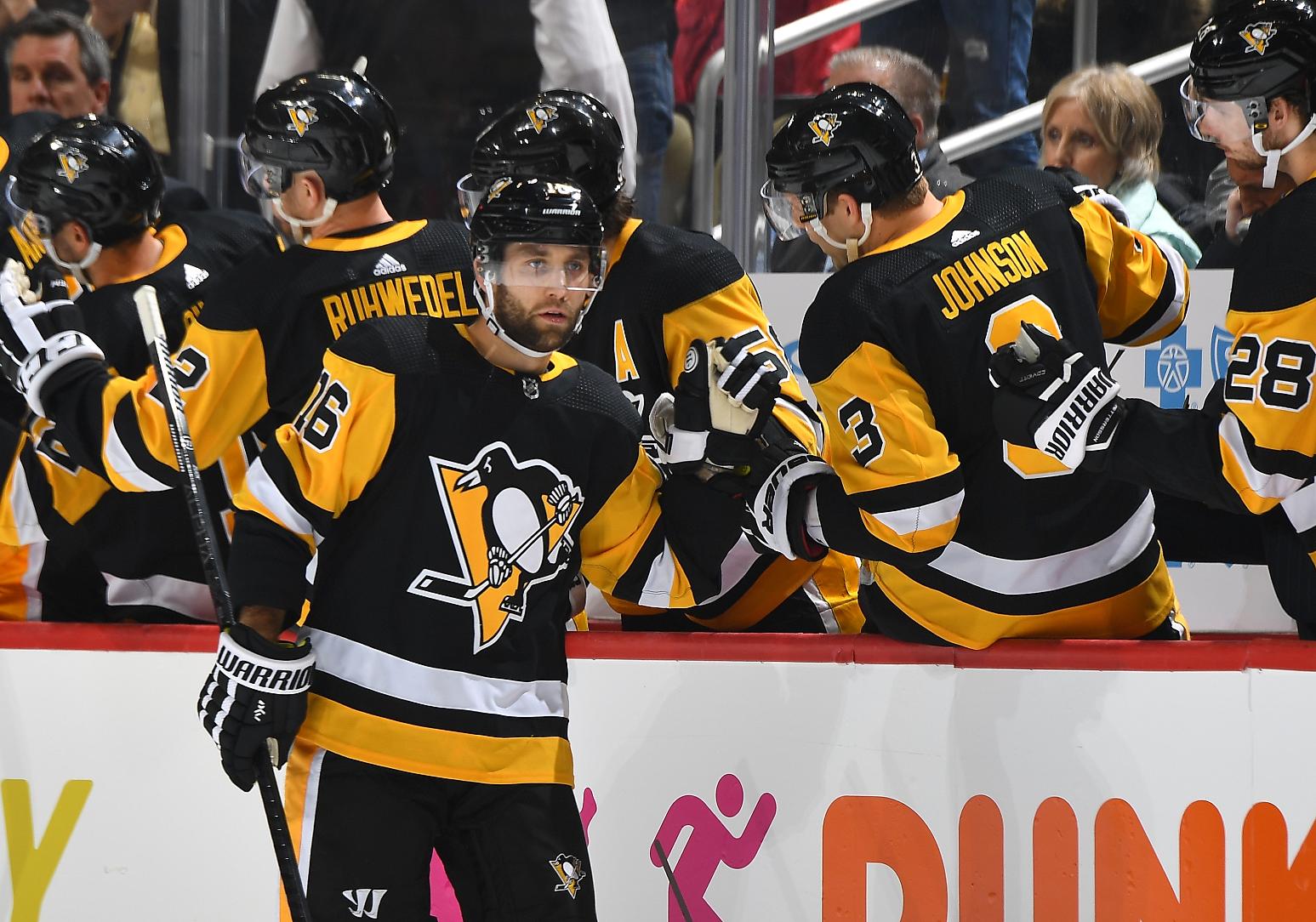 CRANBERRY, Pa. -- The partnership is still in its embryonic stages, so it's a little early to say with certainty how Sidney Crosby and Jason Zucker will mesh as the season moves along.

The early results certainly have to be encouraging, though, because in their four games as linemates, Zucker has three goals and one assist, while Crosby has put up two goals and eight assists.

Especially if Zucker is correct that those two, along with right winger Dominik Simon, should be able to continue to elevate their game.

"I think we've done some really good things, but I think there's room for improvement," he said after practice today. "He's playing at a really high level now -- he's playing some great hockey, obviously -- and I'm trying to make sure that I'm using my speed, using my assets, to try to create some space, create some scoring opportunities."

Zucker's speed is one of his most striking assets, and one of the qualities that prompted Mike Sullivan to consider him as a linemate for Crosby.

"We try to find a combination of speed and guys who have tight-area skills, who can thrive in traffic," Sullivan said. "Because that's where Sid thrives. He's so good at that give-and-go game down below the goal line or underneath the hash marks."

Zucker's skating is invaluable because he can use it to push defenseman back toward their net, giving Crosby more time and space to create scoring opportunities for himself and his linemates.

"If I give him that extra second to make a play by pushing the (defenseman) back, it's going to make things a lot easier for everybody," Zucker said. "He makes some unbelievable plays out there, especially when he has that extra second."

There's no guarantee that Crosby and Zucker will be together for an extended period -- "We have a number of different candidates on our roster that we try to surround (Crosby) with," Sullivan said -- Zucker has been effective in the past working with quality centers, like Eric Staal.

"I played with a lot of great players in Minnesota," he said. "I'm just going to continue to try to mesh with (Crosby) as well as I can. Continue to talk to him, see what his tendencies are, what he likes in certain situations and try to build from there."

• Brian Dumoulin, out since tendons in his left ankle were sliced during a game in St. Louis Nov. 30, worked out on the ice for about a half-hour before his teammates practiced:

Sullivan said it was the second time Dumoulin has skated since his injury was surgically repaired a day after he was injured. "He's, I think, tracking the right way," Sullivan said. "The fact that he's on the ice right now is real encouraging." There is no timetable for Dumoulin to rejoin the lineup.

• Evgeni Malkin, a late scratch before the Penguins' 5-2 victory against Toronto Tuesday night because of illness, did not participate in practice but accompanied the team to Toronto. "We're hopeful that he'll be feeling better," Sullivan said.

• The Penguins summoned defenseman Zach Trotman from their farm team in Wilkes-Barre on emergency recall, which suggests a defenseman was injured Tuesday, but all six who played against the Maple Leafs participated in practice Wednesday. A player can be brought up on emergency recall only if a team believes it will have fewer than 12 healthy forwards or six healthy defensemen. "We have a few defensemen who are a little bit nicked up," Sullivan said. "We thought that when we traveled on the road, it would make sense to have an extra (defenseman)."

• Although the Penguins have two lopsided victories against Toronto this season, Sullivan cautioned against expecting those results to carry over to Thursday night. "Every game is its own entity," Sullivan said. "I don't think there's anything you can read into (previous results)."

• The Penguins used the same personnel combinations in practice that they'd deployed against the Maple Leafs: