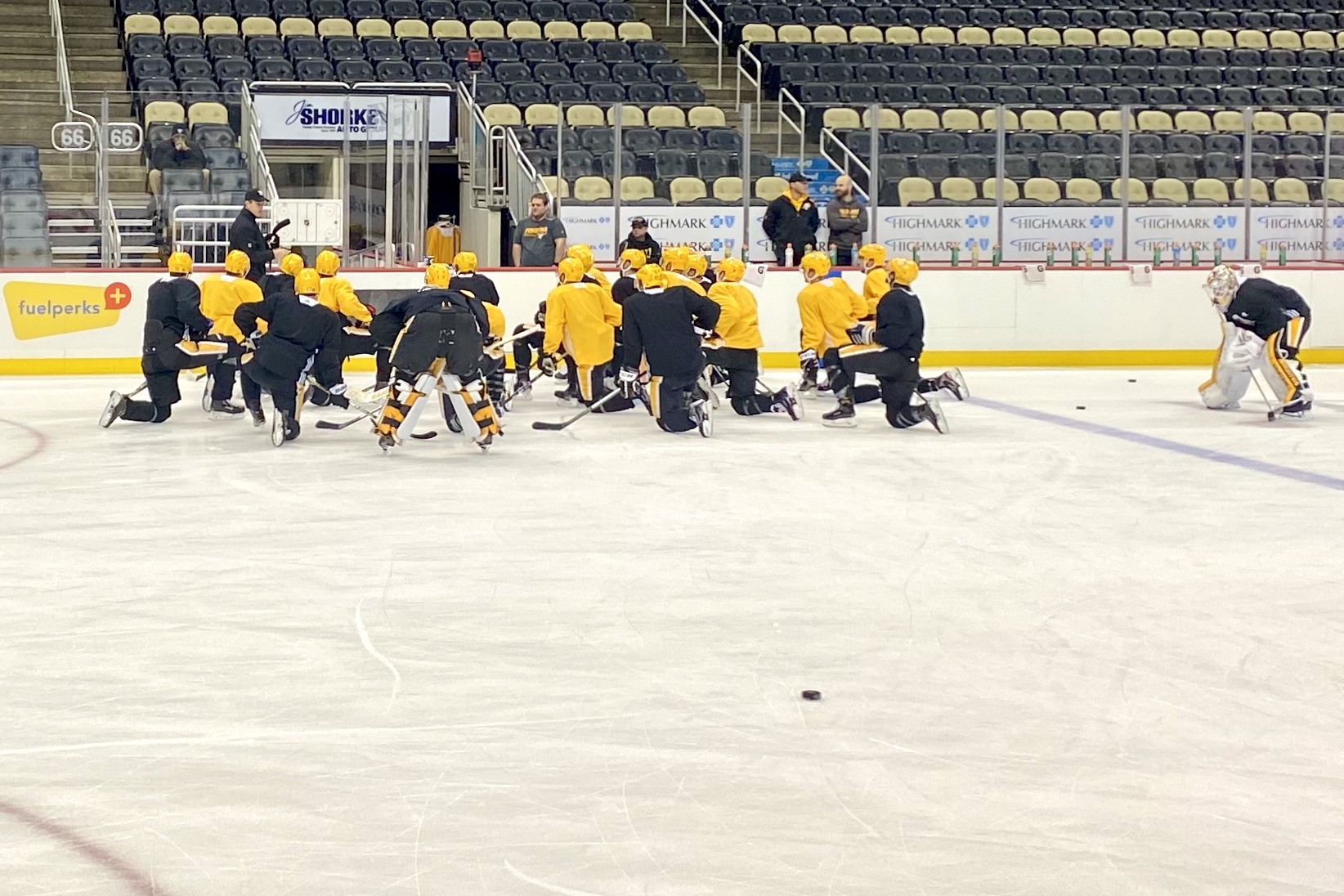 Dominik Kahun didn't dodge the puck that dropped him Thursday night in Toronto, a shot that appeared to catch him on the left knee, but he might've dodged a bigger bullet.

After he was held out of the Penguins' practice Friday afternoon at PPG Paints Arena, Mike Sullivan downplayed Kahun's injury in saying, “Right now, his status is just day-to-day. So we’ll take each day as it comes. We’ll see how it is tomorrow. He’ll be a game-time decision,” meaning for the Saturday home matinee against the Sabres. All I'd asked about was Kahun's status, so the unsolicited information about the Buffalo game could be taken as an encouraging sign.

This was the Denis Malgin shot with 5:49 left in the third period of that 4-0 loss Thursday:

Yeah. Ow. Kahun would stay down for more than a minute and needed significant help getting off the ice, then down the runway.

But it isn't even that precedent that gives off the sense, at least from this perspective, that the next rebound will be right away.

That's the planet's best hockey player, pumping away at pucks being fed to him by Ty Hennes, the team's skills coach. This was a few minutes before Sullivan had begun formal drills.

Nothing new there, of course. But then, that's the point.

Because when Sidney Crosby was done there and those drills began, he was buzzing around with the rest of the boys ... with the broadest of smiles. Same with Evgeni Malkin, who wasn't just scoring on Tristan Jarry but also celebrating with enough gusto he might've been heard out on Centre Avenue. Same with Patric Hornqvist, who'd eventually bump Jarry from the crease to take his own turn there, albeit not a terribly fruitful one.

After which Hornqvist, Marcus Pettersson and both goaltenders stayed on the ice for an additional half-hour to engage in a silly game of long-shot. Once it was finally complete, Pettersson strode in front of Hornqvist into the locker room with both arms raised.

"Champion!" Pettersson exclaimed to no one in particular.

A lesser collective tightens up. This one loosens up, then buckles back down.

"I think it's a great group of guys mostly in the sense that we've got great leadership," Brandon Tanev was telling me afterward. "When things don't necessarily go our way, like they didn't in Toronto, our leadership's able to get us in the right mindset and then get ready to go for the next one."

And this is how. Not through berating. And definitely not through burying what happened. But with a smile.

Sure, Crosby spoke bluntly about the Penguins' need for a better, more consistent forecheck.

"I think we'd like to spend less time in our zone and make sure we aren't giving up the quality of chances that we are," he'd say. "But that just comes down to execution and work ethic, and that's something we should be able to influence pretty quickly."

"I mean, it's hard to shake off a loss like that sometimes because, you know, that's your life," Dominik Simon told me. "But you have to. You have to forget about it as soon as possible and move forward. We've got guys in here who lead the way with that. You can see how professional they are, and that helps so much."

"How you deal with adversity always starts with your leadership," Chad Ruhwedel would essentially echo. "Our leaders' focus is always about getting us ready and pumped for the next game. Because that's how they handle it. Their confidence becomes our confidence."